UNITED NATIONS, Mar 2 2010 (IPS) - Despite having equality on paper, women continue to be shut out of most leadership positions in the United States, and some experts say that the persistence of language in which male is the default gender is an overlooked factor. 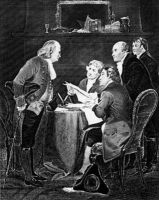 Drafting of the U.S. Declaration of Independence. Perhaps not coincidentally, the 1776 document states that "all men are created equal." Credit: Copy of engraving by Alonzo Chappel

In the U.S. government, women occupy 16.8 percent of the 535 seats in Congress – 17 percent in the Senate, and 16.8 percent in the House of Representatives – according to statistics published by the Centre for American Women and Politics (CAWP). Some 22.9 percent of the available statewide elective executive offices are occupied by women, and of President Barack Obama’s cabinet of 20 members, four are women.

Gender disparities in the private sector are even more acute.

According to a census taken by Catalyst, an organisation working for greater gender equality in the workforce, women represented only 13.5 percent of the executive officer positions at Fortune 500 companies in 2009, with women holding 6.3 percent of the top earner positions.

Catalyst also found that less than one-fifth of these companies have three or more women in executive positions, and almost one-third of companies have none.

Janet Jakobsen, a professor at Barnard College and the director of the Barnard Centre for Research on Women, says the language we use may play a role in some of these disparities.

“If you look for example at Fortune 500 companies, there is a really serious gender gap that continues,” Jakobsen told IPS.

“What the research shows is that the way that this is produced is not through active ‘I dislike women, I’m going to exclude them from the workplace,’ but simply from the set of assumptions that people go into the workplace with,” she said.

“So when you imagine ‘OK, there are 17 resumes before me for a job, and I see a man and a woman – pretty much the same things, but I can more easily imagine this man doing this job,’ that’s an unconscious bias, it’s an assumption. One of the things language does is to help construct those unconscious biases,” Jakobsen said.

Senator Kathy Sgambati, a Democrat from New Hampshire – the first of the 50 U.S. states to have a legislative body governed by a majority of women – agrees that language is significant in forming opinions about gender. She is in the process of sponsoring a bill that would amend the constitutional language of New Hampshire from gender exclusive to gender-neutral.

“I have watched tours of fourth graders go through the Senate and they always gasp when they are told women are in the majority,” Sgambati told IPS. “It concerns me, because I think when they study the constitution, there are some young girls that don’t see themselves in it,” she said.

“Because of the language, they see governing as expected to be a male-dominated organisation, and it’s not,” Sgambati said. “In New Hampshire, women have a very long history of serving in the House and the Senate.”

“This kind of inclusion does matter,” Jakobsen told IPS. “And it matters especially for people who can grow up and imagine themselves as the leaders of our government, as included in these legal documents.”

At the United Nations, where gender equality ranks highly as one of the eight Millennium Development Goals, gender inequity within the organisation persists. One U.N. employee, who spoke to IPS on the condition of anonymity, said the U.N. “has a long way to go in terms of achieving true gender balance,” particularly in high-ranking jobs.

“I often tell colleagues that an organisation that is supposed to defend and promote human rights should do more to make the role of women more visible. That’s why I am outraged at the gender neutrality of the High Commmissioner’s title,” she told IPS, referring to the French translation of the title, which is “Le or La Haut-Commissaire aux droits de l’Homme,” whereas the feminine form would be “La Haute Commissaire aux droits de l’Homme.”

“We should be proud to say it’s a woman! De-genderising the title is a way of saying – in my opinion – that the feminine form would somehow be inferior,” she said.

“I think forums that try to use gender-neutral language have often gone a long way in terms of gender balance and equity. My perception,” she said, “is that the U.N. is not there yet. I think that reflects the spectrum of national realities in member states.”