ROME, May 21 2010 (IPS) - Biodiversity in agriculture is about culture. Traditional knowledge and culture are as important as research and investment, say farmers, researchers and academics gathered in Rome for the International Day for Biodiversity on Saturday. 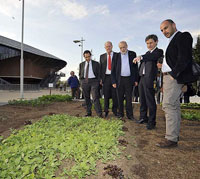 Bioversity points out that there are about 30,000 edible plant species, of which three — rice, wheat and maize — provide 60 percent of calories for human beings. But the value of these staples is hardly recognised.

“When you talk about biodiversity people around the table are essentially from ministries of environment, and they come from a background of nature conservation and protection,” director-general of Bioversity International Emile Frison tells IPS. “For them, traditionally, agriculture has been the enemy, the one that encroaches on the environment.

“What we realise today is that there is much greater attention to biodiversity in agricultural ecosystems and also to agricultural biodiversity itself. We can no longer just care about protected areas, we must look at how we can make the entire biodiversity more useful to people.”

The international year on biodiversity is hardly the time to forget agricultural biodiversity and the farmers who sustain it, says Antonio Onorati of the International Planning Committee for Food Sovereignty, a global network of civil society organisations concerned with food sovereignty issues and programmes.

As not just the custodians of biodiversity but its creators, farmers ask “to be responsible for the diversity of what we plant, producing our seeds, creating new varieties in cooperation with researchers,” Onorati said. Participatory plant breeding, as this is sometimes called, aims to ensure that research is directly relevant to farmers’ needs.

“The virtuous conservation practices of thousands of food communities can really compete with the big economic entities, and with the market,” says Petrini. “In this sense they are an economic subject, not a political subject, though they are not heard by decision-making powers.”

Women can have a big role to play here. In the Italian community of Teramo in Abruzzo region, “for centuries women have done the so-called ‘virtues’ in May; they collect all the leftovers from the winter such as dried fruit or leftover pork. When spring arrives, all this food is put together and cooked with fresh vegetables in a dish called virtu teramane, which is a masterpiece of flavour and represents the fight against food wasting. The message is no food must go waste.”