BOGOTA, May 14 2010 (IPS) - The death threats against Catholic priest Javier Giraldo painted on walls in the Colombian capital may have come from far-right paramilitaries, the military, drug trafficking gangs or groups with interests in African oil palm plantations. 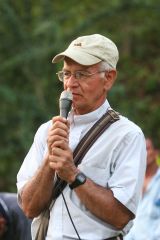 Nor can it be entirely ruled out — even if it is a remote possibility — that they were spray-painted by left-wing guerrillas. After all, the first people killed in the San José de Apartadó Peace Community, which Giraldo supports, were slain by a faction of the Revolutionary Armed Forces of Colombia (FARC) that dominated that part of the northwestern province of Antioquia.

Despite the powerful enemies he faces, Giraldo, a dedicated human rights defender, refuses police bodyguards. Besides his total distrust of anyone who carries a weapon, Giraldo has said he could not bear it if someone else were injured or killed during an attempt on his life.

His distrust of armed groups was accentuated when he began 15 years ago to advise and support 600 rural families who had settled a strategic spot in Urabá, a resource-rich Caribbean coastal region of Antioquia.

The bishop of the local diocese, Isaías Duarte, warned them: “You will be expelled from here because this is a corridor of war.”

The families were living along a route to the gulf of Urabá, on the border with Panama — a strategic drug, arms and contraband smuggling route.

Back then, in 1995, the military offensive to push them out of the region had already started. The bishop, who was murdered in March 2002, advised them to declare themselves a peace community.

In March 1997 they did so, in the presence of international observers. The community declared that they did not support any side in the armed conflict, and would not allow anyone carrying weapons to enter their territory.

They immediately drew the ire of the guerrillas, the paramilitaries and the army alike. And big agribusiness interests, egged on by the negative propaganda against the community, began to see them as a subversive group with ties to the leftist insurgents.

Giraldo and the organisation he founded, the Inter-Church Justice and Peace Commission, have been outspoken critics of military and paramilitary abuses in Colombia’s nearly five-decade armed conflict, which is largely rooted in disputes over land and the heavy concentration of land ownership.

Although land reform was outlined in a law passed under President Alfonso López Pumarejo (1934-1938) and implemented under President Carlos Lleras Restrepo (1966-1970), large landowners have consistently fought and undermined such efforts.

In San José de Apartadó, Giraldo clearly saw the power of the oil palm business which, in alliances with the military and paramilitaries, drove local peasants away to seize their land.

As the families fled the intimidation and violence, huge bulldozers came in to destroy everything, even the cemeteries. “The people who came back after six or seven years didn’t recognise their land, which was crisscrossed by irrigation ditches,” the priest said in an interview for this article.

“In a small town called Santa Lucía I tried to find the cemetery, but everything had been demolished,” he added.

Another problem that emerged was corruption in the army, which had ties to the paramilitaries and was often at the service of the oil palm growers.

“The connection between the army and the paramilitaries was very obvious. General (Rito Alejo) del Río’s Genesis plan had been drawn up with an eye to local populations where the guerrillas might have an influence,” Giraldo said.

Operation Genesis was designed to pacify Urabá “by fire and sword” in 1997, leaving dozens dead and thousands displaced.

At the start, San José de Apartadó was a bastion of the left-wing Patriotic Union and Communist Parties — support that Operation Genesis was designed to castigate.

But in Giraldo’s view, the biggest weakness of all is the inoperative justice system.

“With the idea of not allowing abuses to go unpunished, because impunity breeds repetition, a large number of lawsuits were brought, and I gradually discovered that justice in Colombia is merely testimonial,” he said.

“They told me, bring the witnesses, and I convinced many peasants to testify. And after they gave their testimony, they were killed,” the priest said.

He then turned to the Inter-American Court of Human Rights. Under the pressure exerted by the regional court, 10 members of the military are about to be sentenced for the February 2005 killings of eight adults and three children in the San José de Apartadó Peace Community.

After the killings, right-wing President Álvaro Uribe ordered a police unit to be stationed in the middle of San José de Apartadó, despite the community’s protests.

When the first police vehicles showed up, the families fled with whatever belongings they could carry, to a plot of land along the road where they had their community crops and gardens.

They set up shelters in the area, which little by little, with the aid of European governments and NGOs, has turned into the village of San Josesito de la Dignidad.

Paramilitaries, some of whom were accused of taking part in the murders, have moved into the old community of San José de Apartadó. Bars, shops selling contraband merchandise, and guns have made their reappearance in the village.

Local media outlets report that in the 13 years since San José de Apartadó became a model of civil resistance, 197 members of the community have been killed and hundreds have been tortured, forcibly disappeared and displaced.

Giraldo’s solidarity with the peasant farmers and his outspoken opposition to the human rights abuses and crimes explain the threats.

“At first I was afraid, but now the threats have become routine. And besides,” he responded calmly, “when you compare it to what so many people have gone through, you see they are suffering much more.”