CAPE TOWN, May 18 2010 (IPS) - On May 18, Steven Monjeza and Tiwonge Chimbalanga, the two men arrested in December after their traditional engagement party, were convicted of “unnatural acts” and “gross indecency” under colonial-era laws that remain in Malawi’s penal code. 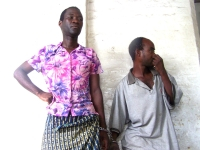 Chimbalanga and Monjeza (r) at their arraignment in January. Credit: Claire Ngozo/IPS

Sentencing is scheduled for May 20; the pair face as much as 14 years in prison.

Monjeza and Chimbalanga celebrated their traditional engagement on on Dec. 26 – a ceremony that is recognised as a civil marriage in Malawi. They were arrested two days later.

The two men were refused bail on two different occasions by the magistrates’ court. They have been taunted and jeered by crowds at every court appearance.

The state administered several medical tests on the couple to establish that they were having sexual intercourse as well as a mental examination to test if each is mentally stable.

Amnesty International points out that forcible examinations would be in violation of the absolute prohibition of torture and other cruel, inhuman and degrading treatment – and such evidence would not be admissible in a fair trial.

The case has attracted significant interest both within the country and abroad.

On Mar. 16, Malawi’s main donors, including the UK government, Germany, the African Development Bank (AfDB), Norway, the European Union and the World Bank, who operate under the Common Approach to Budget Support (CABS), warned Malawi against the prosecution of homosexuals. CABS provides up to 80 percent of Malawi’s development budget of 438 million dollars.

“When we talk about human rights, we do not only talk about the majority but also minority groups like the on-going issue of homosexuals which needs to be looked into thoroughly,” Frank Kufwakwandi, head of AfDB in Malawi and chair of CABS said in a statement .

“Respect for human rights is one of the fundamental principles of Malawi’s budget support cooperation from the CABS group,” he stated. The donor group also warned that that the country risks international isolation if it continues prosecuting homosexuals.

But the Malawi Council of Churches (MCC), a grouping of up to 22 protestant churches, is just one of many organisations that has urged government not to give in to donor pressure and respect gay rights in exchange for aid.

In a statement released on Mar. 19, the MCC called on the international community to “respect Malawi’s cultural and religious values and refrain from using aid as a means of forcing the country to legalise sinful acts like homosexuality in the name of human rights.”

The MCC also asked government to maintain the laws that criminalise homosexual acts and practices.

But human rights lawyer Chrispine Sibande says the arrest and prosecution of the gay couple is inconsistent with Article 20 of Malawi’s own Constitution, which states that “discrimination of persons in any form is prohibited and all persons are, under any law, guaranteed equal and effective protection against discrimination on grounds of race, colour, sex, language, religion, political or other opinion, nationality, ethnic or social origin, disability, property, birth or other status”.

Sibande argues that the Constitution is the supreme law of the land and guarantees freedom of conscience, privacy and expression which includes sexual orientation.

The constitution’s Article 5 states that where a law is inconsistent with the provisions of the Constitution, it is invalid.

“The gay suspects did not do anything wrong as long as they lived the without violating other people’s rights,” says Sibande.

The Centre for Development of People (CEDEP), a local human rights organisation which works for the welfare of marginalised groups, confirms that most homosexuals in Malawi are forced to hide their sexual orientation for fear of prohibitive and outdated laws that remain in force.

“It is not criminal to express your sexual orientation,” CEDEP director Gift Trapense told IPS in January. “And the laws being used are from the Penal Code which is against the human rights that are enshrined in the Constitution. This is a gross human rights abuse against a group of people.”

*Claire Ngozo in Lilongwe contributed to this report.