Pope’s Visit Finds Catholicism on the Decline in Portugal

LISBON, May 11 2010 (IPS) - Pope Benedict XVI began a four-day visit to Portugal Tuesday in an uncomfortable scenario for himself and his followers, amidst accusations that the Catholic Church leadership protected pedophile priests, and the free distribution of condoms by hundreds of protesters here. 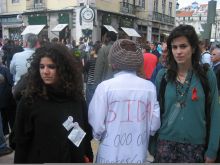 Although Portugal is one of the countries with the highest proportion of Catholics in the world, the number of faithful has been falling steadily since the mid-1970s. According to the latest census, carried out in 2001, half a million people said they had become agnostics.

While 84.5 percent of the 10.6 million people in this southern European country identify themselves as Catholics, only 18.7 percent are practicing Catholics.

In addition, just 10.3 percent of the population are regular church goers, and only half of all weddings are held in churches, while divorce and abortion are legal and a same-sex marriage bill has been passed by parliament and is set to be signed into law.

Coinciding with the pope’s visit, hundreds of young people flocked to distribution points in the capital to hand out free condoms, to protest the Vatican’s refusal to endorse the use of condoms as a method to fight HIV/AIDS.

The campaign began when three young lawyers — Rita Barroso Jorge, Diogo Caldas Figueira and Joana Vieira da Silva — created a small group on the social networking site Facebook on Mar. 20. But it mushroomed until it had the support of nearly 15,000 people.

“By handing out free condoms, we are raising awareness in the fight against AIDS,” one of the campaign’s organisers, Barroso Jorge, told IPS.

The activist said the campaign was “a success beyond our expectations, because we distributed 18,000 condoms in three hours instead of the 16,000 in five hours that we had hoped to hand out.”

The initiative, which has the support of Portugal’s main women’s and gay rights associations, among other civil society groups, will continue Wednesday and Thursday in Fátima and Friday in Porto, the pope’s next stops.

Another of the organisers, Caldas Figueira, pointed out to IPS that in March 2009, the pontiff acknowledged in Africa that AIDS was a global tragedy, “but said the distribution of condoms made the problem worse.

“Our protest was born in response to the pope’s amazing distancing from reality and the extremely serious consequences that his statements can cause in the fight against AIDS,” said Figueira.

Other aspects of the pope’s visit will be smoother. By contrast with what has happened in other countries with large Catholic populations, in Portugal “there are no concrete cases of pedophilia” by the clergy, as the Portuguese bishops’ conference stated.

Bishop Antonio Marto, vice president of the bishops’ conference, said that “no one, to date, has presented concrete complaints about specific cases.”

But Carlos Esperança of the Portuguese Athiests Association (AAP) said the protests against child abuse by priests were against the innumerable cases that had emerged around the world.

Responding to reporters’ questions aboard the papal plane on his way to Portugal, the pope said “Forgiveness cannot substitute justice.”

He also said “The greatest persecution of the church doesn’t come from enemies on the outside but is born from the sins within the church.”

The AAP activist said the pope must be treated with respect and given a reception befitting a head of state. But he added that “this is a pope who is under suspicion of complicity in the cover-up of crimes of pedophilia in the Church.”

Esperança said legal experts in several countries were studying the possibility of suing the pope for complicity.

The government of socialist Prime Minister José Sócrates, meanwhile, has drawn criticism for declaring Thursday a national holiday and for allowing people not to go to work on Friday, which means thousands of people will make use of the opportunity to take a short holiday.

Ricardo Alves, president of the Associação República e Laicidade (ARL – roughly the “secular republic association”), said there is a “silent majority” in Portugal “who don’t care at all about the pope’s visit” and whose absence at work will hurt the economy.

“Their lives will also be affected by the lack of services, mainly in schools and hospitals,” he said.

The pope’s visit has created “a stifling environment,” said Alves, who is opposed to making Friday an unofficial holiday, because workers “will be forced to use one day of their annual vacations to take care of their children since the schools and child-care centres will close.”

In Lisbon, Porto and Fátima, prices have little to do with Christian charity these days: rooms in modest pensions that usually cost between 40 and 80 dollars a night were being booked for 180 to 385 dollars a night May 11-14, while the going price for access to a private balcony offering “a view of the pope” was as high as 250 dollars.

And while street stalls and small shops did brisk business selling t-shirts, ceramic plates, tiles, ashtrays, key-chains and all sorts of souvenirs with Pope John Paul II’s image, there is little enthusiasm over merchandise with the image of Pope Benedict.

“Products with the image of the new pope have been a disappointment,” said Fátima shopkeeper Jaime Alexandre.

Under Pope John Paul, sales ahead of the anniversary of the May 13, 1917 “apparition of Fátima” averaged 32 dollars a day, but now Alexandre has sold just 6.40 dollars in such merchandise, he said.

“Unfortunately, this pope is not as revered as John Paul II,” he lamented.