Connecting the Dots from Detroit to Dakar

DETROIT, Jun 25 2010 (IPS) - Africa’s continued struggle for political and economic independence in many ways mirrors the very own struggles of communities in the U.S. that are now being tabled at the 2010 U.S. Social Forum in Detroit. 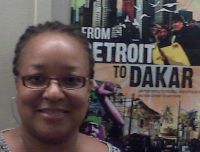 Tanya Dawkins, an Africa advocate, is among many who attended the U.S. Social Forum's Detroit/Dakar project meeting. Credit: Bankole Thompson/IPS

Africa advocates and progressive foreign policy observers were pitching that message Thursday in introducing the “From Detroit to Dakar 2010” project, even as leaders of the powerful G8/G20 nations geared up for their meeting this weekend in Toronto, Canada next door.

The D2D project catalogues a host of issues and organisations working to change U.S. foreign policy toward Africa for the better.

Ahead of the 2011 World Social Forum to be held in the Senegalese capital of Dakar Feb. 7-11, the project is aimed at not only enhancing participation at the ongoing forum but also to promote issues related to Africa and the African Diaspora.

“What do we see as our priorities? This is meant to be a people’s movement assembly,” said Emira Woods, a noted foreign policy analyst on Africa with the Institute for Policy Studies in Washington D.C.

Woods, who is one of the leaders of D2D, challenged activists at the forum to ensure that coming out of Detroit there are clear-cut goals to spotlight the challenges facing Africa and even beyond the Dakar summit next year.

“Part of the dynamism of the social forum is coming together as a family reunion,” Woods said. “Another world is inevitable and the steps that we are taking now will do that.”

Woods reminded her fellow advocates that their children would be impacted by the decisions being made today by political leaders.

The D2D project issued a report with a list of action- oriented recommendations on issues that are most germane to present-day Africa, including Economic Justice, Africom (the U.S. military’s Africa Command), HIV/AIDS, Food and Land Security, Climate Change and Migration.

On economic justice, the report details how Africa’s massive external debt continues to burden the continent’s development and hinder the fight for human rights, health and education.

Under World Trade Organisation (WTO) rules, the report says the U.S. and other Western nations continue to pursue policies that are antithetical to Africa’s interests and perpetuate the extraction of resources from the continent without any benefit to its people.

“The International Monetary Fund (IMF) and the World Bank persist with neo-liberal economic policies prioritising profits over people’s needs. Such measures continue to increase poverty and inequality across the African continent. Consequently close to 80 percent of the population on the continent lives on under two dollars a day,” the report stated.

The global financial crisis threatens to wipe away gains made by African nations in recent decades, and has exposed the myth that deregulation and free market policies serve the masses of the people, the report said.

The Black Alliance for Just Immigration (BAJI) said while debt cancellation for Africa should be at the forefront of the foreign policy debate on Africa, advocates should not forget about communities in the U.S. that have been burdened by debt from huge financial institutions.

“We also have the similar situations here in the U.S. with mortgage loans that were forced on people without them understanding what it means,” a representative from BAJI said, adding that communities of colour hit hardest by the mortgage crisis are now paying a high price.

Concerns about the activities of Africom are also a focus of the Detroit/Dakar project.

“U.S. foreign policy and development aid is increasingly directed by the security agencies and often conducted by private military contractors that are not accountable to congressional and public oversight rather than the appropriate agencies (the Department of State and the Agency for International Development),” the report said.

Briggs Bomba, director of campaigns for Africa Action, said Africans in the diaspora have a unique opportunity to press Washington for a more just and equitable policy toward the continent.

“It is very important that we lift Africa as the place in need of our solidarity,” Bomba said. “The corporate-led globalisation project has shifted to the less developed countries. It is important that those of us who are here play a role in changing the policy.”

He called on the forum to be the “platform for the generation of alternatives” so that activists are not only seen as opposing policies but suggesting real alternatives to current policies.

What they are fighting for now, Bomba said, will help “that poor woman in the village to reclaim a life of dignity”.

On HIV/AIDS in Africa, the report indicated that the U.S. and other wealthy nations control the medications that can keep people living with HIV alive and healthy for decades.

“Yet currently less than one-third of those in need of these drugs in the global south have access to these drugs with the greatest need in Africa. As the leading killer of women in Africa, the question of whether the resources exists to provide AIDS treatment and whether corporations are able to exercise global control over the price of medicines is a human rights, gender rights and economic justice question,” the report stated.

The report called on the administration of President Barack Obama to make good on his campaign promises to increase funding for HIV/AIDS and fight corporate control of over essential medicine to treat the deadly disease. Anything less will allow “global inequity and medical apartheid” to continue, it said.

Akua Budu-Watkins, a Detroit political activist, said efforts must also be stepped up to fight HIV/AIDS in the U.S., where African American women some of the primary victims.

“The Detroit to Dakar effort represents an important opportunity to connect the dots between a flawed economic model and an ideology that has failed to deliver real development in the United States and on the African continent. Unsound and short-sighted trade policies have given rise to distorted patterns of joblessness, migration, rising inequality and devastation of entire communities all over the world,” said Tanya Dawkins, an independent analyst and director of the Global-Local Links Project.

She added, “The organisers of the Detroit to Dakar initiative have created a much needed space and an important opportunity to define and articulate a new narrative for community rights and community reparations on both sides of the Atlantic.”