DETROIT/BEIJING , Jun 20 2010 (IPS) - As thousands of people from around the world prepare to converge in Detroit, where expectations are high for the Jun. 22-26 U.S. Social Forum, activists and auto workers hope the meet will be an opportunity to chart a sustainable future for an industry that provides 1.7 million U.S. jobs. 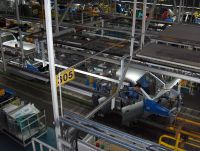 Detroit has been hit harder than nearly any other U.S. city by growing competition from Asia, rising oil prices, and the economic recession that took a heavy toll on the “Big Three” U.S. carmakers – Chrysler, Ford and General Motors.

According to the Centre for Automotive Research (CAR), in 2007, for the first time in history, international firms like Toyota, Honda and Hyundai sold about half of the cars bought in the U.S. By the end of 2009, the U.S. carmakers’ share had fallen further, to an estimated 42 percent.

Many critics of the Big Three say their own design failures and disinterest in fuel efficiency are at least partly to blame – in 2006, for example, Consumer Reports declared that all 10 of the cars that it considered to be the 10 best were built by Japanese companies.

One result has been a hemorrhaging of U.S. auto industry jobs – between 1993 and 2008, the state of Michigan (home to the city of Detroit) lost 83,000 auto manufacturing jobs. By 2008, the entire U.S. car industry was operating at less than 50 percent capacity, according to CAR figures.

“Worldwide, new markets are emerging and the U.S. will remain stagnant, unstable because wealth and income continues to shift from working people to the rich. Oil supplies and prices will remain a wild card too,” Frank Joyce, who served as spokesperson for the United Auto Workers (UAW) union, told IPS.

“The benchmarks on quality, production systems, design and marketing are now quite comparable across the globe,” Joyce said. “Even the gap in labour costs is narrowing as U.S. auto wages are driven down and wages in China and elsewhere are moving up.”

Labour activists say they are looking at the big picture and considering the kinds of policies that fit with the current highly globalised economy, which is vastly different from the industrial economy that once improved living standards for U.S. workers and helped to stabilise families.

Richard Feldman, a UAW member and participant in the upcoming U.S. Social Forum, said the struggles faced by automotive workers in the U.S. are similar to what workers in Asia are going through despite the seeming growth of the Asian automotive market.

“Toyota closed their only union represented facility in the U.S. and we now need to deepen our commitment to organise the Asian and European multinational corporations in the South,” Feldman said. “I don’t think it is about losing to Asia but recognising we need to create new concepts of transportation that respect the limits of planetary resources and where workers and communities are respected and given a voice at the table.”

Indeed, a wave of unrest at foreign-owned factories in China is now showing signs of spreading into the poorer interior regions.

The disputes are a black eye for China’s Communist Party, which has long sought to discourage worker activism and has dealt out harsh punishments to protestors. The unrest has not been reported widely in local media.

Honda Motor Company, for instance, has struggled with several labour disputes at four China factories. A spate of worker suicides has hounded other firms.

There have been 12 suicide attempts since January at two sprawling Foxconn campuses in Shenzhen. The factories, which employ about 400,000, produce products for companies including Apple, Dell and Hewlett-Packard.

In response to the unrest, Beijing has promised higher wages for workers and farmers, even as local officials continue to attract investors with promises of cheap labour. Foxconn raised salaries by 66 percent and Honda by at least 20 percent.

Following the disputes at Honda and Foxconn, strikes were also reported at other foreign run factories far from the wealthier Pearl River Delta region, including the factory of a Taiwanese-owned sports goods supplier in Jiangxi province and at Brother Industries, a Japanese sewing machine maker in Xian. The disputes focus on low pay and high living costs, long hours with little to no rest, and employers trying to rein in costs.

Experts say the unrest is reflective of a new generation of workers who are unable or unwilling to handle the conditions their predecessors faced.

“The majority of migrant workers now are young people born in the late 1980s and early 1990s. They went to school but lacked enough schooling. They want a decent salary and life in cities. If they feel treated unfairly, they will stand up and fight against it,” says Xiao Qingshan, a labour activist based in Guangdong.

Zhou Xiaozhen, a sociology professor at Renmin University in Beijing, says the recent unrest occurred in part because the factories belonged to foreign owned companies, adding that labour protests would have been halted quickly at state- owned enterprises. But he also attributed the disputes to poor working conditions and bad management. He adds that the ban on labour unions makes it difficult for workers to improve their work conditions.

“China’s workers are at a disadvantaged position, and they can’t unite together. Employers can do whatever they want, which makes suicides and labour unrest break out,” Zhou says.

Building alliances among workers around the world is one of the goals of the second U.S. Social Forum, a spin-off of the World Social Forum movement.

Joyce said the week-long gathering in Detroit will help forge a strong democratic response to propel a new wave of social and economic justice and progress, because the automakers need to be “more green, far more oriented toward mass transit and more economically fair to workers”.

Feldman added that while technology and outsourcing has been an issue for the U.S. auto industry – 16 percent of North American vehicle production is currently in Mexico and expected to grow to 20 percent in coming years – the challenge now is to create a local sustainable economy with green transportation.

“Work is a human right,” Feldman said. “A new American dream is being created… to increase our standard of living to create a new quality of life where we live more simply.”