PESHAWAR, Aug 22 2010 (IPS) - Turn schools into hate-free zones, and achieving peace in violence-wracked Pakistan may not be far behind. 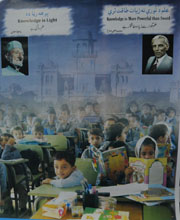 A poster published by the textbook board and pasted in schools in Khyber Pakhtunkhwa, Pakistan. Credit: Ashfaq Yusufzai/IPS

This, says Fazal Rahim Marwat, chairman of the Khyber Pakhtunkhwa Textbook Board, is the thinking behind current efforts to weed out what he calls hate material used in school curricula that helps fan the flames of religious extremism in this South Asian country.

For years, says Marwat, Pakistan’s educational institutions have been unwitting tools in the spread of militancy in this mainly Muslim country.

“Jihadist stuff in school and college curricula has been partly responsible for the growing extremism among the people,” he says. “School curricula, sectarian speeches, and easy access to jihad literature and websites have played an active part in the rise of (religious) fundamentalist movements (in the country).”

‘Jihad’ is an important religious duty among Muslims. While it refers to different forms of struggles in one’s life in order to better oneself, extremists have invoked this ‘holy war’ in justifying the use of violence, including suicide attacks and bombings, against those they judge to be enemies.

Khyber Pakhtunkhwa, formerly known as the North West Frontier Province, acquired a reputation for being a hotbed of extremist views given its proximity to Afghanistan, which was once under the Taliban. In the last decade, this province has also been consistently number one in annual lists of terrorist-related incidents across Pakistan.

In large part, flawed views that are passed as facts in textbooks may help explain why Gul Ghutai, a Grade 6 student at the University Model School here, believes fervently that the Soviets, who invaded next-door Afghanistan in 1979 and left it only in 1989, are infidels and therefore enemies of Islam. So are, she says, Indians, with which Pakistan has fought three wars and has a running dispute over majority- Muslim Kashmir.

“We read in our books that these two countries were out to eliminate Muslims,” says Ghutai. “We should not be friends with these countries.”

Shaheena Afzal, a Grade 10 student at the same school, also says some of her classmates dislike India and Israel due to the lessons in their textbooks. Adds Azfal: “A month back a ninth-grade student did a suicide blast, (and that) may be due to the contents the students read in schools.”

Marwat says that extremist ideas began to thrive in Pakistan’s schools in the 1980s, at the peak of the resistance by ‘mujahideen’ against the Soviet occupation of Afghanistan. But he agrees with other observers that the ‘Islamisation’ of this country’s educational institutions actually started in 1976, during the rule of then dictator General Zia ul-Haq. At the time, an act of parliament imposed a curriculum that portrayed Pakistan as being surrounded by enemies, including India. And because the dominant religion in Pakistan is the foremost difference it has with India, being a non-Muslim was depicted in a less than flattering light.

This thrust in schools was emphasised even more after the Soviet invasion of Afghanistan. Explains Marwat: “Pakistan being a frontline state against (Soviet) forces in Afghanistan, (schools) incorporated hate matter to inculcate the element of jihad among the Pakistani as well as Afghan students.”

The Iranian Revolution of 1979 became another factor contributing to the Islamisation of the Pakistani school curriculum. This also helped propagate the us-against-the world thinking in the country, he says.

It was not until 2007 that moves to reform Pakistan’s textbooks began, with the then administration of Gen. Pervez Musharraf imposing what it called the ‘National Textbook and Learning Material Policy and Plan of Action’.

But the programme proved so controversial that progress has been slow. It was not until recently that the Constitution was amended to allow provinces to make their own curricula, thereby freeing provincial authorities like Marwat from federal red tape.

Since January, the province’s textbook board has been busy revising textbooks for Khyber Pakhtunkhwa’s 40,000 private and public schools. According to Marwat, there will be changes as well to the curricula for grades 1 to 12, to help students become “good human beings who can contribute to national as well as regional and global development”.

“We are replacing the pro-jihad Koranic verses in the curriculum with those verses that call for peace, love, and brotherhood among mankind.” says Marwat.

“Our efforts,” he continues, “are to tell the students that knowledge is more powerful than the sword, knowledge is light, (as well as) the ideologies of local leaders, such as Bacha Khan, who preached the philosophy of non-violence.”

The curriculum revision is expected to be completed by the end of 2010. To be affected by the reforms are books for Grades 1 to 10, although more attention is being paid to those for the primary level. Points out Marwat: “The students can easily learn things at a tender age.”

Tenth-grader Afzal welcomes the impending changes. She comments, “We appreciate if the old courses are replaced with new ones. Our books have hate materials for India while in reality we were the same nation before Partition in 1947.”

But there are voices of caution as well. Says Ayub Khan, a father of three: “Change is good, but it should be within Islamic context. Anything against Islam will flare up protests against the government. The government must avoid deleting Islamic verses from the courses.”