PERU: Transparency a Challenge for Mining and Oil

LIMA, Aug 8 2010 (IPS) - Peru is the only Latin American country that has made steps towards joining the international Extractive Industries Transparency Initiative (EITI), but has a difficult stretch ahead as it tries to overcome industry resistance to reporting profits and the government’s own obstacles. 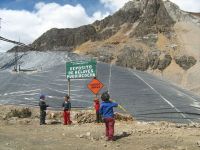 The Peruvian government was to have completed the requirements in March for acceptance as a member of this global effort begun in 2003. But it obtained an extension until September.

EITI president Peter Eigen told Tierramérica that it is the last extension of the deadline for joining the initiative that includes governments, mining and petroleum companies, multilateral agencies and non-governmental organisations.

Eigen said Peru is on the right path, but has to meet all the requisites.

The Peruvian case was considered for membership, he said, because of the participation of civil society, which helped promote the initiative for greater transparency and accounting of tax payments of mining and hydrocarbon industries.

In addition to being an oil country, Peru is among the world leaders in production of gold, silver, copper, zinc and lead.

From 1992 to 2007, the mining and oil companies invested more than 24 billion dollars in Peru. Although poverty was reduced to about 39 percent in 2009, several focal points of severe poverty remain, coinciding with the zones where intense mining or oil drilling takes place.

There are five steps for a candidate country to obtain compliance status: adhesion, preparation, disclosure (of the tax report), dissemination and validation.

Peru had only completed the first two steps in March. When the deadline was extended, the next phase began, and on July 23 the report was presented in Lima.

Only Azerbaijan, Liberia and East Timor have reached compliance status, and another 27 are candidates — 20 from Africa — while Guinea was suspended.

Peru is the sole Latin American candidate. Bolivia, Colombia and Mexico have expressed interest in joining EITI, but have yet to formalise a request, Eigen told Tierramérica.

Peru requested admission in September 2004 and asked for support from the World Bank and the British government’s Department for International Development, both EITI sponsors.

The process is entrusted to a commission led by the Ministry of Energy and Mining and includes other government agencies, and representatives from industry, NGOs and universities.

Thirty-three companies from a pool of 60 big enterprises participated in the accounting conciliation report, according to Energy vice-minister Daniel Cámac. Of that group, 24 mining and nine petroleum companies agreed to provide information on income taxes, royalties and other areas.

“It is a voluntary, public-private alliance. The challenge is how to do this so that more actors participate and better studies are done,” said the ministry’s director of social management, José Luis Carbajal.

The EITI representatives indicated that it would have been “desirable” to include figures through 2008.

Civil society representatives told Tierramérica that one of the main obstacles is a group of companies reluctant to reveal their individual tax payments and which proposed instead to turn in their information as a bloc.

Of the 24 mining companies that reported, six decided against providing detailed figures. The business manager of Technical Services of Southern Peru, Carlos Aranda, stated on their behalf concerns about “security.”

In the opinion of Carlos Wendorff, of Peru’s Pontifical Catholic University, it is nothing more than “foolishness.” He wondered, “What is going to happen to the companies if they tell the truth about their numbers? What there needs to be is total transparency.”

Another obstacle emerged from the National Superintendency of Tax Administration, which has resisted providing the figures related to taxes collected because they are subject to confidentiality regulations.

According to Wendorff, there were additional stumbling blocks from the government that the Ministry of Energy was not able to overcome on time for the deadline.

A pilot conciliation report was conducted in the northern region of Cajamarca on the taxes paid by mining and oil companies, especially Yanacocha, which is mining South America’s largest gold deposit. In the surrounding area, 56 percent of the residents live in poverty.

Peru turned in the report to the French firm CAC 75, accredited by EITI for the validation, and hired by the Peruvian government for half a million dollars.

The auditing firm is expected to issue a report in mid-August. Then the government can issue final observations. “We are confident that we can complete everything in September,” vice-minister Cámac told Tierramérica.