NAIROBI, Sep 14 2010 (IPS) - Campaigners for increased health financing welcome the commitment by African Union member states to direct more resources to health. But the needs of the continent seem to dwarf available budgets. 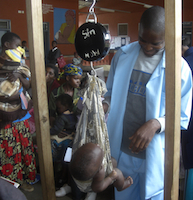 About 4.5 million children under five die each year due to malnutrition, diarrhoea, pneumonia, malaria and HIV.

During the 15th Summit of the African Union heads of state in Kampala in July, African leaders committed to mobilise more resources for the health sector in addition to the allocation of 15 percent of national budgets.

Dr Thomas Kibua says even if every African states were to increase allocation to the health sector to 15 percent, none of the three health-related millennium development goals will be achieved.

“States would have to increase allocation to health care to 45 percent if they are to achieve MDGs by 2015. This is untenable because that is almost the entire national budget going towards health,” he says.

Rotimi Sankore of the African Public Health Alliance says training of a health workforce is important, yet most countries do not think about it.

"To increase the health of a country it takes training. There is no other way around. No other MDGs will be met without training," he says.

Presently most African countries have only between 10 to 40 percent of the doctors, nurses, midwives and other health workforce required to provide quality health care at primary level.

"There are less than 100 doctors in Sierra Leone and most are in Freetown. Once outside of Freetown, you are on your own. If you have a baby, you only have a prayer," Sankore says.

Twenty to 30 million people in Nigeria and Ethiopia are at least 80 kilometres from the nearest clinic. Sankore says governments need to ensure there is at least one well staffed and equipped primary health clinic per community.

Egypt and Ethiopia are concentrating on producing increased number of health workers and it has started making a difference.

Egypt has a quarter million midwives, they produce the same number as the U.S. This is reducing maternal deaths as pregnant women have access to skilled birth attendants.


According to the African Public Health Alliance (APHA) and 15 Percent Campaign, African countries will have to go beyond the previously-agreed percentage to health to meet international guidelines.

“Countries will have to increase their health spending per person to reach the World Health Organization-recommended $40,” says Rotimi Sankore of APHA, a non-profit organisation promoting health development and financing across Africa.

And even this may not be enough: the WHO’s recommendation assumes basic levels of nutrition, and access to clean water and sanitation. “For this to be worthwhile, governments will have to make separate investments in other sectors within the economy such as human resource and infrastructure,” says Sankore.

The gulf between that level of investment and the status quo is daunting. More than half of Africa’s 53 governments invest $14 or less per capita, with some investing as little as $1 to $4 per capita on health. “Such miniscule amounts can hardly balance gaps,” says Sankore.

Building from a low baseline

Poor health in Africa has been perpetuated by a lack of health workers and poor distribution of those who are available.

Seventy percent of women in Sub Saharan Africa have no contact with health workers during childbirth. This is a major contributing factor to high maternal mortality rates.

In countries such as Chad, Madagascar, Burkina Faso, Nigeria, Cameroon and Mali, fewer than five percent of women have access to skilled care during birth.

Fifty percent of people in Africa do not have access to essential drugs.

Several countries are trying to provide free or very low cost maternal and childcare, while others are training additional workers for remote areas.

Malawi has trained health surveillance assistants to deliver services to the community.

Mozambique is upgrading skills of existing health workers to address chronic shortages of trained staff. Nurses and outreach workers can now provide medications and surgeon assistants can perform caesarian sections where no obstetrician is available.

With only a fraction of African states meeting even the 15 percent target for spending on health, finding extra resources to train health workers will be an uphill task.

As additional health workers become available, many more health centres will be needed for them to work in.

Without coordinating efforts by the health, education, labour and human resources sectors, the removal of user fees for pregnant women and children will only mean more people will turn up to access non-existent services.

To improve access to essential drugs, countries will have to improve their capacity for production of drugs – including storage and efficient distribution channels.

This will require investment in training of skilled scientists, technicians and engineers. This will also require improved manufacturing and industrial investment and necessary negotiations and laws for trade and related aspects of intellectual property rights, argues APHA.

To make the most of limited funding, governments will have to ensure gender equity and also include adolescent and youth health facilities. Sankore says if countries break down the population and prioritise women of childbearing age, they can prevent HIV transmission.

“If you apply a gender lens, you can deal with problems that cost hundreds of millions each year,” Sankore says. Focusing on preventing mother-to-child transmission of HIV, for example, will reduce the number of children born with HIV and thus reduce treatment costs.

While donor funding makes up a large part of spending on Africa’s public health, Sankore says over time this should be reduced.

“In some countries 50 percent or above of their budgets is from foreign aid. This is just not sustainable,” he says.

He asserts that the focus should be on ensuring that countries can survive beyond the timelines set for donor funds. Once the aid is stopped, countries should have policies in place that will ensure programmes can be sustained by domestic resources.

*Chris Stein in Johannesburg contributed to this report.