CANCÚN, México, Dec 8 2010 (IPS) - The short-cuts that the United Nations system is offering companies to profit from strategies against global warming were the target of loud protests on the Day of Action for Climate Justice. 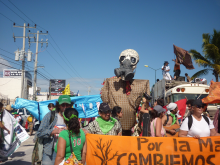 Two separate demonstrations, of thousands of people each, were held Tuesday as the climate change summit that ends Friday in the southeastern Mexican resort town of Cancún enters the final stretch.

One of the protesters’ slogans, “País petrolero, el pueblo sin dinero” (In this oil-producing country, people have no money), referring to Mexico, underscored the main cause of the heating up of the planet: the burning of fossil fuels, a question that has been practically sidelined in the talks at the 16th Conference of Parties to the United Nations Framework Convention on Climate Change (COP16).

The day began with a march through the centre of the city by rural and anti-globalisation movements from Mexico and other countries of Latin America, meeting in the Diálogo Climático-Espacio Mexicano (Mexican Space for Climate Dialogue). Accompanied by activists from Oxfam and the Hemispheric Social Alliance, they marched down López Portillo avenue to city hall.

Profit-generating policies and programmes, like selling surplus rights to emit carbon dioxide into the atmosphere as part of the so-called carbon market, could be expanded in Cancún.

There is a “near agreement” to include carbon capture and storage under the Kyoto Protocol’s Clean Development Mechanism, and the Reducing Emissions from Deforestation and Forest Degradation (REDD) programme, under discussion in the COP16, could include market incentives.

In both marches, labour and indigenous organisations outnumbered and out-mobilised the environmentalists. And their demands and slogans were also broad: ranging from food sovereignty and human rights to protests against the government of conservative Mexican President Felipe Calderón.

“Let’s be tough on that gang that has gathered in Cancún to enslave humanity and ruin the planet,” shouted one Mexican demonstrator with his face partially covered by a mask bearing the logo of the Nestle food corporation.

Less radical, Oxfam activists wore T-shirts reading “Cancún can” on the front and “From small seeds in Cancún, big things can grow” on the back.

What is it that Cancún can do? “We think the conference in Cancun can deliver not just confidence and trust between governments but also between citizens,” Antonio Hill, senior climate change policy adviser at Oxfam in Latin America and the Caribbean, told TerraViva in the march.

“After the disappointment of (the late 2009 COP15 in) Copenhagen we need more than just these talks: we need results that deliver concrete benefits, especially for the communities that are the most vulnerable around the world and those that are already suffering” from climate disasters, Hill said.

The governments “delayed the process in Copenhagen, but they certainly didn’t delay climate change. This year we saw 20 million affected by floods in Pakistan, since August one to two million people in Colombia are living with water just above their waist, and just yesterday (Monday) 120 people died in landslides and the stories are the same” all over the world, he added.

“Cancún can deliver…a fund that can prioritise adaptation and where at least half of the money goes to dealing with climate change impacts that already inevitable,” Hill said.

But some organisations warn that such a fund could also be co-opted by the financial and private sectors.

“I think what is clear is that the richest countries are trying to find ways to escape obligations they have to deliver public funds,” Hill added.

What really stands out, Colombian activist Enrique Daza, secretary of the Hemispheric Social Alliance, told TerraViva, was “the generosity and alacrity to make hundreds of billions of dollars available to bail out the financial systems” compared to the “stinginess” when it comes to making funds available for combating climate change.

“They are fighting for every dollar here,” he said, referring to the negotiations over funds for adaptation to climate change.

“Little can be expected from international conferences on any issue…the paralysis of the multilateral system” is obvious, Daza said.

So how can change happen? “Not like this. Strong social pressure is needed” and “it is our responsibility, as social movements,” to mobilise people, he said.

“There’s no justice in these talks,” said a young activist with the Philippines Movement for Climate Justice who identified herself simply as Virgi.

The United States is trying to impose itself “in many issues,” such as “the imposition that the World Bank should manage climate change funds. Certainly we don’t want the World Bank to be in charge because it has in the past financed dirty energy projects that have had effects on the climate and added to emissions,” she told TerraViva.

With songs and Bolivian instruments and improvised reggae beats, the bigger demonstration led by the Via Campesina international small farmers movement marched along Tulum avenue towards the outskirts of the city, with the aim of reaching the Moon Palace, the hotel complex that is serving as the venue for the COP16 talks.

But dozens of police decked out in full riot gear blocked the road in front of metal barricades, while a helicopter buzzed overhead.

Peasant farmers and indigenous people from Latin America and the United States, Mexican human rights groups and radical leftist movements, and representatives of organisations like Friends of the Earth marched under the midday sun, chanting slogans like “Time is running out and nothing is being done here”.

The words of European Commissioner for Climate Action Connie Hedegaard sounded like a response at the start of the high- level segment of COP16.

“Over the last years we have managed to mobilise the whole world and get people from around the planet to acknowledge the urgency of this challenge. Seeing the pictures of palm trees and beautiful beaches, how would they judge us — the governments of the world — if we left Cancun empty-handed?”

*With additional reporting by Rosebell Kagumire.

** This story appears in the IPS TerraViva online published for the U.N. Conference on Climate Change in Cancún.