SAN DIEGO, California, Dec 7 2010 (IPS) - Argentina, Chile, Costa Rica, Uruguay and even Brazil are close to being able to provide a universal basic income to all citizens, which is the way to make cash transfers an effective tool in fighting inequality, according to Martín Hopenhayn. 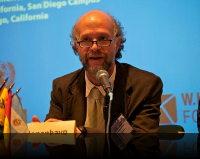 “The premise is that citizens, as such, are entitled to a minimum level of subsistence,” said Hopenhayn, the director of the Social Development Division of the Economic Commission for Latin America and the Caribbean (ECLAC).

But in order to sustain such payments, in-depth reforms of tax systems in the region are needed, Hopenhayn told IPS in an interview during a late November seminar organised by ECLAC in San Diego, California to disseminate and highlight the results of its five-year Experiences in Social Innovation contest.

The conditions that would make it possible to provide a basic income to citizens appear to be coming together in some countries of the region, as poverty has declined in nearly all countries despite the international economic crisis that is still plaguing much of the world economy, according to the Social Panorama of Latin America 2010 report released by ECLAC in November.

Q: How would you evaluate the social situation in the region after a five-year boom, which was interrupted by the global crisis of 2008? A: Compared to the 1980s and 1990s, social indicators have clearly improved. Since 2002, the poverty rate has fallen from 44 percent of the population in the region to 32 percent. The creation of jobs and increase in family incomes, by means of wages or social programmes, has broken with decades of stagnation or decline.

Although it seems incredible in view of the tremendous crisis we have suffered, there has also been a general decline in poverty and indigence, albeit small, in 2009 and this year. Unlike in the past, governments have adopted countercyclical measures in the face of the crisis: they have spent money to protect the jobs and incomes of the poorest households.

The other positive aspect in this time of change is that for the first time in many years, there has been an improvement in the distribution of wealth, although Latin America is still the world’s most unequal region. But the GINI index (which measures inequality) has improved in nearly every country, especially Brazil and Venezuela.

Q: Why has inequality been the hardest nut to crack, despite the election of leftist governments that specifically include the fight against inequality in their government programmes? A: The biggest problem is that it is very difficult to reduce wage gaps, partly because of the weight of the informal sector of the economy where, despite advances made, half of the urban population still works.

Furthermore, much of the productive apparatus is still backwards, lacking access to markets and with a low level of specialisation.

Q: Growth is also based on raw materials, which do not generate much employment… A: That presents a major dilemma. The significant rise in the international prices of farm exports and natural resources has been a big ally in the growth of many countries, such as Argentina, Brazil, Chile and Uruguay, but the problem is that these are areas of the economy that generate few jobs and tend to concentrate wealth.

The big challenge for the region is to diversify the production of wealth.

Q: In addition, the rise in farm prices leads to a similar effect in the domestic market. A: That is a big problem. In the period we’re talking about, extreme poverty would have been reduced even more if not for the inflation in food prices, because the extreme poor spend nearly all their income on food.

There are exceptional cases, like Argentina, where the government took measures to keep domestic prices from being pulled up by international prices for what is a basic part of the diet in that country, beef.

Q: But that policy (a ban on beef exports, and later export quotas) drew a great deal of criticism both within and outside of Argentina. A: It is a dilemma. But I must say that Argentina did not suffer much of a negative impact on its exports as a result of that measure, which did on the other hand improve things on the domestic market.

A: What does ECLAC recommend governments do to combat inequality, now that a new boom period is predicted?

Q: The first recommendation is what we call the fiscal pact. Latin America has an average tax burden of around 17 percent of GDP, which is very low. In Mexico, for example, it is only 12 percent. Worse yet, the structure of the taxes — which, unlike in Europe, are indirect — is very unfair, because everyone pays the same, rich and poor. They are taxes on consumption. Meanwhile, income taxes and taxes on business profits are very low, and there are many exemptions as well.

So a reform of the tax system is essential. The combination of economic growth and a heavier, more redistributive tax burden translates into an increase in resources for social policies. To make serious cash transfers, for social purposes.

Q: You’re talking about an increase in social spending? A: Currently transfers to the poor, through plans like Brazil’s Bolsa Familia (family grant) system or Mexico’s Oportunidades, amount to just 0.5 or 0.6 percent of GDP. That is still very low, although efforts have been made.

What would happen if we could transfer resources to all families with some degree of social vulnerability, in order to push them above the poverty line? That would make healthy child development possible and would improve educational performance and reduce malnutrition.

In other words, it would put countries on a path towards breaking down the intergenerational reproduction of poverty, exclusion and inequality.

Q: The alternative would be a basic income for families without the conditions required today (such as school attendance, vaccination and regular health checkups)? A: There is major debate in the region with respect to whether or not we will make the shift from conditional cash transfer programmes to a citizen income. So far the programmes have set conditions, and the transfers have involved very small amounts.

There is a certain logic to setting conditions. You kill two birds with one stone: the families have more income and, in exchange, the children stay in school. However, the example of Brazil once again shows us that while the Bolsa Familia programme has boosted incomes, it has not had much of an impact on school enrolment and attendance, since primary school coverage is already nearly universal.

We have to see which economies in this region are in a position to move towards a guaranteed basic income. The premise is that citizens, as such, are entitled to a minimum level of subsistence.

Q: Which countries would be in a position to do so? A: At least four variables have to come together: per capita income based on a country’s productive capacity, the tax burden, social security coverage, and the average educational level. In that regard, the countries that would appear to be closest are Chile, Argentina, Uruguay and Costa Rica, although Brazil is not far off.