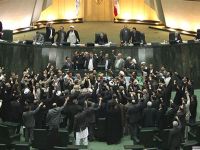 Karroubi’s own web site reports that percussion grenades were also detonated inside the house.

Meanwhile, Iran’s other primary opposition leader, Mir Hossein Mousavi, has been cut off from the outside world under house arrest for at least the past two weeks, indications that the struggle between the Iranian government and its opponents is reaching new heights as popular uprisings sweep the region.

However, even putting their leaders under house arrest did not keep thousands of Iranian opposition supporters from turning out in city streets lined with police officers for two surprise gatherings on Feb. 14 and 20.

Two years ago, protesters were demanding nullification of the presidential election that returned Mahmoud Ahmadinejad to power. Today, their ire is largely aimed at Iran’s Supreme Leader, Ali Khamenei. They chant that “After Mubarak in Egypt and Bin Ali in Tunisia, it is now Seyed Ali’s (Khamenei) turn.”

An informed source and former Iranian government official told IPS that right after the Feb. 14 protests, Heydar Moslehi, Iran’s intelligence minister, attended a meeting with the supreme leader in which he asked for permission to arrest Karroubi and Mousavi. At the meeting, however, Khamenei criticised the Ministry of Information for its reports, asking why its analysis of popular participation in the gatherings had been so wrong.

“It appears that the reports he has received have contradicted the intensity of the protests. Therefore, though several extremist members of the Parliament have demanded execution of the opposition leaders, official authorities’ rhetoric only attempts to express support for the regime, and no further demands for their arrests or execution seem to be uttered publicly,” the source said.

“The doors to their homes must be shut. Their comings and goings must become limited. They must no longer be able to send and receive messages. Their telephones and Internet must be cut off and they must become prisoners inside their homes,” he said.

Thus far, Iranian authorities have stopped short of arresting Mousavi and Karroubi, afraid that such action would only galvanise the opposition further.

Officials in Tehran usually call the protesters “rioters” and state their numbers as “a few hundred”. Some sources reported that during Monday’s gatherings, they observed many boys who appeared 15 to 16 years old among the police lining major squares, clad in bullet-proof vests and holding clubs in their hands.

A student activist who was present at the last week’s protests told IPS that people are a lot angrier than before. “During last year’s gatherings, no matter how much the plainclothes, Basiji, and police forces beat up the people, they wouldn’t reciprocate. But during the recent two protests, people are determined to react in kind whenever the police engage in violence and beatings,” he said.

Opposition leaders and political groups generally encourage their supporters and protesters to refrain from acts of violence. But many now argue that reciprocal actions are self-defence.

Though Iran’s Interior Ministry routinely denies assembly permits for the protesters, over the past week dozens of pro-government forces have been gathering in front of Karroubi’s home and heckling and verbally abusing him.

While the head of the judiciary announced last week that arresting the opposition leaders is not in the best interests of the regime, it appears that Iran’s radical security forces are striving to incite the pro-government forces toward serious confrontation.

“[Even though it looked like] there was a military coup in progress, compared to before, it seemed like people were more motivated to show up. The cars honked their horns non- stop in order to show their support of the protesters. At night, people chant Allah-o-Akbar in the dark to express their protest; this used to be the symbol of people’s protests against the shah,” one young eyewitness to the protests told IPS.

“Returning home from the university, I saw hundreds of police officers inside the squares and intersections between Enghelab Square and Shahrak-e Gharb, who were armed with Kalashnikov rifles. Vehicles carrying Special Guards were going from one side of the city to another. People were very excited, but they were constantly fearful that the police might start shooting randomly and kill someone,” said another student activist who was present during Monday’s protests.

During the Feb. 14 demonstrations, Sane Jaleh and Mohammad Mokhtari, two young protesters, were killed and according to reports, hundreds of people were arrested. Some news sources report that one person was killed during the protests in Shiraz.

“According to the Constitution of the Islamic Republic of Iran, so long as they do not include carrying arms or contradict Islamic principles, demonstrations are allowed and do not require permits from any authorities or organisations,” Shirin Ebadi, the 2003 Nobel Peace Laureate and a prominent Iranian human rights lawyer, told IPS.

Meanwhile, the government seems to be using ever more brutal and sophisticated methods to keep its opponents at home.

One of the demonstrators said that he observed that many of the people who attended the Feb. 14 protests suffered symptoms such as vomiting blood and severe pain in their hands and legs to the point of becoming unable to move.

The source said a physician who treated the ill believed that substances were added to the tear gas used against the protesters in order to distort the balance of potassium and magnesium in their blood, and this could have harmful long- term effects.