Stories written by Omid Memarian
Omid Memarian is well known for his news analysis and regular columns in English and Persian. Omid has been regularly writing for IPS since 2006. He is also a regular contributor to the Daily Beast and BBC Persian and regularly blogs for the Huffington Post. He has had op-ed pieces published in The New York Times, the Wall Street Journal, San Francisco Chronicle, Los Angeles Times, Institute for War and Piece Reporting and Opendemocracy.org. In 2005, he received Human Rights Watch’s highest honour, the Human Rights Defender Award, for his courageous work. Omid Memarian received his master’s degree from the University of California, Berkeley's Graduate School of Journalism in 2009 as a Rotary World Peace Fellow. He was awarded the Golden Pen Award at the National Press Festival in Iran in 2002. | Web 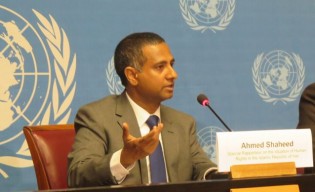 By Omid Memarian
More than seven weeks after the secretive arrest of prominent Iranian diplomat Bagher Asadi, an Iranian official confirmed his detention Thursday, although he declined to provide further details.

By Omid Memarian
A United Nations envoy has called on the Iranian government to release all political prisoners and prisoners of conscience, and to conduct an extensive, impartial and independent investigation into the violence that followed the 2009 presidential election.

By Omid Memarian
Less than two months before Iran's parliamentary elections, as much of the opposition mounts a boycott of the polls, a wave of arrests and lengthy prison sentences for political activists and journalists appears to herald a renewed crackdown in the Iranian capital.

By Omid Memarian
The U.N. special rapporteur for human rights in Iran defended his new critical report on the country Thursday after it was attacked by Iranian officials, who continue to insist he will not be allowed to visit the country.

By Omid Memarian
Iranian President Mahmoud Ahmadinejad's address to the United Nations Thursday followed the script of his previous six visits to New York, with strong criticism of the United States, messianic language, and vague utopian statements on how to govern the world, Iranian-style.

By Omid Memarian
Just 24 hours after Iranian President Mahmoud Ahmadinejad declared that two U.S. hikers who have been detained for nearly two years would be released on bail, the country's judiciary insisted that the decision remains under review.

By Omid Memarian
Last week's appointment of a ranking member of Iran's influential Revolutionary Guard Corps (IRGC) as the country's new oil minister could lead to a more unaccountable and unpredictable military with greater influence on the government in Tehran, analysts say.

By Omid Memarian
Millions of Iranians who have lived under an intense level of internet filtering and advanced monitoring systems for years may soon benefit from new technology that sidesteps the censors.

By Omid Memarian
Forty-nine United Nations member-states have co-sponsored a resolution asking for a special mechanism to monitor Iran's human rights situation, which is expected to be voted later this week at the UN Human Rights Council (HRC).

By Omid Memarian
On Monday night, Iranian security agents raided the home of opposition leader Mehdi Karroubi, separating him from his wife, searching his house and arresting his son, Ali Karroubi, according to the local media outlet Saham News.

Q&A: A Portrait of Iran’s Shah, in Shades of Grey

By Omid Memarian
In "The Shah", a prominent Iranian author and scholar at Stanford University in the United States offers new insights into Iran's modern history, including the 1953 coup, the revolution a quarter century later, and the current repressive political situation.

By Omid Memarian
While Iran gears up for a second round of nuclear talks with Western countries next month, President Mahmoud Ahmadinejad's abrupt dismissal of his foreign minister on Monday indicates a new power struggle with moderate conservatives that could alter the tone and face of Iran's foreign policy machinery in the years to come.

Q&A: “There Is No War on Terrorism”

By Omid Memarian
"The U.S. intentionally confuses al Qaeda with other groups around the world fighting for their independence or liberation, but it's [just] a convenient way to whip up support and get people very afraid," says author and journalist and Reese Erlich.

By Omid Memarian
A week after Iranian President Mahmoud Ahmadinejad told heads of state gathered for the U.N. General Assembly in New York that his government does not jail its citizens for expressing their opinions, Iran's Revolutionary Court sentenced Hossein Derakhshan, an internationally known Iranian-Canadian blogger, to 19 and a half years in prison.

Activists Warn of Rights Crisis Ahead of Ahmadinejad Visit

By Omid Memarian
Speaking at a press conference in New York Friday, Shirin Ebadi, a highly-regarded Iranian attorney and the 2003 Nobel Peace Prize laureate, warned that the human rights situation in Iran is deteriorating, particularly for the many journalists and civil society activists considered political prisoners.

By Omid Memarian
Responding to pro-government critics, Iran's defiant opposition leader Mir Hossein Mousavi has said several times in recent months that he would reveal "untold secrets" from his tenure.

By Omid Memarian
A recent poll conducted by a credible Iranian university centre concerning the post-election events of 2009 has found that 56 percent of participants believe President Mahmoud Ahmadinejad's popularity has declined over the past year, while just 22 percent believe it has increased.
Next Page »
ADVERTISEMENT ADVERTISEMENT