NEW YORK, May 2 2013 (IPS) - More than seven weeks after the secretive arrest of prominent Iranian diplomat Bagher Asadi, an Iranian official confirmed his detention Thursday, although he declined to provide further details. 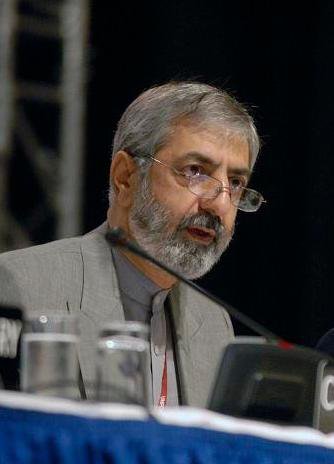 “So far as I know, this individual (in custody) is an experienced foreign ministry diplomat and his latest assignment has been deputy for the D8 group secretary-general,” former foreign minister Manouchehr Mottaki told the Iranian Student News Agency (ISNA). “But I am not informed about the details of the situation.”

The D8, of which Asadi was director of the secretariat, is a group of developing nations with large Muslim populations that have formed an economic development alliance. It includes Bangladesh, Egypt, Indonesia, Iran, Malaysia, Nigeria, Pakistan and Turkey.

A source close to the family told IPS that since his arrest, Asadi’s family has been under pressure from security forces not to discuss the matter publicly.

“They are worried that talking to the media will not help his situation in detention,” the source said on the condition of anonymity.

Another source close to the family told IPS, “We are in shock how the Iranian authorities can arrest somebody without even announcing it when he was at home.”

The source said that during the arrest, which occurred on Mar. 12, Asadi’s house was searched and his laptop and other personal items were confiscated.

“The authorities promised the family to release him after a few days, but he is still in prison. A few days after the arrest, Bagher called home and said he is okay. But since then there has been no news about his condition and the reason behind the arrest.

“We are concerned that he is under pressure and they want to break him,” the source added.

There appears to be official confusion as to Asadi’s status. Ahmad Bakhshayesh, a member of the Iranian Parliament’s National Security Commission, told Bahar newspaper Thursday, “Ordinarily, the arrest of a diplomat is a result of a violation he may have committed in the country in which he is stationed, or it could be political, for example about the subject of reformists.”

Speculating about the case, which he claimed no personal knowledge of, Bakhshayesh added, “I think this news must be wrong, and Reuters did wrong in publishing such news.”

This last was a reference to a Reuters article published Tuesday which first broke the news that Asadi had been arrested, although the reporter was unable to independently confirm the claim by anonymous sources.

Mohammad Reza Heydari, a former Iranian diplomat who joined the opposition following the violent post-election crackdown on street protesters in 2009 by the Iranian police and intelligence, told IPS that sources inside the foreign ministry told him that Asadi has criticised President Mahmoud Ahmadinejad’s policies in private meetings, and he may have been arrested after news of these talks were reported and leaked.

“Considering his way of thinking and his criticism, I believe they are building a case against him. Fabricating cases against individuals is a common practice of the Islamic Republic regime,” said Heydari.

“The Iranian regime has taken the Iranian people as hostages these days. He talked about the people’s rights and current affairs, and this was reported to Tehran by people he was socialising with, and this led to his passport confiscation and detention upon return to Tehran,” he said.

Among his foreign ministry colleagues, Asadi is known as one of the most professional Iranian diplomats. In a prescient January 2004 op-ed published by the New York Times, Asadi warned against the conservative group that could follow President Mohammad Khatami’s reformist cabinet.

“The conservatives’ blatant disdain for human rights and republican aspects of governance, among other things, would inevitably invite outside censure and further complicate an already tenuous relationship,” he wrote.

The Iranian mission at the U.N. did not return repeated calls by IPS for verification of the news or additional details about the arrest.

Although there has been speculation that the arrest is connected to upcoming national elections in June, Heydari believes it’s simply business as usual.

“This arrest is a part of the treatment the Islamic Republic gives its diplomats who speak their minds in the countries where they are stationed, aiming to give a lesson to the diplomats that if they express any opinions other than the ruling system’s, they will be severely dealt with,” he said.

Asadi’s arrest took place amidst other political arrests of reformists or critical activists over the past few weeks, as the Jun. 14 elections approach.

High-ranking officials have warned against the candidacies of former Iranian presidents Mohammad Khatami and Ali Akbar Hashemi Rafsanjani, accusing them of involvement in the 2009 post-election events.

According to Heydari, the Foreign Ministry Inspection Office routinely tells Iranian diplomats prior to dispatching them on their missions that they must refrain from expressing opinions in the presence of individuals who could be potential state enemies, as those expressed opinions could be used against the state later.

“There should be freedom for people to talk. After all, in different meetings, people express their opinions. Monitoring the individuals everywhere and questioning them later are not sustainable methods,” he said.