NEW YORK, Aug 8 2011 (IPS) - Last week’s appointment of a ranking member of Iran’s influential Revolutionary Guard Corps (IRGC) as the country’s new oil minister could lead to a more unaccountable and unpredictable military with greater influence on the government in Tehran, analysts say. 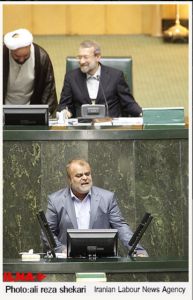 Rostam Ghassemi speaks to parliament prior to the Aug. 3 confidence vote. Credit: Courtesy of ILNA

The IRGC currently controls Iran’s most powerful intelligence- security arm, which played a key role in the post-election crackdown of 2008 and the intimidation, arrests and imprisonment of hundreds of political dissidents.

It has built up a sprawling business empire since the 1979 Revolution, with annual revenues estimated at some 12 billion dollars and investments in sectors ranging from oil, gas and petrochemicals to cars, bridges and roads. It also controls the paramilitary Basij militia.

Organisations affiliated with the IRGC hold key roles in the ballistic and nuclear industries, and design and carry out military and civilian operations outside of the country.

The pressure on parliament to approve the posting appeared to be immense. At the Aug. 3 confidence vote, which ended 216-22 with seven abstentions, Rostam Ghassemi’s appointment was vocally opposed by only a single conservative member, Ali Mottahari.

“Appointing a military commander as the oil minister would cause a union of political power and economic power and this could lead to corruption,” he cautioned.

Mottahari recalled the period 1989 to 1997, under Ali Akbar Hashemi Rafsanjani’s presidency, when Iran’s intelligence ministry was allowed to engage in economic activities. During that period it became clear that the ministry’s operatives were directly involved in the murders of dissident Iranian intellectuals and writers.

Mottahari added that parliamentary oversight of the oil ministry would become much harder with an IRGC commander at the helm, and said that asking questions of the minister or putting him up for a vote of confidence would be difficult.

A journalist present at the parliamentary vote called it “a complete show”.

“During the vote, Speaker Ali Larijani told the MP’s ‘to vote for Mr. Minister.’ This meant that everyone had to vote for him,” she told IPS.

A U.S. State Department official told IPS in an email that, “Iran is tarnishing OPEC’s prestige by naming a minister linked to both [nuclear] proliferation activities and human rights abuses as the head of Iran’s oil ministry, when Iran holds the OPEC [Organisation of the Petroleum-Exporting Countries] presidency.

“IRGC General Rostam Qasemi has been sanctioned by the U.S. and EU for his nuclear proliferation activities as head of Khatam-ol-Anbia, the construction and business arm of the IRGC and currently the largest contractor of government projects in Iran. His appointment shows the expanding influence of the IRGC in Iran’s economy,” the official said.

Washington most recently sanctioned the IRGC on Jun. 8 for human rights abuses against the Iranian people.

In assuming his new post, Ghassemi will resign as head of the IRGC’s Khatam-ol-Anbia Construction Base, considered the most important financial unit of the Guards and currently the largest contractor of government projects in Iran, a position he has held since 2007. The base was established in 1990 with the agreement of Iran’s supreme leader, Ayatollah Ali Khamenei.

Over the past four years, the entity has been the contractor for 1,500 of the country’s most important government projects.

Power struggles at the top

In May, President Mahmoud Ahmadinejad dismissed Oil Minister Massoud Mirkazemi, also an IRGC commander. According to a source familiar with the oil ministry and the IRGC, the reason for Mirkazemi’s dismissal was that he had divulged expenditure reports to the supreme leader.

“Mirkazemi considered himself above Ahmadinejad and had very close relations with Ali Khamenei and his allies, and in some cases, he provided his reports directly to Iran’s supreme leader, and Ahmadinejad found this very hard to tolerate,” the source told IPS in a telephone interview.

“But Mirkazemi’s dismissal created a lot of anger among the high- ranking IRGC commanders,” he added.

Shortly after, Ahmadinejad tried to appoint a member of his inner circle, Mohammad Ali Abadi, as the interim oil minister, but was unsuccessful in gaining the support of top officials and the parliament.

Ghassemi was reportedly not Ahmadinejad’s favourite candidate for the post. However, by choosing an IRGC commander who is less influential within the leadership, the president could improve his fractious relationship with the parliament and the IRGC, while also having an oil minister he is better able to control.

Hossein Bastani, a political analyst with BBC Persian Service who was secretary-general of the Iranian Journalists’ Association during Mohammad Khatami’s reformist presidency, believes that “in reality, the head of the Khatam-ol-Anbia Base is no less powerful than the oil minister, maybe more.”

“Of course the billions of dollars spent on IRGC’s economic projects are all spent through the Khatam-ol-Anbia Base,” he noted.

A political analyst in Tehran, speaking on condition of anonymity, told IPS, “The general policies of the oil ministry, including certain expenditures that are never reflected in official reports, such as Iran’s nuclear programme, are determined by Iran’s supreme leader.”

“All individuals appointed to the position of oil minister are those who are completely trusted by the Iranian leadership. Many of the Islamic Republic’s international under-the-radar activities are funded by Iran’s oil ministry. Even if the oil minister is not involved in such projects, he would know about their financial transactions,” he added.