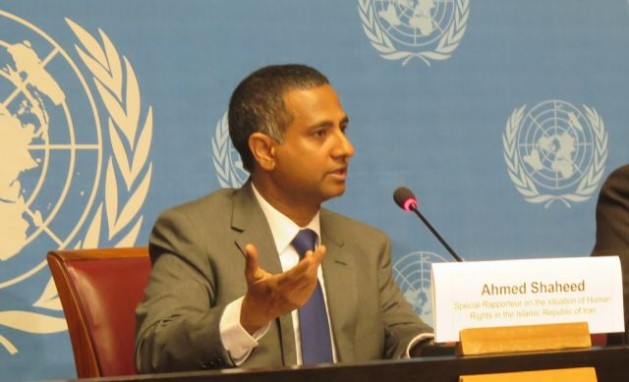 GENEVA, Mar 14 2014 (IPS) - Following the release Friday of his report to the Human Rights Council on the situation in Iran, U.N. Special Rapporteur Ahmed Shaheed urged Tehran to engage with U.N. mandates – firstly by permitting him to enter the country.

“Nobody has been able to go to Iran as a U.N. mandate-holder for nine years now,” Shaheed told IPS in Geneva, Switzerland, where the council is based.

"Personal attacks are nothing new...just think what Iranian citizens in Tehran or elsewhere might get if they speak out.” -- Ahmed Shaheed

“The next step would be Iran engaging with my mandate or if they wish with the other mandates as well,” said Shaheed, who was appointed to his post in June 2011 and has issued two earlier reports.

The 104-page report is based primarily on interviews with 72 Iranians living in three European countries in December 2013 and 61 statements by Iranians inside Iran and Turkey between September and December 2013.

While welcoming “positive overtures” made by the Iranian government since Hassan Rouhani became president in August 2013, the report states “they currently do not address fully the fundamental human rights concerns” raised by the U.N. and other human rights-focused bodies.

An estimated 1,539 individuals have been executed, including at least 955 for drug trafficking, since the establishment of the special rapporteur’s mandate in 2011, according to the report.

Some 687 individuals are also believed to have been executed in 2013, 369 of which were announced by official or semi-official government sources.

At least 57 individuals were publicly hanged (one of whom was pardoned after surviving the execution), including at least 28 women, in 2013, according to the report.

In addition to focusing on allegations of the abuse and imprisonment of activists, ethnic and religious minorities and members of the press, the special rapporteur estimates that 900 political prisoners are currently being held in Iranian jails.

Sarah Leah Whitson, the executive director for Middle East & North Africa at Human Rights Watch, told IPS the report’s “findings are consistent with what we’ve been documenting in Iran.

“If Rouhani really wants to make an impression as a leader who is serious about reform in Iran, the first thing he should do is call for a moratorium on executions,” she said.

“The gruesome numbers in a patently unfair justice system cry out for careful review and scrutiny of the evidence against all those facing death sentences in Iran,” added Whitson.

On Wednesday, U.N. Secretary-General Ban Ki-moon said Rouhani has not delivered on his human rights promises after the release of his own report on Iranian human rights to the General Assembly.

His remarks were met with sharp condemnation from Tehran.

Ali Akbar Velayati, an advisor to Iran’s Supreme Leader Ayatollah Ali Khamenei, called Ban “the weakest secretary-general [in the history] of the U.N.”

Speaker of the Iranian Parliament Ali Larijani said the report was “dictated by Mossad and the CIA.”

Ban also called for Iran to allow Shaheed, who previously served two terms as the foreign minister of the Maldives, to visit Iran and investigate the charges that have been laid against it.

Last January, when a draft of the special rapporteur’s report was presented to Iran for feedback, Iran’s judiciary head Sadegh Larijani publicly spoke about the report, which violated a U.N. protocol requiring Iran to keep the report confidential until its release to the Human Rights Council.

“It is clear to all that preparing biased reports about the situation of human rights in Iran is aimed to exert more pressure on the Islamic Republic, and the Westerners don’t really have any human rights concerns,” said Larijani at a meeting of high-ranking judicial officials.

“Personal attacks are nothing new,” Shaheed told IPS, adding that “If a U.N. mandate holder, or the U.N. secretary-general, or other officials can be attacked so much for what they say, just think what Iranian citizens in Tehran or elsewhere might get if they speak out.”

“Iran is much better served if it engages in a debate,” he said.

The special rapporteur’s findings criticise the Iranian Supreme Leader’s extensive influence on the judiciary and the fact that his judgments can supersede judicial rulings.

The report also states that most reported violations of human rights in Iran occur during pre-trial stages, in detention centres or in court.

“The situation in Iran is not as bleak as Mr. Shaheed reflects in his report, but so long as there is no constructive dialogue between the two sides, nothing can be resolved,” a member of the Iranian delegation who asked not to be named told IPS.

The judiciary is constitutionally independent from the executive branch in Iran, but since the election of Rouhani, who campaigned on a platform of moderation, there has been a growing expectation for him to implement reforms.

But apart from the release of 80 political prisoners last year under Rouhani’s watch, which is noted by the report, hardline conservatives who dominate the Judiciary and the security establishment have shown little flexibility on the issue of reforms .

“Every country has issues, and Iran has a large share of that and it should address it by engagement,” Shaheed told IPS.

The Human Rights Council will vote on the renewal of his mandate following the report’s review on Mar. 17.