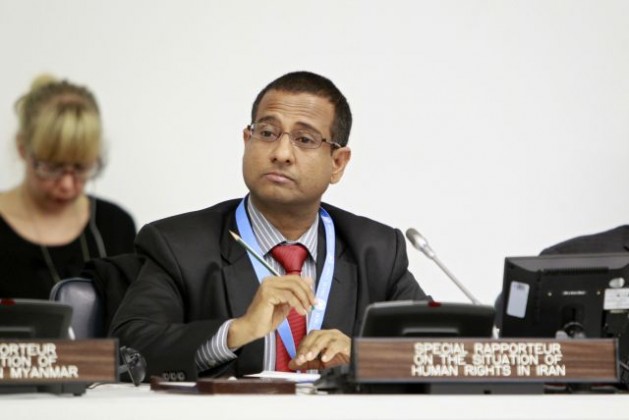 Ahmed Shaheed, UN Special Rapporteur on the Situation of Human Rights in the Islamic Republic of Iran, reviews his findings at a meeting of the General Assembly’s Third Committee on the promotion and protection of human rights. Credit: UN Photo/Rick Bajornas

UNITED NATIONS, Oct 25 2012 (IPS) - More than a year into his mandate, Ahmed Shaheed, the U.N. Special Rapporteur on Human Rights in Iran, told the Third Committee of the U.N. General Assembly this week that the rights situation in Iran remains critical, especially as it pertains to human rights defenders, journalists, and religious and ethnic minorities.

According to Shaheed, more than 40 Iranian journalists are in prison, along with human rights defenders like Abdolfattah Soltani, Mohammad Ali Dadkhah, and Mohammad Seifzadeh. These individuals, along with prominent activist Narges Mohammadi, were members of a human rights organisation under the direction of Nobel Peace Laureate and attorney Shirin Ebadi.

Due to government harassment, Ebadi is now forced to live outside Iran to continue her human rights advocacy.

Altogether, Shaheed’s report estimates that some 32 lawyers have been prosecuted since 2009, and that at least nine defence attorneys are currently imprisoned.

Since his appointment in June 2011, the Iranian government has refused to respond to Shaheed’s multiple requests to travel to Iran and visit prisons there, although he conducted nearly 100 interviews with sources both within and outside the country to prepare his reports.

He told IPS on Tuesday that the Iranian government’s response to his mandate and his reports has been “evolving”, even though Tehran has repeatedly denied him a visa to visit the country.

“Their initial response was that they would not deal with me at all,” Shaheed told IPS. “Now you see that they have actually responded to reports that are out there. In fact, I have written about 20 different communications to the Iranian authorities and I have received some responses to these inquiries, so they haven’t entirely ignored me.”

Shaheed is not the only official barred from visiting Iranian prisons. Last week, President Mahmoud Ahmadinejad was denied a request by the judiciary to allow him to visit Evin Prison, where most political detainees are held.

Though Shaheed’s and Ahmadinejad’s reasons for visiting Evin Prison may be quite different, the Iranian security apparatus’ lack of transparency and lawlessness appear to have closed the doors of the notorious prison even to high-ranking Iranian officials.

Last week, Shaheed’s report was distributed among U.N. diplomats. Immediately after its release, the head of Iran’s judiciary denounced the report as “baseless”.

“The U.N. Special Rapporteur’s third report, like his previous reports, is full of baseless and untrue statements,” Sadegh Larijani said on Iran’s state television. “Most of what they say takes issue with a fundamental discussion which pertains to all Islamic countries, and it is one which objects to Islamic laws, and unfortunately, Islamic countries are asleep, because presently we are the target of such talk.

“Nonetheless, all of this is an attack on them. Most of the issues are objections to Islamic laws. They object to our Islamic values,” Larijani told reporters.

Shaheed denies the accusations. “We can discuss the Sharia law itself and also the case of Iran’s commitments to international law,” he told IPS. “But that dialogue must happen, and my point to Iran is: observe your own laws, they are written by the people of Iran, some of them recently, and they will improve a vast majority of issues that are there. I think international alertness about what is happening in the country will help address issues of concern.”

One of the major issues raised by Third Committee members as well as Shaheed’s report was the glaring increase in the number of executions in Iran.

In June 2012, two men were sentenced to death for consuming alcohol for the third time, the report states. “At least 141 officially-announced executions are known to have been carried out between January and early June 2012. Several sources have reported that another 82 secret executions would have been carried out during the same time period, and that there were 53 executions across the country during one week in May 2012; 43, the majority of executions were reportedly related to drug offences.”

Larijani says that the death penalty is implemented in the interest of public safety. “The executions are mostly carried out for drug traffickers and sex offenders. How can we sell out the country’s peace to your rhetoric?” he said.

In response to a question by IPS regarding how his reports might impact rights victims’ lives inside Iran, Shaheed said, “If you are a victim of rights violations, documenting your case helps you. Being the voice of the voiceless is an important role that the mandate holder can play. Of course I was very disappointed when this past Monday, 13 people were executed. But as more people talk about Iran, I think we will begin to make a difference.

“I’m not the only one talking about Iran,” Shaheed emphasised. “The Human Rights Committee this past year raised some very serious concerns about Iran, and Iran is again up for review in Geneva next year. I am sure there are issues of concern, and I think all this focus on violations and the prescription of what should be done and the desire on the part of other people to engage with Iran to define ways to address these issues is important.”

The United States, Britain, Canada, Norway, Switzerland, the Czech Republic and Brazil welcomed Shaheed’s report and asked Iran to cooperate with his mandate.