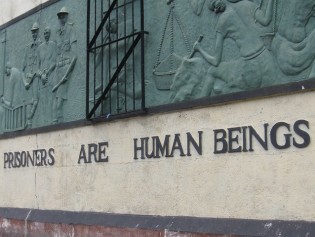 Death Sentences up, Executions down in 2014

By Josh Butler
Governments worldwide sentenced at least 2,466 people to death in 2014; judgements which have been condemned by rights group Amnesty International.

By Josh Butler
More than 40 human rights groups from around the world have penned an open letter to Indonesian President Joko Widodo, pleading for the halting of 10 imminent executions.

By Jim Lobe
International human rights groups have strongly denounced Monday’s sentencing by an Egyptian court of 529 Islamists to death for a riot in which one policeman was killed.

Death Penalty – A Long and Constant Path Towards Abolition

By Emma Bonino
Until the late 1970s, only 16 countries had abolished the capital punishment for all crimes. Today, abolitionist nations are the overwhelming majority. More than two-thirds of nations, over 150 of the 193 members of the United Nations, have now rejected the death penalty or do not carry out executions.

By Ashfaq Yusufzai
The execution of three Taliban men ordered by the courts has been kept on hold - not because the Pakistani government opposes the death penalty but because it fears the Taliban, political leaders say.

Execution Met With Silence in Pakistan

By Zofeen Ebrahim
Wednesday, Nov. 21, dawned like any other in the sleepy town of Faridkot, located some 150 kilometres from the Punjab capital of Lahore in Pakistan. But as the town’s 3000 residents went about their daily routines the air grew thick with apprehension, for a reason none wanted to mention.

Death Penalty Campaigners Worry About the Steps Back

By Isolda Agazzi
Ten years of campaigning by the World Coalition against the Death Penalty have brought fruit: the number of countries that have abolished capital punishment in law or practice has gone up to 140. But some countries have resumed executions this year.

By Dennis Engbarth
Human rights activists warn that Taiwan government prosecutors have sent a message that torture is permissible by refusing to indict a former defence minister and eight other former military officers behind the wrongful execution of a young Air Force private by torturing him into confessing rape and murder.
Next Page »
ADVERTISEMENT ADVERTISEMENT