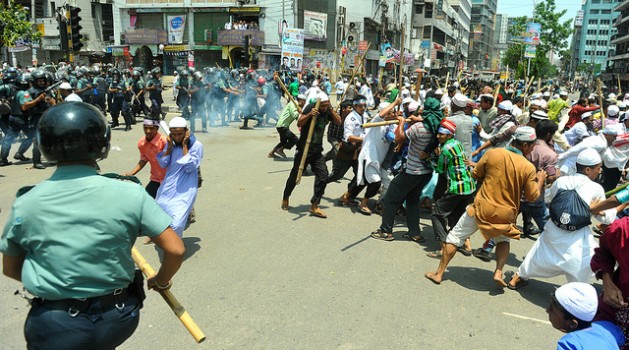 UNITED NATIONS, Feb 25 2015 (IPS) - The cradle of some of the world’s most ancient civilizations, home to four out of the planet’s six billion people, and a battleground for the earth’s remaining resources, Asia and the Pacific are poised to play a defining role in international affairs in the coming decade.

But what does the future look like for those working behind the scenes in these rising economies, fighting to safeguard basic rights and ensure an equitable distribution of wealth and power in a region where 70 percent of the population lives on less than a dollar a day?

In its flagship annual report, the State of the World’s Human Rights, released Wednesday, Amnesty International (AI) slams the overall trend in the region as being “regressive”, pinpointing among other issues a poor track record on media freedom, rising violence against ethnic and religious minorities, and state repression of activists and civil society organisations.

The presence of armed groups and continuing conflict in countries like Pakistan, particularly in its northern tribal belt known as the Federally Administered Tribal Areas (FATA), as well as in Myanmar and Thailand, constitute a major obstacle to millions of people trying to live normal lives.

Much of the region’s sprawling population is constantly on the move, with the U.N. Refugee Agency (UNHCR) counting 3.5 million refugees, 1.9 million internally displaced people (IDPs), and 1.4 million stateless people, mostly hailing from Afghanistan and Myanmar.

UNHCR has documented a host of challenges facing these homeless, sometimes stateless, people in the Asia-Pacific region including sexual violence towards vulnerable women and girls and a lack of access to formal job markets pushing thousands into informal, bonded or other exploitative forms of labor.

Intolerance towards religious minorities remains a thorny issue in several countries in Asia; Pakistan’s blasphemy laws have allowed for the continued prosecution of Shi’a Muslims, Ahmadis and Christians, while hard-line Buddhist nationalist groups in both Myanmar and Sri Lanka have operated with impunity, leading to attacks – sometimes deadly – on Muslim communities.

Meanwhile, ethnic Tibetans in China have encountered an iron fist in their efforts to practice their rights to freedom of assembly, speech, and political association. Since 2009, about 130 people have set themselves aflame in protest of the Chinese government’s authoritarian rule in the plateau.

A dark forecast for women and girls

Despite all the conventions ratified and millions of demonstrators in the streets, violence against women and girls continues unchecked across Asia and the Pacific, says the AI report.

In the Pacific island of Papua New Guinea, home to seven million people, an estimated 75 percent of women and girls experience some form of gender-based or domestic violence, largely due to the age-old practice of persecuting women in the predominantly rural country for practicing ‘sorcery’.

In the first six months of 2014, the Afghanistan Independent Human Rights Commission had recorded 4,154 cases of violence against women, according to the AI report, while India’s National Crime Records Bureau (NCRB) reported an average of 24,923 rapes per year.

A 2013 U.N. Women study involving 10,000 men throughout Asia and the Pacific found that nearly half of all respondents admitted to using physical or sexual abuse against a partner.

According to the U.N. Population Fund (UNFPA), two out of every five girls in South Asia could wind up as child brides, with the highest prevalence in Bangladesh (66 percent), tailed closely by India (47 percent), Nepal (41 percent) and Afghanistan (39 percent).

“In East Asia and the Pacific,” the organisation said, “the prevalence of child marriage is 18 percent, with 9.2 million women aged 20-24 married as children in 2010.”

Amnesty’s report presents a cross-section of government responses to activism, including in China – where rights defender Cao Shunli passed away in a hospital early last year after being refused proper medical treatment – and in North Korea, where “there appeared to be no independent civil society organisations, newspapers or political parties [and] North Koreans were liable to be searched by the authorities and could be punished for reading, watching or listening to foreign media materials.”

Imposition of martial law in Thailand saw the detention of several activists and the banning of gatherings of more than five people, while the re-introduction of “colonial-era sedition legislation” in Malaysia allowed the government to crack down on dissidents, AI says.

Citizens of both Myanmar and Sri Lanka faced a virtually zero-tolerance policy when it came to organised protest, with rights defenders and activists of all stripes detained, threatened, attacked or jailed.

Throughout the region media outlets had a bad year in 2014, with over 200 journalists jailed and at least a dozen murdered according to the Committee to Protect Journalists (CPJ).

Amnesty’s report also found torture and other forms of ill treatment to be a continuing reality in the region, naming and shaming such countries as China, North Korea, the Philippines and Sri Lanka for their poor track record.

An earlier Amnesty International report, ‘Torture in 2014: 30 years of broken promises’, found that 23 Asia-Pacific states were still practicing torture, three decades after the U.N. adopted its 1984 Convention Against Torture.

In Pakistan the army, state intelligence agencies and the police all stand accused of resorting to torture, while prisoners detained by both the policy and military in Thailand allege they have experienced torture and other forms of ill treatment while in custody.

In that same vein, governments’ continued reliance on the death penalty across Asia and the Pacific demonstrates a grave violation of rights at the most basic level.

Amnesty International reported that 500 people were at risk of execution in Pakistan, while China, Japan and Vietnam also carried on with the use of capital punishment.

Perhaps the only positive trend was a rise in youth activism across the region, which is home to 640 million people between the ages of 10 and 24, according to the United Nations. The future of the region now lies with these young people, who will have to carve out the spaces in which to build a more tolerant, less violent society.