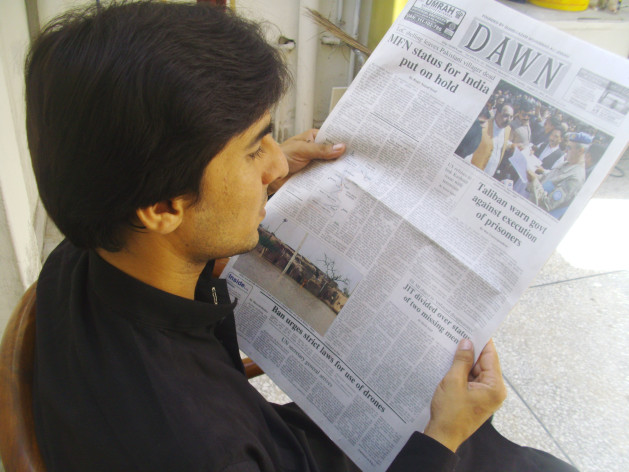 The Taliban warnings to the government against executions seem to have gone home. Credit: Ashfaq Yusufzai/IPS.

PESHAWAR, Pakistan, Sep 16 2013 (IPS) - The execution of three Taliban men ordered by the courts has been kept on hold – not because the Pakistani government opposes the death penalty but because it fears the Taliban, political leaders say.

“Stoppage of executions by the government means that it has succumbed to Taliban pressure,” Awami National Party (ANP) leader Mian Iftikhar Hussain told IPS. The government, he said, had “not been listening to the demand of civil society organisations.”

The ANP has long been targeted by the Taliban. The Tehrik-i/Taliban Pakistan (TTP) killed about 800 ANP leaders and workers when the party was in government in Khyber Pakhtunkhwa province of Pakistan (2008-2013) because of the party’s tough stand against them.

Hussain, a staunch opponent of the Taliban, says that the militants have not hesitated to carry out their own executions of innocent people in bomb and suicide attacks, but now want to stop legal executions of their men.

“The Taliban have killed hundreds of people without trial but are now making a hue and cry over the execution of their men."

“The Taliban have killed hundreds of people without trial but are now making a hue and cry over the execution of their men who were convicted by courts,” Hussain told IPS.

Attaullah Khan was awarded the death sentence in six cases by an anti-terrorism court in Karachi on Jul. 6, 2004. Mohammad Azam was sentenced to death in four cases by the same court on Aug 21. Jalal Shah was given the death sentence for related offences.

“The government scheduled executions of the three jihadists on Aug. 20, 21 and 22 but deferred the decision at the last moment,” Muhammad Irfan from the NGO Freedom for All told IPS.

“The PML-N (the ruling Pakistan Muslim League) government is afraid of the TTP due to which it has stopped the execution,” he said.

Militant outfits under the umbrella of the TTP have been killing people and forces in all provinces except Punjab. In the face of the execution order, the Punjab chapter of the Taliban issued warnings for the first time that it would carry out attacks in Punjab.

TTP spokesman Maulana Asmatullah Muavia said in a one-page statement Aug. 12 that the PML-N government “will have to pay a price” for execution of the Taliban prisoners.

“We have waged war against those political parties which have become puppets in the hands of the military. Some elements in secret agencies are trying to pitch the PML-N against Taliban,” he said.

The TTP alleged that the government had issued the death warrant for TTP prisoners under U.S. pressure, and urged the government not to execute the men.

ANP leaders say the government is being soft on the Taliban because the Taliban have been soft on Punjab. “Punjab has always been spared by the militants, who targeted Khyber Pakhtunkhwa, Balochistan and Sindh province because of the Punjab’s government’s soft corner for militants,” Senator Muhammad Adeel from the Awami National Party told IPS.

“The TTP has warned the PML-N of ANP-like attacks if it went ahead with planned executions of militants. Let’s wait and see. So far, the Punjab government has been in [the] Taliban’s good books.”

Shahbaz Sharif, younger brother of Prime Minister Nawaz Sharif, is chief minister of Punjab province. The LeJ, the Lashkar Toiba, Jamatu Dawa and other militants’ organisations are based in Punjab.

“Over the years, we have been demanding the Punjab government act against the militants but instead of acting against these terrorist outfits, Punjab is supporting them,” Adeel alleged.

Ruling party leaders say the men were convicted by the courts, and the decision lies with the courts. But few doubt that any decision will be politically influenced.

The files for the execution orders of five more condemned prisoners from the TTP had been forwarded to the Prime Minister’s office to be sent to the President so that the death warrants could be issued, interior minister Chaudhry Nisar Ali Khan has said.

Present indications are that the executions will not be carried out – but for the wrong reasons, ANP leaders say.