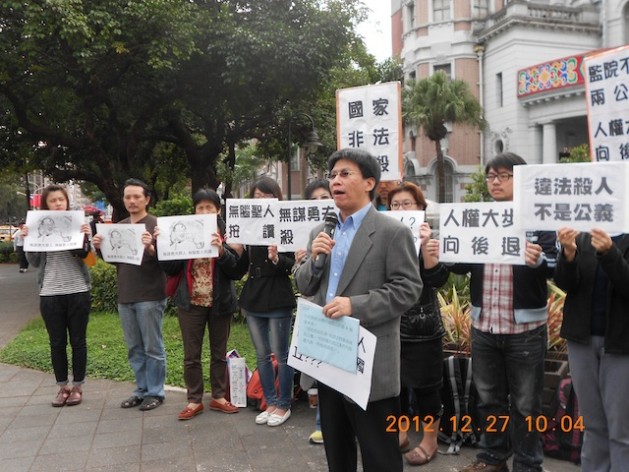 TAIPEI, Jan 8 2013 (IPS) - Taiwanese activists and human rights advocates ushered in the New Year with a push to prevent a return to authoritarianism and defend procedural justice for death row prisoners in the wake of six executions just before Christmas.

Rights lawyers say they “do not exclude” filing criminal charges against Justice Minister Tseng Yung-fu in addition to filing a petition calling for his impeachment for “illegally” ordering the execution of six death row convicts who had been handed death sentences, confirmed by the Taiwan Supreme Court, for a total of eight murders.

The men were executed on Dec. 21 by pistol shots to the head and heart in three prisons across Taiwan, without prior notification to families or lawyers.

The incident brought the total number of persons executed by the current government to 19. President Ma Ying-jeou of the ruling Chinese Nationalist Party (Kuomintang or KMT) broke a five-year moratorium on death penalty executions, begun by the previous Democratic Progressive Party administration, with four executions on Apr. 30, 2010.

A total of 55 convicts remain on death row.

The European Union and international and domestic human rights groups denounced the executions.

European Commission Vice President Catherine Ashton deplored the executions and called on Taipei to take concrete steps toward reducing the use of capital punishment to allow the resumption of a de facto moratorium.

The KMT government’s decision to carry out the executions overrode an appeal by a panel of prominent international human rights professionals slated to review Taiwan’s compliance with the two covenants in late February 2013.

Manfred Nowak, former United Nations special rapporteur on torture, and Eibe Riedel, joint expert committee member of the U.N. Committee on Economic, Social and Cultural Rights, issued a joint letter on Nov. 21 last year calling on Ma to refrain from carrying out any more executions before the February review.

According to Tseng, the ministry of justice (MOJ) had no choice but to carry out the executions after the prime suspect in a child murder sparked public outrage by claiming he knew he would not be executed and could enjoy a life in prison.

Tseng also declared that the MOJ has never promised to terminate the death penalty.

Shortly after the incident, a coalition of Taiwan human rights organisations submitted an impeachment motion against Tseng to the Control Yuan, the branch of government responsible for monitoring malfeasance by government officials.

The petition, filed in person with Control Yuan Commissioner Yeh Yao-peng by Covenants Watch convenor Kao Yung-cheng, charged that Tseng’s signature on the execution orders on Dec. 20 violated Article 6-4 of the ICCPR, which has been ratified by this country and given effect in domestic law by the Implementation Act.

The petition added that the ICCPR article mandates that “anyone sentenced to death shall have the right to seek pardon or commutation of the sentence”.

Kao related that the Taiwan Alliance to End the Death Penalty (TAEDP) had helped 44 death row convicts, including the six executed December 21, to submit formal petitions for amnesty, pardon or commutation of sentence to President Ma on Mar. 29, 2010.

The president gave no indication that he approved or rejected the petitions, Kao told IPS.

In its Dec. 21 statement, the MOJ said the executions had been carried out in accordance with existing law, including the Amnesty Act, which does not specify a procedure for petitions.

However, Kao told IPS that the Implementation Act grants the covenants “priority application” over other laws, a principle reaffirmed by Ma himself in a Dec. 18 news conference.

Therefore, Tseng was legally required to respect the right of petition for amnesty by “first certifying that the president had already rejected appeals for amnesty before carrying out” the executions, Kao said.

The petition concluded that the justice minister committed a grave violation of law and abuse of authority and asked the Control Yuan to impeach Tseng.

Kao told IPS that the impeachment petition is distinct from the question of abolition but instead concerns procedural justice.

If people can be executed, regardless of the reasons, without authorities fulfilling the required legal process, Taiwan will be put back on the road to authoritarianism, Kao warned.

He also told IPS that human rights groups are discussing filing criminal charges against Tseng, who could be liable for punishment under Article 127 of the Criminal Code with up to five years’ imprisonment.

Ironically, while the MOJ claims that public polls showed an overwhelming majority in favour of the death penalty, most citizens lack confidence in the judicial process itself.

A poll of 1,073 adults conducted by the Taiwan Thinktank in mid December showed that 64.4 percent believed the judiciary had been “unfair” in its judgements during 2012, compared with just 21.4 percent who believed the justice system was “fair”.

Activists also warned that the executions could further undermine the quality of the judicial process.

Academica Institution for Jurispurdence Deputy Research Fellow Liao Fu-teh told IPS that “the death penalty may be being used as a tool of intimidation”.

Liao cited media reports on Dec. 23, 2012, which related that a suspect being detained for questioning in Hualien in eastern Taiwan in connection with the murder of her mother had been “frightened” by the executions and, after months of denials, confessed to committing the killing with her boyfriend, to avoid being executed.

Criticism of the apparent lack of official respect for the two covenants intensified during 2012.