GENEVA, Mar 21 2011 (IPS) - Forty-nine United Nations member-states have co-sponsored a resolution asking for a special mechanism to monitor Iran’s human rights situation, which is expected to be voted later this week at the UN Human Rights Council (HRC). 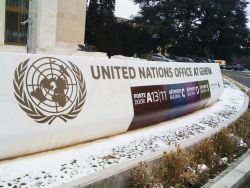 Rights situation in Iran has been drawing the focus at the the UN Human Rights Council in Geneva. Credit: Omid Memarian / IPS

Instead of responding to the criticism in the four-week long sixteenth session of the Council, the Islamic Republic of Iran’s delegation chose to bash the human rights situation in the United States, the country leading the effort to intensify pressure on Iran.

Eileen Chamberlain Donahoe, the U.S. representative to the Council, told IPS that establishing a special monitoring mechanism for Iran by the HRC is very significant. “Because the council in the past has been resistant to taking initiative on what we call country specific human rights situation,” she said.

“We think the facts speak for themselves,” she maintained, referring to Iran’s human rights record and plead for a special mechanism at HRC. “The reason, there is so much support for this, cross regionally, is because the facts in the case of Iran are extreme when it comes to human rights.”

Observers attending the session believe that Iran’s verbal attacks on the U.S. will not be able to disrupt the consensus among the member states of the UNHRC, on the worsening human rights situation in the country.

A number of Western diplomats close to the process under way told IPS that the Iranian government had intensely lobbied with the Organization of Islamic Countries (OIC) and the Non Aligned Movement (NAM) to oppose the adoption of a special mechanism, but had not received vocal support.

The U.S. sponsored move obtained flanking support from UN Secretary General Ban Ki-moon. He published on Mar 14 an interim report about the deteriorating rights situation in Iran, expressing serious concern about the Islamic Republic’s lack of regard for its international commitments such as the United Nations resolutions. In this report, the Secretary General pointed to 60 executions inside the Mashad Prison — executions the Iranian authorities have never announced.

According to reports by staff members of the UN High Commissioner on Human Rights, in discussions with their Iranian counterparts, they verified the accuracy of reports of executions earlier made by independent human rights organizations.

“The report highlights many areas of continuing concern for human rights in the Islamic Republic of Iran,” stated Ban’s interim report. “The Secretary-General has been deeply troubled by reports of increased executions, amputations, arbitrary arrest and detention, unfair trials, and possible torture and ill-treatment of human rights activists, lawyers, journalists and opposition activists.”

The Iranian delegation to the HRC’s current session did not comment on the report.

Under Item 4 of the HRC mandate, representatives from different countries stated in a list human rights violations in Iran, including pressure on human rights lawyers through imprisonment as in the case of Nasrin Sotoudeh; house arrest of two reformist political leaders, Mir Hossein Mousavi and Mehdi Karroubi; pressure on religious minorities such as the Baha’is; and torture inside the Iranian prisons.

Responding to criticism by the Council member states, the Iranian delegation used the time allocated for its response to focus on the violation of human rights in the U.S., such as water boarding, police brutality and violation of the rights of Native Americans. Sweden was one of the states supporting the resolution against Iran. The Iranian delegation also accused Sweden of violating the rights of minorities.

While HRC member states are requesting a special monitoring mechanism, or appointment of Special Rapporteurs for Iran, the Iranian government is at pains to bloc the move, with indirect backing of a dozen pro-government NGOs, accompanying the official delegation, which strongly support the regime’s record.

Members of the Iranian delegation comprising a number of high-ranking officials from the Iranian Judiciary and the Foreign Ministry, claims that the NGOs are genuine representatives of Iran’s civil society.

But independent human rights activists, present at the session, told IPS that these NGOs should be considered no more than a team of GONGOs. (Governmental Organized NGOs)

“The plane carrying the Iranian NGOs lands with the Iranian delegation,” said a western diplomat jokingly. “Iran has no resolve for improving the human rights situation, does not act upon the resolutions, does not answer the UN special procedures inquiries, and in the end, wishes to deflect attention from the deteriorating conditions of human rights through a propaganda circus.”

“The human rights team at the HRC session is an entirely political team and is not very familiar with human rights topics,” said a member of the Iranian delegation on condition of anonymity. “All efforts are focused on attacking the U.S. If they had asked the experts accompanying the delegation, they could have drafted better statements. But they don’t trust anyone other than themselves.”

But not all pro-government NGOs seemed to be happy with their presence at the session. “We are shocked with the anti-Iran atmosphere at the session. The Iranians in attendance at the session call us spies, traitors, mercenaries. It’s a very heavy atmosphere. In fact many of us didn’t even vote for Ahmadinejad; we voted for Mousavi. But everyone sees us as a part of the government,” said a, NGO member of the Iranian delegation.

“The new human rights body started on a very weak footing without the U.S. leadership,” Dokhi Fassihian, the Director of Washington-based Democracy Coalition Project that oversees the implementation of multilateral human rights strategies through the United Nations, told IPS. But Obama administration’s initiative against Iran indicated that things would change, she added.