PARIS, Mar 15 2011 (IPS) - Tourism as a concern found its way onto the agenda of the 1992 Earth Summit in Rio de Janeiro because of its potential for development but also due to its adverse effects on some populations and natural resources, particularly in Africa. 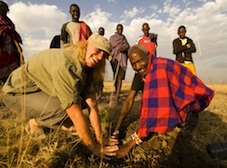 Sustainable tourism was defined at the summit as tourism that “meets the needs of present tourists and host regions while protecting and enhancing opportunities for the future”.

The many definitions of “responsible travel” all insist on the conservation of nature, of cultures, and on economic and social development. Meanwhile, the market has been booming.

Global figures are hard to come by. But “Responsible Travel”, a British tour operator that sells “travel which respect and benefits local people and the environment”, says it has sold 39,000 holidays since 2004.

ATES, the French Association for Fair Tourism, says it has sold holidays to 20,000 “responsible travellers” since 2006. Their annual numbers doubled between 2006 and 2009.

Tourism has indeed been hailed as the key to development in many countries. But its unintended consequences have included environmental degradation, as well as community factionalism and social stratification whenever communities do not enjoy a fair share of jobs and revenue.

“The history of tourism has been mostly negative for local communities and ecosystems,” says Amanda Stronza, an environmental anthropologist who teaches at the Texas A&M University.

“Cannibal Tours”, a 1988 anthropological documentary which follows bright- eyed, camera-laden tourists asking village elders when they last ate human flesh, and haggling over two dollars’ worth of wooden necklaces, is a vivid illustration of the underbelly of tourism.

“During the height of modernisation in international development in the 1970s, large-scale tourism was heralded enthusiastically and often uncritically as a veritable ‘passport to development’,” argues Stronza.

“Entire nations advertised themselves as pristine paradises and promised plenty of sun, sand, sea, and sex. The goals of tourism investment, then, were almost purely macroeconomic,” she says.

Sustainable tourism, by contrast, aims at empowering local communities to manage and benefit from environmentally sound accommodation and tours.

“It’s a model in which the tourist encounters genuine inhabitants of a place, who benefit from and run tourism ventures,” says Julien Buot, coordinator of ATES.

“It’s at the crossroads between cultural travel, development economics, fair trade and international solidarity,” he says.

The San, from the Kalahari desert in southern Africa, have had first-hand experience of the virtues and drawbacks of tourism. Scattered across Botswana, Namibia and Zimbabwe, they have organised to benefit from the numerous tourists eager to meet “Bushmen”.

“One of the big problems with tourism in San communities was the problem of unfair distribution of tourism benefits,” says Robert Hitchcock, who chairs the department of anthropology at Michigan State University.

“Social costs include greater access to alcohol, with contributes to community tensions, and the spread of diseases, including HIV and AIDS and tuberculosis,” he explains.

In the 1970s, the Botswana government shifted to the position that the San should not be exploited as ‘‘tourism objects’’, and that Gaborone should not be engaged in what some felt to be the ‘‘exploitation of the San’’.

“In some communities, responsible operators have worked out agreements with local people to hire them as guides, to provide some benefits for development projects and to run social services like medical care and professional training,” Hitchcock says. “But this is rare.”

“When all three actors participate, local people are able to contribute their knowledge and resources; tour operators can provide investment capital, business acumen, and managerial experience; and NGOs can help with networking, skills building and cultural brokering,” she explains.

There are dozens of sustainable tourism labels, many of which are not subject to a robust certification scheme.

“Ecotourism can never be a panacea for any community’s array of economic or social challenges,” Stronza says. “But NGO support may be ‘the secret ingredient’ for making ecotourism not just an end in itself, but also a catalyst for broader social, environmental, and cultural initiatives,” she believes.

However, some sustainable tourism operations are fragile, have failed in the past because of political instability or civil unrest in the region.

“This has happened to well-established operations, as in the Kenya safari industry a few years ago when violence over presidential elections erupted, or in northern Ecuador, where coca eradication is associated with guerrillas and terrorism,” Stronza points out.