NAIROBI, Mar 16 2011 (IPS) - A community-based organisation in the Kenyan slum area of Kibera set out to clean up garbage and deal with waste water; Ushiriki Wa Safi ended up creating a community cooker that turns waste into an energy source. 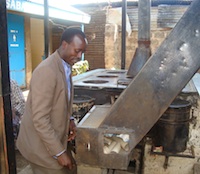 Open sewers and piles of garbage are an all too familiar scene in many of Kenya’s poorest urban areas. Local authorities are invisible in most of these slums, and poor public hygiene and the absence of sanitation leaves residents to their own devices to maintain a level of cleanliness and keep diseases like diarrhoea at bay.

But some have seen this as an opportunity to bring change to communities. Ushirika Wa Safi – (loosely translated, the name means “an association to maintain cleanliness” in Swahili) – a community-based organisation in Kibera, was formed to deal with the garbage problem in Laini Saba, one of the thirteen villages that form Kibera slums, often described as Africa’s largest.

The CBO has come up with a remarkable solution in the form of a community cooker that turns garbage into energy. It is a recycling project that is transforming the lives of local residents.

Discovering the wonders of the “cooker”

“When we started the CBO, the idea was to start a project that could help keep the environment clean. We therefore began by constructing trenches where people could pour dirty water. Further, we divided Laini Saba into four zones and each zone would meet once a week to collect and burn garbage,” explains Bernand Asanya, the project manager.

The four zones would meet every three months for a general cleaning exercise. This approach seemed satisfactory for a while but with time, people began to dump garbage into the trenches meant for dirty water.

This presented a fresh problem as the trenches began to look and smell like open sewers. It is at this point that Ushirika Wa Usafi decided to experiment by coming up with a garbage-fired boiler that would provide hot water for showering.

“We had already built a number of toilets and bathrooms where the community pays a few shillings to either use the toilet or to take a shower. The reality in Laini Saba, as is the case with most slums, is that there are neither toilets nor bathrooms. People bath in their tiny houses and relieve themselves in plastic bags,” Asanya explains.

Transforming the lives of the poor

But when they presented their idea to Planning Systems Services Limited (PLANNING) – a group of international architects – to assist them in developing a design, their idea developed into a pilot project that has transformed the lives of many residents of Laini Saba village.

The architects proposed that instead of developing an incinerator that would only heat water for bathing, they could develop a community cooker where the locals pay a fixed fee to cook their food.

As fate would have it, the chairman of PLANNING, Jim Archer, had been developing a plan to address waste management in Africa and was determined to work together with the CBO.

“We therefore went back to the drawing board and bought 500 nylon sacks. We then approached the local chief with our idea and he helped us organise a meeting with the locals. During this meeting we communicated our intention to maintain cleanliness and also to build a community cooker,” adds Asanya.

The sacks were distributed to the people with the instructions that once the sack was full the CBO, with the help of a group of young people would come by to collect the garbage in a wheelbarrow, immediately return the sack to the owner.

The garbage would then be deposited at the project site for sorting. “We don’t burn everything,” Asanya says. “We sell some of the garbage as scrap and make money from it. Material that can be burnt is then channeled into the cooker and used to generate heat.”

“This community cooker has changed our lives. For a very small fee I can cook the meal of my choice, bake, and even take a hot bath at the adjacent bathrooms as I wait for my food to cook,” explains Nora Kaseu, a beneficiary.

The CBO has employed a caretaker who is always on standby to keep the cooker burning. What seemed like an impossible situation of garbage control has led to the creation of employment for youths who collect the garbage, as well as the caretakers working at the project site. It has given the community an environmentally friendly way of disposing of waste.

Resident Daina Waithera, says that compared to other sources of fuel, it is proving quite economical: “The ashes from the cookers are also useful. They are collected by people who have pit latrines at home to keep away the foul smell and to keep the waste from rising to the surface.”