LIMA, Mar 7 2011 (IPS) - United Nations High Representative for Disarmament Sergio Duarte said heads of state who call for a reduction in military spending should practice what they preach. 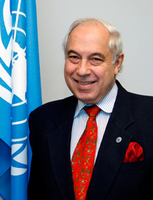 Duarte was commenting to IPS on the position taken by centre-right Peruvian President Alan García, who has come in for criticism for calling for a curb on military spending in Latin America while increasing arms purchases in Peru. “There is a contradiction between intentions and actions,” the Brazilian diplomat said.

Since the 2006 start of García’s term, which ends in July, Peru’s armed forces have spent 807 million dollars on weapons and other war materiel — an average of 161.4 million dollars a year and 13.4 million dollars a month — the highest spending on upgrading the country’s military since the regime of Alberto Fujimori (1990-2000), according to different sources.

Duarte was in Lima as the key-note speaker in a Feb. 28-Mar. 1 seminar on peace, security and development in Latin America organised by the Foreign Ministry as part of the Initiative for Peace and Disarmament in Latin America, launched by García in 2009.

U.N. Secretary-General Ban Ki Moon publicly expressed his support for the initiative to reduce defence spending in order to benefit social and economic development, after a Feb. 15 meeting with the Peruvian president during a visit to Lima.

“Of course the U.N. backs the proposal, because it is better to spend on health or education,” Duarte said. “That depends, however, on each nation.”

Transparency remains a serious problem for the control of the global arms race, Duarte said.

In 2010, only eight countries submitted data on the arms they exported or imported in the previous calendar year to the U.N. Office of Disarmament Affairs (UNODA), for its annual Transparency in Armaments report. In 2001, 23 countries sent in data.

During García’s first three years in office, Peru failed to submit information to UNODA — which Duarte heads — unlike neighbouring Chile and Ecuador.

“I believe that the more nations seek understandings and agreement on policies, the more transparent arms purchases will be,” he added.

According to the 2010 Yearbook by the Stockholm International Peace Research Institute (SIPRI), in Latin America, military spending increased the most in Brazil, Chile, Venezuela and Peru.

But Duarte said the figures cited by SIPRI did not indicate an “arms race” in this region. “What I would say we are seeing is a tendency to upgrade existing equipment,” he stated.

But that upgrade in turn triggers weapons purchases in neighbouring countries, especially in cases of long-standing border disputes or military tension.

A case in point is that of Peru and Chile. Santiago’s purchase of 132 Leopard 2 tanks from the German army for 124 million dollars prompted the Peruvian army to acquire 113.7 million dollars worth of Israeli and Russian anti-tank missiles.

And Chilean air force purchases bringing its total fleet of F-16 fighter jets to 46 led Peru’s air force to refurbish its fleet of 12 Mirage 2000s and 19 MiG-29s, while it is also preparing to upgrade 18 Russian Sukhoi-25 fighter bombers.

“Even as countries find new forms of understanding, the arms race will always remain a remote possibility,” Duarte said.

“Transparency in spending on weapons is a very important step in building mutual trust,” he added.

The United States is concerned about Peru’s tendency to respond to military purchases in Chile by increasing its own budget for weapons expenditure, cables from the U.S. Embassy in Peru leaked by the Wikileaks whistleblower web site showed.

On Nov. 25, 2009, U.S. Ambassador Michael McKinley sent a confidential memorandum to the commander of the U.S. Southern Command, General Douglas Fraser, stating that “We have also sought to support Peru’s plan to reorient its security posture away from its perceived conventional threats from its neighbours (mainly Chile) and to modernise its military’s doctrines and retool its operational capabilities to confront its internal threats.”

In another cable, dated Dec. 15, 2009, McKinley was even more direct, expressing surprise over an announcement by García that Peru would buy Chinese MBT-2000 tanks to replace its T-55 tanks purchased from the former Soviet Union during the 1960s and 1970s, at the same time that he urged the region to curtail military spending.

“These defence acquisitions come as something of a surprise, in light of President Garcia’s intensively pursued regional ‘Peace and Security Cooperation’ initiative,” the U.S. ambassador wrote.

“That the flurry of Peru’s high-profile peace-initiative diplomacy was punctuated by a domestic defence acquisitions announcement of this size has caught the government in a kind of double bind. But government officials have sought to deflect the apparent contradiction,” he added.

That same year, García said the (now cancelled) purchase of tanks from China was going ahead, five weeks after the Peruvian government accused air force Sergeant Víctor Ariza of spying for Chile since 2004.

Critics of the government’s excessive spending on weapons stress that in his five years in power, García spent 807 million dollars on military purchases, equivalent to six years’ spending on the “Glass of Milk” Programme aimed at providing nutritional supplements to 2.7 million children and adults in extreme poverty.