BUTUO, Liberia, Apr 4 2011 (IPS) - The yard at Peter Saye’s is full: of kids, of cooking pots, of chickens, goats, and piles of belongings. Women carry firewood and stir coals, plait hair and snap at the children scampering around in the dust. There are nearly 100 refugees sheltering here from the violence across the border in Côte d’Ivoire. 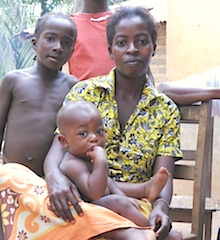 Forces supporting Alassane Ouattara, the internationally-acknowledged victor of November 2010 elections have rapidly moved rapidly from the north of the country – which they had controlled since the 2002-2003 civil war.

Their recent rapid progress south to encircle the economic capital, Abidjan, which has become the last stronghold for the incumbent president, Laurent Gbagbo, precipitated a rapid increase in refugees seeking shelter in Liberia.

Local populations are overwhelmed and help has been slow to arrive. International attention and support is diverted by major crises elsewhere, and a set of hangups, holdups and logistical obstacles are creating a catch-22 in a crisis that looms larger by the day.

In Nimba County, where the bulk of the more than 100,000 Ivorian refugees in Liberia are scattered through nearly 100 remote communities, the U.N. refugee agency says food will now only be supplied to those who move to transit centres, designated host communities or a main camp some 60 kilometres away.

But many refugees prefer to wait it out near the border where they can look for lost relatives and scrounge traditional foods – rice and cassava – rather than taking a bumpy, hours-long ride in the back of a cargo truck to a camp where they’ll be fed on a diet of bulgur wheat.

Mezouw Pellagie, from the village of Bin Houye right across the border from Butuo, holds a baby on her lap in Saye's yard. She came last year when incumbent President Laurent Gbagbo refused to step down after the U.N. certified his opponent, Alassane Ouattara, as the victor in presidential elections.

The deadlock did not immediately provoke major violence and Pellagie returned home. Then fighting broke out between the former rebels who have controlled the north of Côte d'Ivoire since a 2002-2003 civil war and forces aligned with Gbagbo. She came back to Liberia.


Sayeh Gayegbaye, a spokesman for refugees in Butuo, says they understand they won’t receive food unless they go to the camp at Bahn.

“I would be pleased to go to Bahn except for the distribution of bulgur wheat,” says Gayegbaye. “Because of that, I don’t want to go there.”

As long as there is any food along the border, they’ll stay put, he says.

There are songs and poems composed about the horrors of bulgur wheat, a staple commonly distributed by the World Food Programme in the region. The complaint is nearly universal: it makes your stomach run. In other words, diarrhoea.

“We’re facing a problem with our pipeline in terms of arrival times and transport,” says Bailey. “It’s trying to get rice from neighbouring countries… If we can’t get rice, we go ahead with the bulgur.”

The agency is struggling with an ever-changing situation, particularly in Nimba where refugees are spread over a vast area, much of it barely accessible by road, as well as constantly moving back and forth over the border frequently.

Maintaining roads and bridges will be extremely difficult once the rainy season starts in April, some of the communities sheltering refugees will be virtually out of reach for months.

The border is infamously porous and there are widespread reports of mercenary movements along it. Fighting at times is so close it’s audible from Liberia, in a region where wars have had a tendency to jump borders.

UNHCR spokesman Sulaiman Momodu says refugees need to move for security and effective aid delivery, stressing the need to manage people’s expectations as agencies grapple to deal with the crisis.

“We are in an emergency. We are trying to stabilise and move to the regular thing that happens in a refugee situation, where you establish camps,” says Momodu. “But there’s a need for people to move.”

And as the fighting has moved swiftly south through Côte d’Ivoire, so has Liberia’s refugee crisis. More than 24,000 refugees have recently entered Grand Gedeh County, south of Nimba, and the scramble is on to put needed infrastructure in place there despite vast funding gaps.

“The bottom line is we need funds, and so far we have not received enough, there’s still a gap,” says Momodu.

Peter Saye is one of thousands of Liberians whose food supplies, meant to last until the next harvest in six or more months, have been decimated. He’s given away everything in his kitchen and his storeroom; his cassava patch is nearly gone. The water from his pump is running dry and the latrine overflowing.

People go back and forth to get food from Côte d’Ivoire, she says, but pro-Ouattara soldiers who now control the area across the river take most of it. Still, Pellagie says they won’t go to a camp.

“(Saye) is really taking care of us, so we see no reason to go to the camp,” says Pellagie.

His friends worry what he will do since he’s given away all his food, but he says whatever he has is for all.

“They can stay as long as they need. Whatever we have, we will share. When food runs out…”

He pauses, chuckles. “Well, we’ll all just be sitting. We can just pray that God will provide.”