BANGKOK, Apr 6 2011 (IPS) - The World Bank is facing mounting opposition from a broad network of green and grassroots activists over its role in a new global Green Climate Fund (GCF) aimed at helping developing countries combat the ravages of climate change. 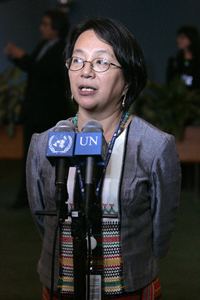 “In spite of the climate and economic crises, the World Bank continues to finance fossil fuel projects at an alarming rate, promote false solutions to the climate crisis, and use funding instruments that increase indebtedness of developing countries,” charged a coalition of nearly 100 local and international civil society organisations in a letter released here during on- going negotiations at the first of three U.N. climate change conferences to be held in the lead up to the Durban COP17 summit in late November.

“The World Bank is not suited to advise in the design of a fund that must ensure fair and effective long-term financing based on the principles of environmental integrity, equity, sustainable development and democracy,” noted the two-page letter, whose signatories included global groups like Action Aid and International Rivers, regional groups like the Pan African Climate Justice Alliance and local groups like the Bolivian Climate Change Platform.

The letter was addressed to Patricia Espinosa, Mexico’s secretary of foreign affairs, and to Christina Figueres, the head of the Bonn-based climate change secretariat of the U.N. Framework Convention on Climate Change (UNFCCC).

It was at last December’s UNFCCC summit in Cancun, Mexico that a landmark blueprint emerged creating the GCF, which is aimed at financing efforts to reduce emissions of greenhouse gases (GHG) and to help communities adapt to the havoc created by climate change in the developing world.

The Bank was named as the new fund’s interim trustee for the first three years, until a more permanent financial architecture is built to steer much needed assistance to the world’s poorer nations.

A report by U.N. Secretary-General Ban Ki-moon’s climate financing advisory group released on the eve of the Mexico climate change summit estimated that 100 billion dollars a year is needed for climate change initiatives in the developing world.

Other estimates point to a higher figure – upwards of 400 billion dollars annually in the South – reveals the Jubilee South Asia-Pacific Movement on Debt and Development (JSAPMDD), a regional network of grassroots activists.

The GCF has been mandated to start forking out these new funds by 2020, which, according to the UNFCCC, will take the form of grants or concessional loans.

But the Bank’s record of programmes under the guise of ‘development’ in the poorer nations makes it the wrong choice to play a permanent role in administering the GCF, says Victoria Tauli-Corpuz, convener of the Asian Indigenous Women’s Network, a regional grassroots group based in Manila. “They are not a trusted institution in the developing world.”

“There is a fear among activists and some developing country governments that the Bank will secure approval to run the day-to-day operations of the GCF,” Tauli-Corpuz told IPS. “That will result in more obstructions for the poor and the vulnerable victims of climate change.”

“Climate finance is part of the reparations for climate debt owed by rich, industrialised countries to the peoples and countries of the South,” argues Ahmed Swapan of JSAPMDD. “The climate debt must be collected, managed and disbursed by an institution that is democratic, accountable, transparent and governed by a board with a majority coming from [the] South.”

Activists are concerned about a potential conflict-of-interest if the Bank secures the role as the secretariat of the GCF, since the Washington, D.C.- based multilateral financial institution will also have a part as a co-financier and implementer of projects.

As troubling is the Bank’s record in existing climate change funds, such as the Global Environmental Facility (GEF), which was established in 1991 to help developing countries adapt to the challenges of climate change. “To get funds from the GEF, countries had to go through implementing agencies like the United Nations Development Programme (UNDP), United Nations Environment Programme (UNEP) and the World Bank,” said Matthew Stilwell, policy adviser at the Institute for Governance and Sustainable Development, a Geneva-based think tank. “They had to jump through hoops, making it difficult to access funds.”

Consequently, developing countries are “advocating for more direct access to the funds” of the GCF, Stilwell told IPS. “They have learnt lessons from the past.”

But in the rooms of the U.N. conference centre here, where climate change negotiators from 190 countries are meeting from Apr. 3 – 8 to shape a new global environmental deal, the sources of funding for the GCF are also on the table.

“It will be new sources of funding,” Jozsef Feiler, the chief climate change negotiator for Hungary, currently the president of the council of the European Union, told IPS.

Yet activists are not convinced, given suggestions by negotiators from the developed world that funding would be from a combination of public and private sector sources.

“Funding should be from public sources, new and additional to official development assistance,” says Michelle Maynard of the Pan African Climate Justice Alliance. “The principles are simple: providing climate finance is a legal and moral obligation for rich countries.”