ABIDJAN, Apr 20 2011 (IPS) - The prime minister of Côte d’Ivoire, Guillaume Soro, held his first cabinet meeting away from the Golf Hotel on Tuesday. The meeting – at the Prime Minister’s Office in the Plateau d’Abidjan – was symbolic, intended to signal a return to normal life in a city that endured heavy fighting between Mar. 30 and the fall of former president Laurent Gbagbo on Apr. 11. 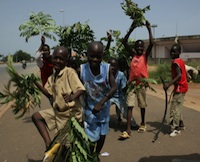 As members of the government of Alassane Ouattara ventured beyond the hotel they have sheltered in since the stand-off over results began last November, Abidjan, the commmercial capital of Côte d’Ivoire, and some other cities began to return to life. But the constant circulation of armed men – some of them in civilian clothes – worries the population.

Responding to a call from Ouattara, some officials returned to work, though extensive damage to buildings means it may be weeks before they can render services. Traffic has hesitantly resumed and some petrol stations have reopened, despite the damage done by looters. Many people stayed home, not yet reassured of their security.

“You have to be careful,” said Marc Tagny, a restaurant owner in the upscale neighbourhood of Cocody. “We will observe the situation until the end of the week before resuming full activities.”

Félicienne Tohou, a beautician in northeast neighbourhood of Yopougon shared the sentiment. “For now, we don’t know who is doing what, so we’re resuming business with care. But at the slightest sign of trouble, one has to be able to close up shop, and get home to shelter.”

More than a week after the fall of the Gbagbo regime, the new authorities are trying to re-establish order. But the police stations were burned down during the crisis, and security is still not functional. This has led French soldiers from Operation Licorne and the troops from the U.N. Mission in Côte d’Ivoire to to carry out patrols in the city.

Shops and markets across Abidjan have begun to restock. But the cost of food has not returned to even the elevated levels just before the battle of the capital began three weeks ago. The reason for this, according to merchants, is the many road blocks where armed men demand money from transporters before allowing them through.

Elements of the pro-Ouattara Republican Forces (FRCI) can also be seen patrolling many neighbourhoods and trying to reassure residents. But many are not convinced: they notice amongst those patrolling, numerous individuals, who before the FRCI seized Abidjan, were mechanics, minibus taxi drivers or unemployed.   “There are so many weapons in the neighbourhood and those who are carrying them are not very reassuring,” said Frédéric Koffi, manager of a phone kiosk in Abobo, in the north of Abidjan. “There are those who are using them to rob the population. And as the forces of law and order are absent, there are others who have taken it upon themselves to execute presumed thieves.”   On Apr. 7 and 8, Koffi told IPS, four people were executed in public at a roadblock in the Abobo-Baoulé section of Abobo. Three of them were accused of being pro-Gbagbo mercenaries and the last was a fugitive from the Abidjan prison.

“He had robbed a woman of 25,000 francs CFA (around 55 dollars). After she raised the alarm, he was caught and killed with a pistol,” said Koffi, who witnessed the incident. “Despite the ceasefire, armed men are celebrating, constantly firing bursts from their rifles. This sometimes disturbs one’s sleep.”

Outside Abidjan, the the situation is different. Extortion and intimidation have become the daily lot of the population. IPS counted 18 roadblocks along the 60 kilometre road from Abidjan to Adzopé.

“Those who refuse, get out of the car,” said a man at one of the roadblocks, dressed in a mesh vest and jeans, with a new Kalashnikov and a frown on his face. “Those who mess us around, we’ll kill.”

Back in Abidjan, political analyst Damine Kouadio says, “This fringe of armed militia poses a threat. There is an urgent need to relaunch the security forces and find a place for these combatants, because they could present a difficult problem for the authorities.”   He makes a gloomy prediction: “These youth will not be totally disarmed. The weapons that they hide will remain available to them. That is to say that it will be very difficult to restore peace across the country in two months, as President Ouattara has promised.”