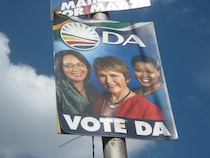 Amanda Gouws, a political analyst from Stellenbosch University, says a vote for the DA, the country’s official opposition, would not be a feminist vote or victory for women.

“The DA is not a feminist party and many of their women members in government are not either. De Lille and Zille do not have a feminist rhetoric – and let’s not forget that she appointed 10 men to her cabinet,” she said. Zille appointed a 10 member all-male cabinet in 2009.

Does a poster of three women mean anything for women in South Africa? Are their policies and plans going to benefit women at all? But what does this actually mean for women? These questions were posed recently by Jennifer Thorpe, editor of feminist blog Feminists SA.

“What it means for women is that there is room to manoeuvre, that politics is an arena where women can succeed and that it’s time for the ordinary women of South Africa to make demands on the government,” Thorpe said.

South African Communist Party secretary general Blade Nzimande labelled the three DA leaders the “two stooges and a madam”. Thorpe said the comments were unfortunate. “I think that Nzimande’s comments show a great insecurity about female leadership. This insecurity led him to cast the three DA leaders in the least threatening way possible for himself. It is clearly attempting to heighten racial fears of the DA that has a white woman as the leader.”

Thorpe said she doubted whether Nzimande would have felt confident to make the same comments if the poster showed three male candidates of similar racial groups. Thorpe said there is currently no political party that has framed itself as pursuing the specific interests of women.

“I don’t think that this absence is only specific to the DA, but found their election poster with three women interesting, given the all-male cabinet elected by Helen Zille in the previous national elections,” she said.

Zille raised the ire of feminists and gender activist organisations when she appointed an all-male cabinet following her election as the Western Cape premier in 2009. Zille’s all-male cabinet was seen as a move that confirmed the chronic minority status of women in politics. It further confirmed the long- standing notion that better representation of women in politics does not necessarily mean better representation of women’s interests.

Thorpe points out that the ruling African National Congress (ANC) Youth League’s discussion paper prepared for its national elective congress, scheduled to take place in June, acknowledges that historically women’s issues have been relegated to a subordinate position in favour of promoting economic or race equality.

Gouws says it was tragic that 17 years into democracy, the voters’ views of female candidates have not changed in South Africa. “Voters still have a male bias when it comes to politics. They will rather vote for a man than a woman,” she said.

Noluyolo Manyisane, a resident of Dunoon – a poor informal settlement in Cape Town – says Zille and De Lille seem to be doing well in politics, but she does not care because neither one pays her salary at the end of the month. Manyisane is an assistant at a pathology laboratory.

“Heck, bring in women politicians if they have new, creative ideas that might improve the living conditions of the poor. I used to vote for the ANC, but I have lost hope in the political process,” she said.

The Institute for Democracy in Africa’s political analyst, Justin Sylvester, has pointed out that there is a higher percentage of women in Parliament due to the ANC’s progressive gender policy. He said he was “not too sure” whether one should attribute progressiveness on the role of women political leaders to only the DA.

Since the first democratic elections in 1994, women representation in Parliament has soared, owing partly to the ruling party’s 50/50 principle at national and provincial spheres of government. After the 2009 elections, women’s representation in cabinet increased from 34 percent to 43 percent, a nine percent increase, and the country saw the accession of five women to the positions of premier in the country’s nine provinces.

However, women continue to struggle to make headway in political circles since many are still buried far down in the political hierarchy of most political parties due to the daunting conservatism of the South African political culture and its political institutions.

However, Thorpe says that it was promising that parties that had female leadership, like the DA and Independent Democrats, received a high number of votes in the previous election. “But I’m not sure whether this can be boiled down to the candidates, or has other explanations,” she said.

Although the participation of women in the political heartlands is a symptom of an even graver failure of progressive politics, feminists such as Thorpe have not lost hope.