BOGOTÁ, Jun 15 2011 (IPS) - “They are very distressed. Their father, mother and two brothers have been killed. They have expressed the wish to leave the country,” Colombian Vice President Angelino Garzón said after meeting Tuesday with the surviving daughters and son of Ana Fabricia Córdoba, a prominent land rights activist assassinated on Jun. 7. 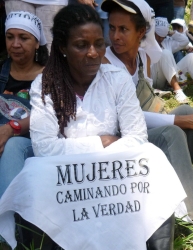 Diana, 27, Carlos Arturo, 18, and Carolina Ospina Córdoba, 12, are leaving the country. The murder committed in Medellín, Colombia’s industrial capital, was another last straw in the longest dirty war in Latin America.

Human rights defenders, social activists, indigenous and black leaders called off their dialogue with the government Monday, complaining that they have been the targets of “constant attacks.”

The dialogue was taking place in the Mesa Nacional de Garantías (National Roundtable on Guarantees), set up in April 2009 to provide protection for human rights defenders.

The social organisations withdrew from the Roundtable, complaining that the government failed to take adequate measures to save the life of Ana Fabricia Córdoba, who had received death threats.

“People continue to die – simply for standing up for their rights. This cannot stand,” he said that day in the ceremony in which Colombian President Juan Manuel Santos signed into law the Victims Rights and Land Restitution Bill.

Córdoba, 51, had survived the extermination of the left-wing Patriotic Union (UP) party that emerged in 1985 out of a peace agreement signed with the Revolutionary Armed Forces of Colombia (FARC).

But in 2001, she had to flee her home in northern Colombia to the city of Medellín, where she spoke out loudly against the occupation of poor neighbourhoods starting in 2002 by far-right paramilitary groups led by drug traffickers, and their collusion with the security forces.

Córdoba was shot on a city bus by a lone gunman with a silencer.

“I saw my mother, my father and all my siblings killed,” the activist said in the past. She had lost a total of 11 family members, including two of her children.

She blamed the Medellín police for the 2010 murder of one of her sons. She also accused the police of supporting the local paramilitary structure. For that reason she was opposed to the local police carrying out “risk assessments” as stipulated by the state protection programme.

“They are going to kill me, but what I want is justice,” she used to say. Four months ago the threats intensified.

“What we need is a little courage, not guns,” said Córdoba, urging people to collectively confront the routine persecution faced by activists and social leaders in Colombia, ranging from arbitrary arrests – such as her two-month stint in jail in 2004 – to forced displacement or disappearance.

But Córdoba’s case is only the tip of the iceberg.

So far this year, 18 human rights defenders have been killed in Colombia, according to Reiniciar, an NGO that represents a number of UP victims in a case before the Inter-American Court of Human Rights. And 102 have been murdered in the last four years.

The leaflet containing the threat is signed by self-styled “urban commandos” of “Los Rastrojos”, an armed drug trafficking group made up of former paramilitaries. It declares the UNDP, the Office of the United Nations High Commissioner for Refugees (UNHCR), 17 human rights organisations (including six women’s groups) and 16 specific individuals (four men and 12 women) as “military objectives.”

“We all work with victims, and above all, in the area of protection of women,” Pilar Rueda, the ombudsman’s office delegate for children, young people and women, whose name appears on the list, told IPS.

“In other words, women victims and human rights defenders are increasingly being targeted,” she said, stressing that “our agenda is to get the government to live up to public policies for providing protection.”

Although the leaflet says “we will begin to wipe out each one of them without mercy,” and adds that “we will not allow the policies of our president to be damaged,” Rueda says the people who signed it have nothing to do with Santos.

They are linked, she said, “with local power brokers in key positions and (armed) structures that have not been totally dismantled.” She was referring to the 2003-2006 demobilisation of the AUC (United Self-Defence Forces of Colombia) paramilitary coalition, and the emergence of successor groups like Los Rastrojos.

“What did the authorities do to investigate the past threats? Isn’t it time for the state to review the protection mechanisms for (human rights) defenders?” asked Christian Salazar-Volkmann, OHCHR representative in Colombia, reacting to Córdoba’s murder.

Protection measures for human rights defenders and activists were weakened in May 2010 by then president Álvaro Uribe (2002-2010). The budget for the transportation and relocation of people facing death threats was drastically cut.

In addition, the bodyguard service was put in the hands of a private company, aggravating the mistrust caused by documentary evidence that the government-assigned bodyguards were spying on the people they were supposed to be protecting.

“The Colombian state has not yet made available the results of investigations of murders of human rights defenders and social activists, or of the numerous threats,” says the communiqué that announced the suspension of the Roundtable.

And while the impunity surrounding such crimes continues to grow, many human rights defenders are actually on trial facing unsubstantiated charges.

Vice President Garzón urged the organisations to continue the dialogue with the government.

The ombudsman’s office forms part of the Roundtable. “We are very concerned about the breakdown” of the dialogue, said Rueda. “What is essential is for an investigation to be carried out to determine who sent the death threats,” she said.