KATHMANDU, Jul 4 2011 (IPS) - When Bina Tamang was told that she could earn money by not felling trees in the tiny forest that serves as the source of fuel and fodder for 65 families in her area, the 27-year-old was incredulous. 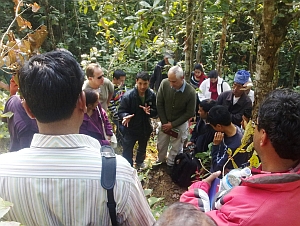 That was two years ago. In June, when Tamang was informed that she and over 100 other groups like hers, that have been sharing forests as community property, had been awarded cash incentives worth 95,000 US dollars disbelief gave way to joy.

“It really works!” says Tamang, who has woken up at 4 am as usual to milk the cows, cook and then get ready to plant vegetables. This is the usual lifestyle for the forest user groups (FUGs) in Dolakha where she lives, a remote northern district close to the Tibetan border and home to indigenous or disadvantaged communities.

“The money will be an incentive for villagers to take better care of their forests,” she said. “We will use our share to augment our revolving fund, meant for assisting the neediest members.”

Tamang is the former secretary of the Palung women’s community forest in Dolakha. Just eight hectares, Palung forest cannot even provide the 65 families wood for such basics as windows. Still, it is unique because all the users, including the 11-member committee that controls the revolving fund, are women. “We cut the grass that grows in the forest for fodder and collect fallen or dead branches,” says Tamang. “Grazing livestock inside the forest is prohibited. So is logging. One member was fined seven dollars for cutting a tree.”

Now 105 FUGs in three districts – Dolakha and Gorkha in the west, and Chitwan in the south – are celebrating the fact that they have made money grow on trees.

The story began in 2003 when the Netherlands government funded research into how communities living on forest produce can be taught to conserve them so that the trees can absorb carbon dioxide released on burning bio-fuels. The research was conducted with regional partners in East Africa, West Africa, Papua New Guinea and the Himalayan region.

The International Centre for Integrated Mountain Development (ICIMOD), the partner in the Himalayan region, undertook the research in India and Nepal and in 2008, at the climate change talks in Poznan, Poland, proposed that a “Forest Carbon Trust Fund” be established for a pilot project in Nepal – Reducing Emissions from Deforestation and Forest Degradation Plus (REDD+).

Communities in Nepal are getting involved with forest conservation projects. credit: Fidel-Márquez-IPS

“The Norwegian Agency for Development Cooperation gave seed money of 100,000 dollars for the fund,” said Bhaskar Singh Karky, resource economist at ICIMOD. “We call it the carrot and sermon policy,” Karky added. “Timber is valued more than standing forests and the fund seeks to change that perception. The message to the forest users is that if you cut down a forest, we can’t penalise you but then you don’t get carbon money either.”

This is the first time that carbon money has been paid in Nepal.

“We have to see now if the carbon money is a greater incentive than the value of felled timber,” said Karky. “We plan to take the concept to the market and ask international investors to invest as part of boosting their corporate social responsibility image.”

Besides contributing to the conservation of forests the money also comes as a shot in the arm for women who form more than 51 percent of Nepal’s 29 million population. According to the Federation of Community Forestry Users, Nepal (FECOFUN), over 50 percent of the members of the15,000-odd FUGs are women. Also, the committees governing the groups must have a woman either as president or secretary.

“The three districts were chosen partly in recognition of their conservation work and partly for the inclusion of women, Dalits (formerly untouchable Hindu caste), indigenous communities and other disadvantaged groups,” said Sita Chettri, FECOFUN’s project coordinator in Dolakha. FECOFUN as well as the Asia Network for Sustainable Agriculture and Bio-resources have been ICIMOD’s local implementing partners for the carbon project.

“We first heard about the incentive money to protect the forests two years ago. None of us quite believed that people would be paid for not cutting trees. Now the FUGs have cash they can use for a livelihood,” Chettri said. Though the carbon money, after being distributed among all the stakeholders, may seem meagre, in Nepal, one of the poorest countries in the world, it is considerable.

“Our revolving fund had only 21dollars and the money was lent to a disadvantaged member so that she could buy a goat,” said Chettri. “There are 19 such women in the group and the carbon money will mean faster succour for them.”