SEATTLE, U.S., Aug 2 2011 (IPS) - Jean Ronel Noël, a young Haitian engineer, stood in a centuries-old fort on a small island just off Dakar and looked out at the Atlantic through a portal that once led enslaved Africans to the ships of the Middle Passage. 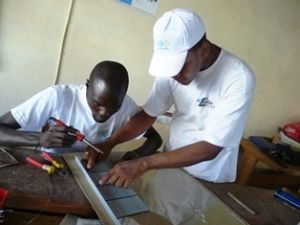 “Finally we come to ‘the door of the voyage of no return’,” he wrote in a blog. “My blood wouldn’t stop boiling, wave after wave of gooseflesh. I nearly broke down. So it’s through that door that my ancestors passed. The Door of Hell! There are two infinite things, Einstein said: the universe and human stupidity.”

Noël, though, had come to Senegal looking forward more than backward. He brought with him some technological keys that he believes can unlock the doors of a rich storehouse of renewable energy, and ultimately a more durable and self-sufficient model of development for Haiti and other poor countries.

A Senegalese firm specialising in solar-power installations, KAYER, had invited Noël and technician Frantz Derosier to visit the westernmost nation of West Africa to teach their employees how to fabricate their own photovoltaic (PV) panels, which convert sunlight into electricity.

Noël is co-founder, along with his partner Alex Georges, of ENERSA – Énergies Renouvelables, S.A. (Renewable Energies, Inc.). Derosier is one of their 20-odd employees. ENERSA manufactures solar streetlamps and other solar-energy equipment using PV panels that they build from scratch. They count around a thousand such lights installed in over 50 municipalities all over Haiti.

After the catastrophic earthquake of Jan. 12, 2010, which knocked out electrical power across the Port-au-Prince area, these lamps were the only public light sources for some localities. The temblor also destroyed much of ENERSA’s physical plant, but all the employees survived and the firm was able to restart production within a few months.

During the nine days Noël and Derosier were in Senegal, a former French colony like Haiti, they conducted a week of training sessions with KAYER in the headquarters of a peasant farmers’ confederation in the town of Mekhe, about 100 kilometres inland from Dakar, the capital.

The sessions resulted in the first solar panels “made in Senegal”. The ongoing collaboration, according to ENERSA, will cover the conception and manufacturing in Senegal of solar products, including solar streetlights.

The project was made possible by the collaboration of a French non- governmental organisation, Solidarité Internationale pour le Développement et l’Investissement (International Solidarity for Development and Investment), which provides financial support to microfinance institutions in developing countries, and the École Polytechnique Féminine (Engineering School for Women) in Paris.

On their return trip, the Haitians stopped in Paris to meet with French solar energy specialists and engineering students at these organizations, and to submit for testing two of the photovoltaic panels they had made with their Senegalese counterparts.

Noël called the trip a successful experience of South-South cooperation. He wrote in an e-mail: “Senegal has a potential market like Haiti – there are a lot of rural communities. Enersa and KAYER will set up a partnership to work on projects in Senegal.”

While Noël found a lot of other things in common between Senegal and Haiti as well, he said the Senegalese have a stronger sense of citizenship.

During their stay, the Haitians met a Haitian-Canadian entrepreneur living in Senegal who also wants to make photovoltaic panels there. Noël says they hope to pursue that relationship as well.

In some respects, the voyage to Senegal had a different significance for each of the two Haitians. Noël was already a seasoned traveller. After high school in Haiti, he and his friend Georges left for Canada to study engineering and business at the École Polytechnique Montréal, an engineering school.

When they graduated, they decided to return to Haiti to give something back to their country by starting a social enterprise that could employ Haitians to produce something useful. After taking a workshop in building PV panels from Dr. Richard Komp, a retired professor from Maine, they settled on manufacturing solar-energy equipment.

For the younger Derosier, the flight to Dakar via Paris was his first ascent in an airplane. Noël blogged that Derosier was amazingly calm even in the turbulence of a tropical storm they encountered just after takeoff.

Derosier and nearly all the other ENERSA employees are young men from Cité Soleil, the biggest bidonville (shantytown) in Haiti’s capital, Port-au-Prince, where jobs are prized rarities. ENERSA trained them for several weeks in electronics and metal fabrication skills, and pays them wages well above the going rate in Haiti, where the majority tries to survive on a dollar or two a day.

For both Haitians, however, the trip to Senegal was a sentimental journey to reconnect in a productive way with a continent that looms large in the consciousness of their people.

Historically, for Africans who were kidnapped into slavery and taken to what was then the French colony of Saint-Domingue in the 1600s and 1700s, Guinée (their name for West Africa) represented a spiritual homeland to which some believed they would return after death by voyaging under the sea.

The Haitian Revolution defeated Napoleon’s generals and threw out the French colonisers in 1804, giving birth to the first independent nation in Latin America and the first republic in the world created by self-liberated African slaves. Many still spoke African languages, parts of which were amalgamated with French and other languages into Kreyol, the lingua franca spoken throughout Haiti.

African religions survived in vodou, which is still practiced by many Haitians. Listening to the drumming and watching the dancing of a Christian service in the countryside, nobody could doubt that Haitians have preserved strong ties with the mother continent.

The visit to the fort on Île de Gorée was an experience Noël said he would recommend to all people of African descent in the Americas. “To see the ‘house of slaves’ is something special, to travel through history. My ancestors were there hundreds of years ago.”