KURMUK, Sudan, Oct 20 2011 (IPS) - Hawa Jundi sat on the ground outside a makeshift shelter where she and her family now live. A violent storm was moving in and lightning streaked toward the earth as the wind began blowing hard against the tarpaulin tied to a frame of sticks. 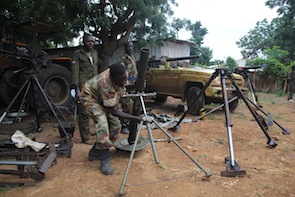 Already a humanitarian crisis, the situation is likely to worsen as food supplies dwindle. Jundi said her family eats one meal a day by foraging for wild plants and scavenging sorghum from abandoned farms.

She and her family left their village of Sally, in Blue Nile state, after it was attacked by an Antonov bomber, sent by the government of Sudan. But even here, she has not found safety.

Earlier that day, she said, she was almost hit by a piece of shrapnel from a bomb dropped in a riverbed nearby, where she and other villagers were searching for granules of gold to sell and buy food.

“I don’t know why the Antonov came and bombed us, but we left our village and came here,” she said. “And after we came here, we found that the Antonov is coming also to this place.”

The rebel Sudan Peoples’ Liberation Movement-North (SPLM-N) says Sudan is waging a war of terror from above against civilians.

In an interview in his bush camp near the rebel stronghold of Kurmuk, Agar told IPS as many as 600,000 people may have fled their homes.

The number of displaced people is impossible to verify. Aid agencies have pulled out since the conflict began in early September, and human rights groups have been unable to access the area.

On Sept. 13, the United Nations News Service said about 100,000 people had already fled their villages, but U.N. officials in Khartoum declined to give current estimates.

The Sudanese government denies it is attacking civilians deliberately. Officials have said the raids are aimed at military targets only.

Rights groups have accused Khartoum of bombing civilians in Darfur states as well as South Kordofan, which borders Blue Nile and where the SPLM-N is also battling government forces.

In Blue Nile, Sudan’s air force is using Antonov bombers, which were built by the Soviets in 1968 and are notoriously inaccurate. Whether Khartoum intended it or not, it is clear that civilians have become victims.

In the village of Maiyes, about 20 kilometres from the front line, villagers said an entire family of six was killed when a bomb fell on their hut a week before. Churned up earth around a waste-deep crater was all that remained of the family home. Scattered around the site were pieces of twisted shrapnel and household items, including a single small child’s shoe.

“One of (the victims) was pregnant and it cut her stomach,” said Heder Abusita, the village chief. “Rueana Murdis also was killed here with her small child. And also there is Bushara. He died here in this house. His feet were cut, and his stomach also was cut.”

Villagers are unlikely to receive medical attention if they are injured. Maiyes is about three hours away, down punishing dirt roads, from the only hospital in rebel-held territory.

Evan Atar is the only doctor in the rebel stronghold of Kurmuk town, and he said the hospital here is quickly running out of supplies. He added that the hospital has a policy of treating anyone – government soldiers, rebels, or civilians.

In one room in the Kurmuk hospital, nurses dressed the wound of an SPLM-N fighter. As he lay writhing on a gurney, he emitted an eerie howl.

Atar said the soldier had just arrived from the front after being shot through the leg, and he had been dosed with Ketamine, a drug that causes hallucinations.

“At the beginning, we give full anesthesia where he sleeps completely,” said Atar. “But now when it comes to dressing we can’t continue giving the full anesthesia all the time, so we give something that makes him feel there is no pain.”

In another ward, an elderly man, Alton Osman, lay on a bed with bandages on his thigh and arm. He had narrowly avoided having the arm amputated, Atar said. Osman had been hit by shrapnel from a bomb, but luckily he had been found by SPLM-N soldiers who drove him to the hospital.

Agar has called on the international community to pressure Khartoum to stop bombing civilians and to create a “humanitarian corridor” that would allow non-governmental organisations to bring food and medicine to displaced people.

The bombing raids have driven humanitarian groups out of the area. On the first trip by journalists into rebel-controlled territory on Oct. 6 to 8, reporters saw abandoned compounds formerly occupied by NGOs and U.N. agencies, including the World Food Programme.

With food supplies dwindling, more and more refugees are expected to flee Blue Nile into neighbouring countries. Already, the U.N. says, 30,000 people are in camps across the border in Ethiopia.

The humanitarian crisis in Blue Nile could be the first sign of a nationwide catastrophe.

International Crisis Group (ICG), a Brussels-based think tank, on Sep. 26 warned that the conflict between the SPLM- N and the government threatens to plunge the entire country into civil war. In a statement ICG said hardliners within Sudan’s President Omar al-Bashir’s ruling National Congress Party advocate a military response to rebel groups, rather than negotiation.

“This, however, is pushing Sudan’s disparate rebel movements and opposition forces together and could trigger a civil war for control of the country,” the group said.