WASHINGTON, Nov 7 2011 (IPS) - On a small stage, a woman appears, grief written on her face as she wanders through the streets of Kabul, searching for her missing child. Suddenly, she stops by a scene of ruins and stares. 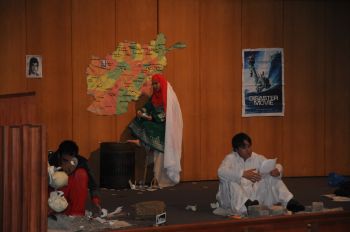 “This wall should not be rebuilt,” Butimar-e Kabul says. “Otherwise, people will forget the pains and I will be left alone.”

The story of the fictional character named Butimar-e Kabul is unfortunately not unique. In the 30 years of conflict throughout the country, Afghanistan’s victims of war have amassed tragedy and struggle, and – despite the odds – hope.

In “Infinite Incompleteness”, the tale of Butimar-e Kabul is interwoven with nine other stories of the victims of Afghanistan’s 30-year conflict. It was presented by the Afghan Human Rights and Democracy Organisation (AHRDO) in the first-ever U.S. performance held Saturday at the American University’s Kay Spiritual Life Center in Washington.

AHRDO, an Afghan-based civil society organisation using theatre and the arts to present transitional justice and gender platforms, has been developing the piece since the organisation’s inception in 2009.

Transitional justice, or the idea of redressing human rights violations following conflict, can be a controversial issue, and one that is difficult to execute. In Afghanistan, the documentation and accountability for human rights abuses has fallen off the agenda internally, and had little push from the international community, said AHRDO’s co-founder and current director Hadi Marifat.

“The immediate focus is on security and stability, but the judicial system is not working here,” Marifat told IPS. Thus, he said, the role of citizens in organising a collective movement to not only address human rights violations, but to move on from them, is extensive.

A crucial component of transitional justice is giving voice to victims – and was the inspiration for AHRDO. Through participatory theatre, says Marifat, they are not only able to engage with victims, but help to portray the broader issues at play.

“It’s not possible to do everything, to show everything that has happened in Afghanistan from the 1970s to now,” he told IPS.

Marifat said that they want the audience, whether in Afghanistan or globally, to understand that it is possible for the atrocities of war to happen again. “(We can) put it in a simple language, and the message at its core is to stop the return of these kinds of tragedy.”

To gather these stories and create a thematic production, AHRDO engaged victims’ groups through five intensive theatre training projects in different regions throughout the country, with the goal of creating an environment of trust, where their personal stories could be told.

Sayed Mohammad Jawid, an executive member of AHRDO and who plays the “Man in Green”, said that there was a strong sense of responsibility on the part of the actors and activists working to tell these stories, because, in many cases, this was the first time that stories from these individuals had been collected, or told at all.

“This was a new methodology working with victims on the grassroots level,” Jawid told IPS. “As an Afghan and a human being, it was shocking for me to hear these things from them. It was the only thing we could do (to) make a strong play to reflect the emotion.”

AHRDO used different types of participatory theatre genres in their programmes throughout the country, most prominently, Playback Theatre, and more than 150 games and exercises to engage victims, who represented a cross-section of ethnic and social groups in Afghanistan.

“When they first come and interact with one another, there’s the feeling at the beginning of ‘you’re less victimised, I’m more victimised,'” Marifat told IPS. “But at the end, there’s a consensus – we’re all victims, and we have to collectively work to address that wrong.”

AHRDO worked extensively with the Afghanistan division of the International Center for Transitional Justice (ICTJ), and to facilitate its U.S. performances in Washington and New York City, with the Open Society Foundations, to bring the issues of Afghanistan’s transitional justice to the international arena.

“What this process does is give you another way of thinking about the problem,” Nadia Siddiqui of ICTJ’s Afghanistan team told IPS about the mission and structure of AHRDO’s participatory theatre. “It makes you realise that you have a shared experience with someone that you thought you never did.”

In a panel discussion following the performance at American University on Saturday evening, it was revealed that the actors presenting the play were not, in fact, actors at all – they are Afghan citizens, AHRDO workers, human rights activists, and victims themselves.

Zahra Hussaini, who plays the role of Butimar-e Kabul, came as a participant at one of the AHRDO workshops in Afghanistan, asked to attend by her employer at the time. She gradually overcame an initial timidity of telling her story through the workshop’s atmosphere of “nothing is wrong, and nothing is right.”

“The respect within these workshops, it trickles throughout life,” Hussaini, who is now an executive member of AHRDO, told IPS. She said that she was like other participants, who valued the safe space of respect for whatever was said, or felt. “It’s a positive way to change the whole society.”

“Transitional justice is a long process,” Mohammad Zaman Khoshnam, who played the “Man in White”, told IPS. “But it can bring changes from the bottom to the top.”