RIO DE JANEIRO, Nov 4 2011 (IPS) - News that the government of South Africa was inspired by Brazil’s health system in setting up its own universal coverage scheme might meet with scepticism in this South American country. 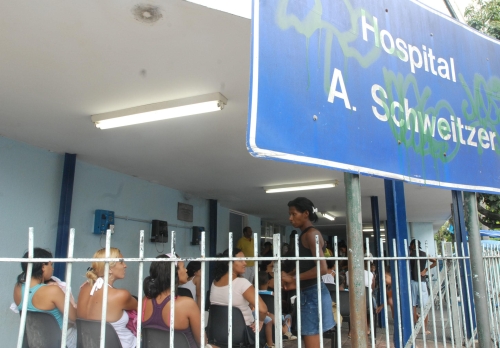 Sociologist Walkiria Dutra de Oliveira was one of the many Brazilians who had a negative opinion of the country’s public healthcare system. But she was in for a surprise when she visited a public health clinic in a middle-class neighbourhood in São Paulo.

Oliveira, who had been diagnosed with diabetes eight years earlier and was facing financial problems, decided to seek free insulin from the public health system.

The “prompt, efficient” attention she was given completely changed the image she had of the Sistema Único de Saúde or Single Health System (SUS), which was shaped during the 1980s when the system was restructured to make healthcare a universal right.

Besides insulin, Oliveira was given free medication for her hypothyroidism, she told IPS.

But "the outcomes are poor; if you look at maternal mortality, child mortality, overall life expectancy and the prevalence of HIV, we realise that we are moving backwards actually," he added.

While maternal mortality dropped by one-quarter since 1990 in sub-Saharan Africa as a whole, the rate has increased fourfold in South Africa, the continent's most advanced economy: from 150 deaths per 100,000 live births to 625, according to the country's Millennium Development Goals progress report 2010.

"What we call health insurance covers only 16 percent of the population in South Africa," he added.

The idea to create a national health insurance scheme, he said, is currently at the stage of a "green paper" approved by the cabinet and released for public debate. The first five years of a 14-year programme would be focused on improving the healthcare system, he said.

New taxes or contributions by workers are some of the possible financing mechanisms under study, but Motsoaledi did not discuss the issue in detail. South Africa is also looking at healthcare financing systems in Thailand, Britain and the Netherlands.

"South Africa is one of the most unequal societies in the world," the minister said. "One of the things we have done is to try to make healthcare more equal."


Reports of patients dying because of a lack of hospital beds, months-long waits for surgery, serious medical errors, malpractice cases and corruption scandals gave the system a terrible reputation.

But Dr. Nivaldo Gomes, who has worked in public hospitals and clinics since the 1970s, told IPS that “although there have been some problems in implementation, the idea is excellent and legitimate.”

The government is fighting a battle in parliament to create new sources of financing for the SUS, but in Gomes’ view, “the problems are due to political and administrative issues, not a shortage of money.”

There is a lack of political will to fully implement the principles underlying the SUS, said Gomes and his colleague, Dr. Dilene do Nascimento, a researcher at the Oswaldo Cruz Foundation (FIOCRUZ), Brazil’s leading biomedical research institute.

Despite the tragedies caused by medical mistakes and malpractice, the overcrowded hospitals, and the frequent complaints about the system, the SUS has improved health coverage in this country of 192 million people, Nascimento said.

The SUS made it possible to provide everyone with healthcare, while reducing the chaos in the health sector, which was governed in the past by piecemeal policies, she said.

The aim, said Gomes, was to coordinate three levels of public administration – municipal, state and national – that “did not communicate in the past, in the health sector.”

In addition, the SUS was to create a tiered health system with a broad network of primary healthcare clinics at the neighbourhood level and in poor areas on the outskirts of cities, which would refer more serious cases to hospitals and specialist clinics.

The primary health clinics were to relieve the overburdened hospitals.

The new system is based on the concept of democratising health as “a right of all and a duty of the state,” which was incorporated in the 1988 constitution, Nascimento said.

Corruption, aggravated by insufficient inspections, has contributed to the poor execution of the SUS, which is, however, a “universal, tiered, decentralised system with social oversight that can be successfully replicated in any country,” she added.

Primary healthcare system to be adopted in South Africa

The authorities in South Africa want to “borrow” from the SUS primary healthcare system, which “is excellent, far more advanced than us, much more equitable and much more focused on prevention,” South Africa’s minister of health, Pakishe Aaron Motsoaledi, told IPS.

He said the South African government was also interested in replicating Brazil’s network of breast milk banks, which collect and distribute donated breast milk to newborn babies whose mothers cannot supply the milk to meet their needs.

The minister, interviewed during the World Conference on Social Determinants of Health, held Oct. 19-21 in Brazil, also said “we want to eliminate, and not just treat, malaria, and with HIV/AIDS we have got to universalise treatment, just like in Brazil.”

The two governments are drafting a memorandum of understanding for cooperation in health, to be signed in February 2012.

In Brazil, the lack of health education means people with simple flu symptoms or small injuries continue to go to the large hospitals, which should ideally only receive serious cases referred by the network of primary healthcare givers or by clinics and smaller hospitals.

The SUS was the result of broad debates led in the 1970s and 1980s by specialists in public and collective health, and the new plan awakened “great enthusiasm” in the medical community, Gomes said.

At the time, social security financing of public health was failing, and the system favoured formal sector employment, in a country where a large proportion of the workforce is active in the informal economy.

But the middle and upper classes have opted for private health plans and health insurance providers, Nascimento said.

The private providers are costly, and their political weight undermines the SUS, she said. Moreover, the people who can afford private healthcare still turn to the public system when they need more expensive or complex surgeries or treatment, she added.

That happened, for example, during the HIV/AIDS epidemic in the mid-1980s – although Brazil adopted a policy of making free anti-retroviral drugs universally available because the country’s pharmaceutical industry was interested, Nascimento said.

But the system’s response to the AIDS epidemic was a SUS success story that should be repeated in the case of other diseases, she added.

In order for the system to function more effectively, the primary health network, admired by Minister Motsoaledi, must be expanded, with more clinics and family doctors.

The SUS functions well in smaller towns and cities, where municipal governments make sure it operates properly, said Nascimento.

She said she saw this in the years she worked in São José dos Campos in the southern state of São Paulo, when it was still a medium-sized city.

The problems caused by the shortages of hospitals in Rio de Janeiro, which used to have an excellent network of hospitals, are explained by the influx of patients from the rest of the metropolitan region of 12 million people, Gomes said.

The collapse of the city’s hospital network was predicted 30 years ago, due to pressure from the growing population, if smaller hospitals were not built in Rio’s suburbs and satellite cities, he said.

And that is just what happened, Gomes said, adding that proper implementation of the SUS along its guiding principles would put an end to the problem.

* With reporting by Fabíola Ortiz.