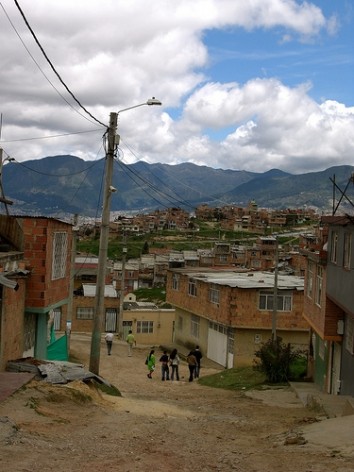 BOGOTA, Nov 30 2011 (IPS) - A teenage love story is the fictional plot device in a new Colombian film, Silence in Paradise, about the all-too-real phenomenon of the “false positives” – the euphemism used to describe army killings of young civilians passed off as guerrilla casualties. 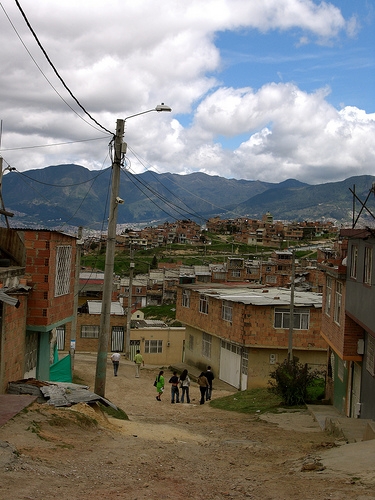 The film directed by Colbert García depicts the “body count” system used by the military to show results in Colombia’s counterinsurgency war, in which members of the armed forces were offered incentives like weekend passes, cash bonuses, promotions and trips abroad for killing insurgents.

The film premiered in Colombia on Nov. 25. But on Nov. 19 there was a pre-premiere in Bogotá before a military audience – who were not pleased with the film.

The film is set in the shantytown of El Paraíso (Paradise) in the hills on the south side of Bogotá, where armed bands charge shopkeepers and transport workers “protection money” in exchange for leaving them alone.

El Paraíso is one of the neighbourhoods in the vast working-class district of Ciudad Bolívar, where some 400,000 people displaced by the armed conflict live in poverty, with a spectacular view of the capital down below as their only luxury.

Esmeralda Pinzón, the actress who plays the complex role of Susana – one of the links in the “false positives” business – actually used to live in El Paraíso. Forced to leave her home at the age of 10 after her father was murdered, she and her mother settled in the neighbourhood like so many other people fleeing the violence in different regions around the country, she told the web site ConfidencialColombia.com.

The film deals carefully with a touchy subject: the recruitment of mainly poor young men, who are killed and tallied up as combat casualties. They are offered a few days of work outside the city – and are never heard from again. After they are taken away, they are forced to put on camouflage fatigues like the ones worn by leftist insurgents, and are shot by members of the security forces.

There is no movie yet about what happens after that: the drafting of the legal documents showing that they were guerrillas killed in combat, which will be reviewed by the military justice system and are thus drawn up in a language perfectly adapted to the requirements of the country’s criminal code or international humanitarian law (IHL).

The formalities include photos of the corpses, fake autopsies and even statements from witnesses who took part in the purported firefights.

Rank-and-file soldiers, noncommissioned officers and officers give declarations, closely following the script of the orders for staging nonexistent military operations that comply with the rules of combat under IHL and national forensic standards for handling corpses.

In other words, “they aren’t unaware of (the standards) and the noncommissioned officers themselves know how to use the terminology of IHL. The orders given to the battalions for the operations are impeccably written. The people who draft them are closely familiar with IHL,” said Jesuit priest Javier Giraldo, the director of the human rights and political violence databank of the Centre for Popular Research and Education (CINEP).

“Maybe what that knowledge really does is help them to see how to get around those standards in practice,” he added.

Everything is done in such a way that the justice system ends up concluding that the bodies are really those of people killed in combat.

But when Judge Alexander Cortés, a retired army captain, reported signs of fraud in a number of the cases, he ended up in exile.

In 2007 and 2008, he was a military judge for army Brigade 17 in Carepa, a town in the banana-growing region of Urabá in the northwestern province of Antioquia. In compliance with a rule requiring that the military courts verify whether the casualties actually occurred in combat, Cortés reviewed a large number of cases.

After reviewing 55 and finding abundant signs of fraud, he referred the cases from the military justice system to the civilian courts.

The cost he paid was persecution from high-ups in the army.

Cortés did have the support of Luz Marina Gil, who was director of the military justice system at the time. But she was later sacked.

The case of Judge Cortés is in the appendices of the report “23 years of false positives (1988-2011)”, which the CINEP databank happened to present in Bogotá the same week that Silence in Paradise premiered.

The study covers 951 cases from 28 of the country’s 32 departments or provinces, involving 1,741 victims. Of that total, 40 percent of the killings occurred in 2007, when President Juan Manuel Santos was defence minister for then President Álvaro Uribe (2002-2010).

To what extent was the current president of Colombia responsible for this phenomenon? “It’s a paradox: the largest number of cases was reported when Santos was defence minister, but at the same time, the number of cases started going down,” the director of CINEP, Catholic priest Mauricio García, told IPS. “The statistics attest to that.”

The number of cases plunged between 2007 and 2009, as heads rolled and measures were adopted after the “false positives” scandal broke in 2008.

Although human rights organisations had been reporting the phenomenon for over two decades, the story was first covered by the press in September that year, when a human rights official in Soacha, another sprawling shantytown southwest of Bogotá, denounced that the bodies of young men who went missing from the neighbourhood in January of that year had appeared in a morgue in northeastern Colombia.

The scandal had international repercussions, and as a result of pressure from donor countries, the number of extrajudicial killings started to go down.

The army killings had become more and more widespread since 2002, when Uribe took office. His administration officially implemented a system of promotions and awards for members of the military, depending on the number of “guerrillas” killed.

“Additional measures are needed if they really want to put an end to this practice which clearly undermines the legitimacy of the institutions,” García said.

The investigation by the attorney general’s office has covered a larger number of cases, around 2,500, in which 3,800 members of the military are implicated. But it only provides numbers, not names.

The CINEP databank refuses to reduce the victims to mere numbers. For that reason, 196 of the 327 pages of the report contain brief paragraphs giving dates, names, places and information about what happened in each case.

But the CINEP study does not list the local, regional or national commanders under whose leadership the crimes occurred.