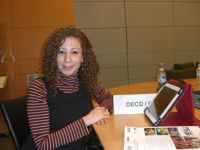 Government representatives meeting in Paris ahead of the forum say major components of a new agreement will include greater transparency, accountability, gender equality and attention to climate change.

The forum will bring together some 2,500 delegates from around the world, including heads of state, ministers, senior officials and high-level representatives from donor and aid-recipient countries, according to the organisers. Members of civil-society groups, chiefs of multilateral organisations, and parliamentarians will also be present.

“We need development cooperation to be more transparent so we’re more able to promote the principle of accountability. If there is transparency, we can hold each other accountable on what we’re doing to have results on the ground,” said Ronald Nkusi, director the External Finance Unit in Rwanda’s Ministry of Finance and Economic Planning.

In an interview at the Paris-based Organisation for Economic Co-operation and Development (OECD), which organises the forum, Nkusi told IPS that transparency has to come from both sides, donors and aid recipients.

“Donors need to be transparent about what they’re providing and how that money is to be spent,” he said. “Partner countries or aid recipient countries must also be transparent on how they use the resources and what the results are. At the end of the day, we need to see results.”

African countries and others that receive aid are also trying to reach agreement with donors on the “issue of tying aid”, Nkusi said.

“As partner countries, we’re insisting that aid has to be untied. If you don’t untie, that means our own companies cannot compete for those resources,” he told IPS.

Several donors have strings attached to the aid they give. For instance, they may require that companies from their own countries be given contracts for such activities as constructing roads. This has long been a sore point in development cooperation, aid experts say.

“We find it’s really expensive and there is no value for money,” Nkusi said. “For donors that don’t untie aid, the money does not really make way to the recipient countries. If we need to make a new development cooperation paradigm, we find that it’s really important to change the way things have been done.”

Nkusi and the delegates of 17 other countries (representing various regions) were holding their last meeting in Paris this week before heading to Busan with their ministers. The delegates said that some areas of disagreement remained but that they had made “remarkable” progress.

“All of us sitting around the table, representing different constituencies, different contexts, different situations, we’ve all acted as representatives who want to go forward,” said Lidia Fromm Cea, director general for cooperation in Honduras’s Ministry of Planning and Cooperation.

“In some cases, we’ve made concessions mainly on the side of partner countries,” she told IPS. “There is a common will among all of us to achieve results that we can all live with and that can guide our future actions, starting post-Busan and onwards.”

She said that “stakeholders agreed that mutual accountability should be one of the principles of aid effectiveness” but the real question was how to make that operational.

Honduras and other countries would like to develop a common standard on aid information, she said. Some development partners, however, “do not really know how flexible this standard would be.”

Delegates here also said that the Busan outcome document would be based on human rights, with a push for gender equality as a principle of aid effectiveness. The final document to be taken to Busan expressly mentions gender, empowerment and equality, they said.

For many countries, such as the Latin American and Caribbean countries that Honduras has been representing in Paris, climate change is an important issue, and they want to see that included in the final Busan agreement.

“We’re all keeping a keen eye, and making sure that climate change financing is not delivered out of the aid effectiveness principle,” Fromm Cea told IPS. “One of our recommendations is that the text mentions the rising sea level, which is eating up land that communities have. This is a very critical issue.”

OECD experts say that evidence-based discussions at the HLF-4 will identify where commitments to aid effectiveness have failed to be fully implemented, while focusing on how aid can work best for development.

The forum follows previous meetings in Rome in 2002, Paris in 2005 and Accra, Ghana in 2008. The OECD says that the action plans resulting from these earlier meetings were a response to the international realisation that increasing the volume of aid was not enough. But it says that change has been happening much too slowly.

“The delivery and quality of aid need to be improved to achieve long-term, enduring development results,” the organisation says.

It adds that that the Busan talks will not only be about aid but will have a highly political agenda that also addresses the “challenge of using all resources for development more effectively.”

“We need to come out of Busan with a common position so that we can tell the world there is a new development paradigm that’s going to work,” said Nkusi of Rwanda.