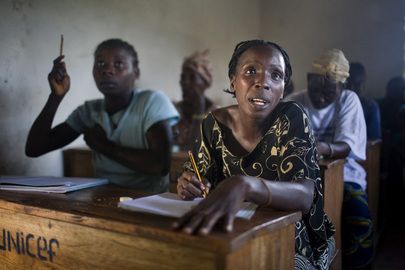 Speaking at the three-day World Innovation Summit for Education (WISE) in Qatar early November, Brown made a strong case for the creation of a Global Fund for Education “in the same way that we have a global fund for health, that has made enormous advances in TB, HIV Aids, vaccinations, and, of course, in polio and malaria”.

The proposal by Brown, a former British chancellor of the exchequer, has been gathering momentum at a time when the United Nations complains of a growing crisis in the educational sector – a shortage of over 6.1 million teachers in a world inhabited by nearly 800 million illiterate people, nearly two-thirds of them women.

Allan E. Goodman, president and chief executive officer of the New York-based Institute of International Education (IIE), who strongly supports the proposal for a global fund, told IPS: “It is a new idea and one that promises to leverage private as well as public funds.”

Without it, he warned, the U.N.’s Millennium Development Goals – including a call for universal primary education by 2015 – are unlikely to be reached by the deadline.

“Improving education needs to be a priority for governments and such a fund would signal that indeed it is,” said Goodman, whose Institute was one of the co-sponsors of the Qatar summit, along with the U.N. Educational, Scientific and Cultural Organisation (UNESCO).

Dr Abdulla bin Ali Al-Thani, chairman of WISE, told IPS the former UK prime minister’s proposal for the creation of a global fund for education is evidence that leaders are hearing the WISE call to raise the status of education on the political agenda.

He pointed out that WISE was established in 2009 as a platform for debate on how education can be equipped to better serve future needs and as a launch pad for practical actions.

“I hope other leaders will contribute to the discussion so that we might find and implement practical solutions to one of the most pressing issues of our time,” he added.

Meanwhile, the statistics coming out of the educational sector are bleak: widening gender disparities in classrooms; woeful lack of schools in urban and rural areas in Asia and Africa; and a shortage of funding to meet the growing needs of education worldwide.

Brown argued there is an urgent need for a massive infusion of funds into the educational sector.

“We must hold national governments to their promises to provide the funding both in development aid, and of course, the funding that individual developing countries’ governments have promised for education in their own areas,” he said.

And where countries fall behind, he said, “We should be telling them this is not acceptable because it is not simply about them and their generation; it is about future generations. But we should do more.”

“In my view, we should now create a global fund for education,” he said, which would allow people in the private sector and the public sector, philanthropists and people in charities, private companies to affiliate and make possible a focus for momentum to meet the U.N.’s MDGs by 2015, including universal primary education.

Since its creation in 2002, the Global Fund to fight diseases has become the main financier of programmes to fight AIDS, TB and malaria, with approved funding of 22.4 billion dollars for more than 1,000 programmes in 150 countries as of June 2011.

The proposal for a similar fund for education also comes at a time when the United States is threatening to cut all funding to the Paris- based UNESCO, one of whose primary mandates is the achievement of “education for all.”

The funding cut has been prompted by the admission of Palestine as a member of UNESCO much against the wishes of the United States.

UNESCO’s Assistant Director-General for Education Qian Tang told IPS there are less than four years to go until 2015, the target date set by the international community for achieving “education for all”.

“UNESCO is very encouraged by this tendency. But it is not enough: ensuring that all children participate in basic education alone will require the injection of an additional 16 billion dollars,” Tang said.

“And we must not forget the many other levels and types of education that are critical to sustainable and equitable development: early childhood care and education, secondary schooling, higher education and training for the world of work, among others.”

He also pointed out that literacy programmes in particular remain under-funded, as 793 million women and men lack basic reading and writing skills.

Yet literacy has the power to transform lives far more than almost any other development action.

With this in mind, UNESCO works with governments to raise awareness of the importance of education and supports them to make good on their commitments, he added.

In early November, UNESCO Director-General Irina Bokova addressed the opening of the first pledging conference of the Global Partnership for Education (GPE), an initiative and fund devoted to making quality education a reality for all children.

The conference, which was held in Copenhagen, Denmark, resulted in 57 significant pledges from donor and developing countries, civil society organisations and the private sector, demonstrating a political commitment to opening up opportunities for quality education.

UNESCO says it will continue to help beneficiary countries to prepare the necessary education plans to qualify for funding under the GPE.

At the same time, the U.N. agency will work with its partners to explore the viability of establishing other means of increasing resources for education, including innovative mechanisms such as debt swaps and micro-donations from bank transactions.