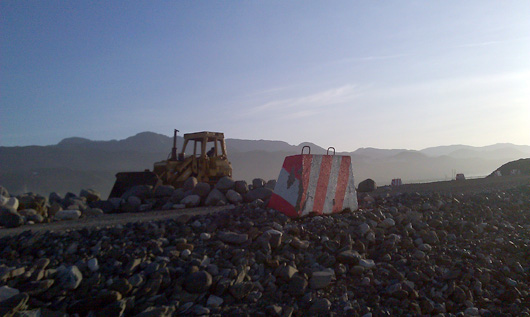 Lobbying group the Jamaica Environment Trust (JET) sought a judicial review of the National Environment and Planning Agency’s (NEPA) decision to permit the construction of a four-lane highway within the Ramsar Wetlands – 13,000 hectares of cays, reefs and mangroves.

At risk, they contended, were more than 300 species of plants and animals, including six native species of cacti.

This work required the removal of centuries-old sand dunes inside the Palisadoes/ Port Royal Wetlands, which scientists say are critical to the environmental and structural integrity of the tombolo.

JET charged that NEPA and the Natural Resources Conservation Authority (NRCA) board had breached local environmental laws when it approved the project without consulting the public on major changes to its original design.

The NRCA Act makes it a necessity for the public to be consulted on all developments requiring environmental permits and licences. The NRCA is lawfully responsible for approval, while NEPA issues such permits and licenses.

The court victory was bittersweet, however, as NEPA, the agency charged with protecting the environment, also claims absolution. In the Oct. 13 ruling, Supreme Court Judge Jennifer Straw wrote that while the Agency breached the legal standard for public consultation, NEPA and NRCA had upheld their responsibility to protect the environment by issuing adequate permits and licences.

In handing down her opinion, Straw noted that NEPA “fell woefully short and breached the legal standard of consultation and the legitimate expectation that all the relevant environmental information would be disclosed to the public before approval was given”.

She continued, “The defendants did not breach their statutory duty in failing to require an environmental permit as conditions were attached to a previous beach licence granted in relation to the sand dunes.”

NEPA’s CEO Peter Knight celebrated the ruling as a vindication of the agency’s commitment to its duties. The agency has repeatedly been accused of failing to adhere to its mandate to protect the environment and for overlooking its legal duties under pressure from government and investors.

“The court rulings, as we understand them, did not challenge our processes, but rather, they concluded that we did not adhere to the processes,” Knight told IPS in a written response. He pointed out that the agency would appeal the ruling in relation to the public consultation.

Environmentalists pointed out, however, that Straw’s ruling highlights a system in which large investors and power players can and do pressure governments and watchdog agencies like NEPA into approving environmentally unsound projects.

“Failure to meet public consultation requirements is a symptom of a much greater problem: the general lack of transparency in development decision-making,” said Wendy Lee, executive director of the Northern Jamaica Conservation Association (NJCA).

This problem “is compounded by a failure to adhere to sustainable land use policies, physical plans where they exist and parish development orders”, she added.

Work to elevate the Palisadoes Road began in August 2010 to “protect the airport and infrastructure inside the Kingston Harbour”, Transport and Works Minister Michael Henry said then.

In recent years, extreme weather events such as Hurricanes Ivan in 2004 and Dean in 2007 have inundated sections, forcing closure of the airport and marooning Port Royal.

But the minister failed to reveal significant new additions to a project that had been approved in 2008. Both the National Works Agency (NWA), which is responsible for the 65-million-dollar project, and NEPA resisted calls for renewed consultations.

Here, Straw sided with the environmentalists.

And although the public consultation did take place, JET’s executive director Diana McCaulay told the local media, “I think it is hard for any reasonable person to say that a public meeting that takes place after permits have been granted and after work has started is a reasonable way to proceed.”

This is the second time that environmentalists have challenged NEPA/NRCA’s public consultation process and won.

In May 2006, Justice Brian Sykes ruled that NEPA and the NRCA had breached the public consultation process when it failed to consider critical information, including a marine ecology report that had been missing from an environmental impact study.

NJCA, JET and other environmentalists had sought judicial review of the decision to grant a permit for the construction of phase one of the 1,918-room Bahia Principe Hotel in Runaway Bay.

Relaying his decision to rescind the permit, Sykes noted, “The difficulty for me was that it was known to both NEPA and NRCA that the (environmental impact assessment) was incomplete. How can you consult without giving the public full, complete and accurate information?”

Having been ‘vindicated’ by this latest ruling, Knight said that NEPA, which he said is driven by acts, regulations, policies, standards and guidelines, is working to improve its performance through increased “efficiency and effectiveness”.

“From a policy perspective we are in process to finalise a number of policies,” he said. “In the short-term we have taken steps to implement changes, which are already positively impacting our capacity. These include the reconfiguration of elements of the organisation structure.”

But even as environmentalists savour their win, there is fear that Jamaican authorities may have lost the meanings of protected and preserved.

“Even when the public consultation process is ostensibly followed, damaging projects still go ahead despite strong objections from the public and environmental experts, and the damage is usually irreversible,” said Lee.