ANKARA, Nov 5 2011 (IPS) - Assurances to women by the winners of the Tunisian elections that they will be free not to wear the Muslim veil has come as music to the ears of Turkish secularists. It was another signpost confirming Turkey’s growing position and influence among Arab countries. 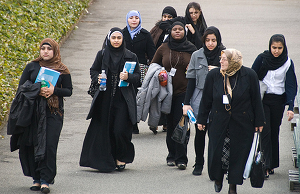 Women wearing the traditional Hijab. Winners of the Tunisian elections assure women that they will be free not to wear the Muslim veil. Credit: Bomoon Lee/IPS

The adoption on Oct. 29 of the policy by Ennahda, the moderate Islamist party with ties to the Muslim Brotherhood, which won the first-ever free elections in Tunisia securing 41.47 percent of the vote, has also cheered up the leadership of the Turkish ruling Justice and Development (AK) Party.

Paradoxical as it may sound, AKP leader and Prime Minister of Turkey Recep Tayyip Erdogan is credited for Ennhada’s laicity facelift. AKP has Islamic roots and its opponents have for the past 12 years predicted that its rise to power would transform the country into an Islamist Republic on the model of Iran.

Nothing of the sort has happened so far, although religious conservatism has progressively been pervading the state and parts of society. But the Arab Spring has given an opportunity to Ankara to change its image in the international arena.

On a week-long trip in early September to Northern Africa, Erdogan became the evangelist of secularism as a model of governance for the nations in the region that just rid themselves of their despots.

This triggered adverse reaction from the Muslim Brotherhood. During a TV show Sep. 13 in Cairo, he rebuffed his critics without hesitation. “To Egyptians who view secularism as removing religion from the state, or as an infidel state, I say you are mistaken. It means respect to all religions,” he said.

Tunisians were also sceptical about the Turkish model at first. But it now seems that the paradigm is attracting supporters, both among Arab liberals and moderate Islamists.

Erdogan, now a household name in the Middle East and Northern Africa (MENA), has concocted a recipe that skilfully blends inclusive democracy, chastising Israel’s policy towards the Palestinian territories, and hope for prosperity.

Turkey’s curtailing of the power of the military in July, breaking long-established diplomatic and defence ties with Israel in May 2010, and the country’s impressive economic growth since AKP came to power in 2002 have played well in the hands of the Turkish PM.

Meanwhile, Turkish foreign-language media and TV sitcoms, propagated from Istanbul to antennas across the Middle East and North America have built the picture of a society that lives as happily and leisurely as any Hollywood-made bourgeois neighbourhood. Turkey has become the benchmark for moderate Muslims.

The current popularity of Turkey in the Arab streets and among the business communities in Cairo, Tunisia, Beirut or Tripoli are the fruit of a long-term strategy that began in 2003, and whose objectives became apparent in 2009 with the appointment of Ahmet Davutoglu to the post of minister of foreign affairs.

Davutoglu, a former political science professor in Istanbul and at the Islamic university of Malaysia, has been a close advisor to Erdogan since 2003. His book ‘Strategic Depth’ published in 2001, in which he argues Turkey’s historic and geographic destiny in a greater MENA extending from the Black Sea and Western Asia to the Atlantic coast of Morocco, has influenced recent Turkish foreign, trade and defence policy.

This new look at the region seems very similar to the ‘Greater Middle East’ term presented by former U.S. president George W. Bush at the G8 meeting in 2004, in the aftermath of the U.S. invasion of Iraq.

Although Davutoglu is today taxed with Neo-Ottomanism, a term he abhors, repositioning Turkey from a marginal power to a world political player of geostrategic importance was already in the mind of the late prime minister and president Turgut Ozal in the 1990s. Ozal initiated the process of Turkey’s application for membership to the EU, which was formalised in 2005 by Erdogan.

Trade has been the main focus of such vision in the past decade. Turkey’s commercial priorities progressively have turned away from the EU and towards MENA.

Business diplomacy has been one of the main instruments used by Ankara. A third of all official trips abroad by the leadership of the government between 2003 and 2010 were to the Middle East, with President Abdulla Gul making 17 visits, Davutoglu 29 and Erdogan 47. Their escort systematically included 50 or more business executives and entrepreneurs.

The Arab Spring is, therefore, giving the jitters to Turkish exporters and contractors. Construction industry associations estimate that, in just Libya, contracts worth 25 billion dollars have been put on hold or scrapped. Most of these were signed by the fallen government or the Gaddafi family.

Days after the resignation of former Egyptian president Hosni Mubarak, major infrastructure contracts in Egypt with Turkish enterprises were suspended or cancelled. Gul’s and Erdogan’s expeditious trips in the summer to Cairo are indicative of the pressure to Ankara by business lobbies.

While Erdogan and Davutoglu appear to have a winning streak in their campaign to win Arab hearts, minds and cheque books, immediate neighbours are spoiling the party. And the domestic climate is poised to change, as the truce between secularists and conservatives will be put to test in the forthcoming debate over the new Constitution, which is supposed to permanently remove the legacy charter, founded on Kemal Ataturk’s doctrine and shaped by subsequent military dictatorships, and replace it with a fully democratic one.