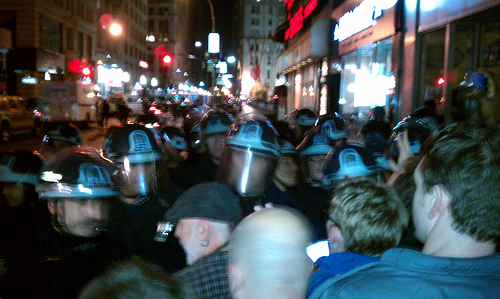 OWS media teams managed to send out alerts via text and email, but by 1:00 a.m. police moved into the park, which had been occupied by protestors since Sep. 17, to clear it out for a “cleaning”.

Police say protestors will be allowed to return, but without any of their equipment, sleeping bags or tents. The move was widely seen by organisers as a permanent eviction.

Reinforcements of protestors arrived by the hundreds to defend the park, but by the time they arrived police had barricaded all of the streets leading to Zuccotti Park, and shut down subways stops nearby. Unable to get in, large groups of protestors massed on street corners, and sometimes in streets, both north and south of the park.

Media crews were not allowed into the park during the raid, and the NYPD prevented news helicopters from entering the airspace over downtown New York. Reports of arrests and violence vary, but both in and around the park police appeared to favour force over arrests.

Pepper spray was widely used on protestors in the park as well as those demonstrating in solidarity on surrounding streets.

“We were on the sidewalk, on public space, standing in solidarity with our sisters and brothers in the park when we were pepper sprayed,” John Cronan, a member of the Restaurant Opportunity Center and an OWS protestor, told IPS.

“We were running half blind down the street, holding each other’s hands, until someone got us to a convenience store where we were able to wash it out,” he said, adding, “It really shows you who’s side the police are on – the side of the one percent.”

Inside the park police manage to move many protestors out without force, while around 100 people remained in what had served as the kitchen area, barricading themselves in. Police eventually broke through and cleared out the remaining activists using pepper spray and batons, and arresting 142 people, including a New York City Councilman. Between 50 and 60 arrests were reported in the surrounding streets.

New York City Mayor Michael Bloomberg defended the police action in a statement on Tuesday morning, saying, “I have become increasingly concerned… that the occupation was coming to pose a health and fire safety hazard to the protestors and to the surrounding community.”

Bloomberg’s rhetorical concern for the health and safety of protestors appeared to stand in stark contrast to the aggressive actions taken by police.

“I was grabbed by the throat and thrown to the ground by an officer,” Amanda Vodola, an organiser with OWS, told IPS.

“They kept shoving me and yelling at me to stop resisting, but I was only trying to get to my feet,” she said. “We are peaceful protestors, but they definitely didn’t treat us like it.”

By 4:00 a.m., some demonstrators remained on street corners near the park, but most streets were filled only with police and the garbage trucks they were using to dispose of OWS equipment. Most protestors had moved to Foley Square, a public park a short distance away, to regroup, where they were joined by a labour solidarity march later that morning.

“We are going to take new space, if they drag us out of one place, we will occupy another, and another,” Cronan told IPS.

But before protestors could make good on that promise, they achieved a surprise legal victory. National Lawyers Guild attorneys, who have defended OWS under the name Liberty Park Legal Working Group (LPLWG), convinced a judge to issue a temporary restraining order against the police and Brookfield Properties, the company that owns Zuccotti Park.

“The occupiers’ right to free speech is based in our most core legal principles and we will be here till the end to fight for those rights,” said LPLWG attorney Gideon Oliver in a statement, after the restraining order was signed.

The order would prevent the city from enforcing new rules on what equipment could be brought into the Zuccotti Park, and allow OWS protestors back into their camp with all of their belongings.

Police have yet to allow protestors back, however, as the order has been challenged by Bloomberg and is currently in a state Supreme Court hearing.

Tuesday’s raid came amidst similar crackdowns in other cities with large occupations, like Oakland, Portland and Denver, and two days before Nov. 17, the two-month anniversary of OWS, on which protestors have called for a “day of action”.

“It’s pretty likely that this was timed to try to take the wind out of the sails of the planned march to shut down Wall Street on Thursday. That’s the kind of thing Bloomberg has done in the past,” said Nathan Schneider, editor of the website Waging Non-Violence.

“But from the feeling on the streets today, it will have the opposite effect and strengthen the numbers on Thursday,” he said.