BUENOS AIRES, Dec 28 2011 (IPS) - A growing number of municipalities in Argentina are joining a movement aimed at tackling the problem of waste disposal while producing clean, inexpensive energy. 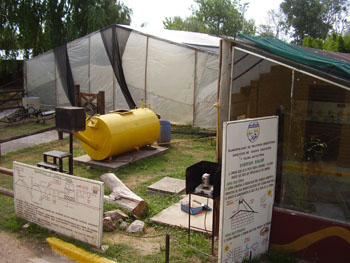 An experimental biodigester is used to heat the boa snake enclosure at the Yku Huasi Zoo Farm in the province of Buenos Aires. Credit: Juan Moseinco/IPS

Since 2006, more than 650 people have taken part in biogas production courses offered by the Fundación Proteger (Protect Foundation) in the municipality of Cerrito, in the eastern Argentine province of Entre Ríos. With a population of 6,000, Cerrito currently has two biodigesters in operation and a third under construction.

A biodigester is an air-tight tank into which organic wastes like manure and plant wastes are placed, along with anaerobic bacteria which digest the organic matter and produce methane gas and fertilizers rich in nitrogen, phosphorus and potassium.

“The biogas is used for cooking, heating and generating electricity,” engineer Leonardo Genero, coordinator of the foundation’s Socially Appropriate Technology Programme and of the training offered in Cerrito, told Tierramérica.

The training courses have been attended by municipal authorities and technical personnel, professionals, students, farmers and educators from at least a dozen provinces in Argentina, as well as Bolivia, Chile, Paraguay, Peru, Uruguay and Spain.

“It is a surprising phenomenon that has particularly taken off in the last two years,” Fundación Proteger general director Jorge Cappato commented to Tierramérica. The issue of organic waste is one in which “everything still needs to be done,” he added.

In addition to Cerrito, biodigester technology has also been adopted by the municipalities of Emilia and Zenón Pereyra, in the northeastern province of Santa Fe, and others that are conducting tests with small reactors.

Cappato explained that municipal waste is usually either burned or deposited in open-air dumps. In the best of cases, it is disposed of in sanitary landfills, a method aimed at preventing the contamination of the soil and underground water sources, but which poses other risks and is costly.

Genero noted that biodigesters can be built for an individual house, a school, a farm or an entire neighbourhood. “The training course targets remote rural areas that don’t have easy access to bottled gas or bags of fertiliser,” he said.

Moreover, “it is one of the few technologies that help to mitigate climate change because it does not produce any greenhouse gas emissions,” he stressed.

In Argentina, a country of 40 million people, there are only between 70 and 100 biodigesters currently in operation, said Genero. However, unlike the European cities that have adopted this technology, the potential for organic waste material in this region is enormous.

The mayor of Cerrito, Orlando Lovera, told Tierramérica that “there is an extremely high level of awareness in the city about putting waste to good use and taking care of the environment.”

One of the biodigesters, built though an agreement between the Fundación Proteger and the Universidad Nacional del Litoral, operates in a housing complex for 300 people next to the railway station, used as accommodation for sports teams and cultural delegations visiting Cerrito. It provides all of the housing units with fuel for heating and cooking.

Another reactor operates in a semi-rural neighbourhood and supplies gas and electricity to its school.

The third, currently under construction, is the most ambitious and has sparked the greatest enthusiasm among local residents. It is designed to run on organic waste from 10,000 people, 68 percent more than the current population, and will heat one of the swimming pools and light the stadiums in the local sports complex.

The biogas produced is not enough to allow for total self-sufficiency or completely replace the use of bottled gas, but it does make a contribution and also solves the problem of organic waste, said Lovera.

Cerrito has a sanitary landfill for organic waste, which could become unnecessary once the third biodigester is completed, as well as a recycling plant where glass, cardboard and plastics are processed for subsequent sale.

“What motivates a lot of other municipalities to come to the courses is the fact that very little investment is needed, which means they can do it with their own resources,” Lovera explained.

Biologist Viviana Granados, from the municipality of Malvinas Argentinas in the province of Buenos Aires, took the course offered by Fundación Proteger and was able to build a biodigester at the Yku Huasi Zoo Farm, located in the city of Ingeniero Pablo Nogués.

“We were looking for environmental solutions for urban solid waste,” she told Tierramérica. The first step was to initiate the separation of waste at the source, followed by the design of a biodigester for the zoo.

“The idea was to heat the enclosure where the boa snakes are kept, since they need warmth,” said Granados. The organic material used is manure from the cows living on the same farm.

The small reactor, built from an old boiler with a 2,000-liter capacity, requires 50 liters of manure daily to operate. The quality of the gas produced is excellent, said Granados. “A totally blue flame, with a high amount of methane.”

But this initiative has not given rise to a wider effort to process all of the waste in Ingeniero Pablo Nogués, a city of 320,000 people.

Nevertheless, said Cappato, there has been “a change in mentality.”

The fertiliser produced is used in municipal gardens and greenhouses. And awareness has been raised about the need for natural reserves for ecotourism, the creation of “green jobs” and the use of native tree species in public green spaces, he noted.

“Political leaders are highly motivated by the courses, and we are thinking of launching a network in 2012 of environmentally friendly municipalities that comply with certain requirements, commitments and budgetary allocations,” he announced.