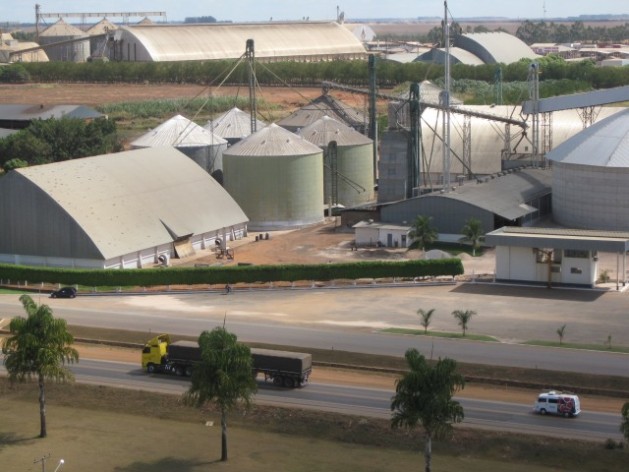 RIO DE JANEIRO, Dec 12 2011 (IPS) - Brazil aims to meet its climate change targets in agriculture by stimulating techniques that have been proven to reduce greenhouse gas emissions – but which may increase the use of toxic agrochemicals, activists say.

Direct seeding, restoration of grasslands, crop-livestock-forest integration, biological nitrogen fixation, commercial reforestation, and biogas production from animal waste are practices that can be financed by a soft credit line available since August.

The government’s Low-Carbon Agriculture Programme (ABC) aims to reduce carbon equivalent emissions by up to 176 million tons by the year 2020.

At the U.N. Climate Change Conference in Copenhagen (COP15) in 2009, Brazil assumed a voluntary commitment to reduce carbon emissions by 2020 by between 36.1 and 38.9 percent.

That would reduce carbon equivalent emissions by 1.17 to 1.26 billion tons, depending on the economy’s growth levels.

A curb on deforestation will make the biggest contribution to that goal. The National Policy on Climate Change adopted in December 2009 requires the annual deforestation rate in the Amazon rainforest to be cut 80 percent by 2020, from the 1996-2005 average.

He told IPS the loans would have “three advantages”: a 5.5 percent annual interest rate, which is lower than the current inflation rate, a pay-back period of 15 years, and a grace period of eight years.

The loans are to foment these practices, especially the restoration of grasslands: 15 million hectares of degraded grasslands in 10 years, which would amount to 60 percent of the agricultural target, said Brandão.

Direct seeding has already become widespread in Brazil in the last few decades, with the no-till system currently used on some 25 million hectares of land – nearly half of the total area planted to grains, said Brandão. The idea is to increase that area by eight million hectares, by 2020.

But this practice will lead large-scale agricultural producers to increase the use of pesticides and fertilisers, used in no-till chemical fallow to kill or prevent all vegetative growth, as well as fungal diseases that thrive in the warm, moist conditions under the post-harvest stubble, said forestry engineer Luiz Zarref.

The production of chemical fertilisers and pesticides releases greenhouse gases into the atmosphere that have a much more intense impact on the climate than carbon dioxide (CO2), such as nitrous oxide (N2O), 300 times more potent than CO2, Zarref, an activist with the global movement of peasants, small-scale and family farmers Via Campesina, told IPS.

However, the ABC programme will offset part of that increase by providing incentives for biological nitrogen fixation, a technology developed by Brazil’s governmental agricultural research agency, Embrapa, that significantly reduces the use of nitrogen fertiliser by using bacteria to trap nitrogen from the air and fix it in the soil.

But aside from soy, which has nitrogen-fixing properties, this technique is still just “a promise” in terms of other crops, said Jean Marc von der Weid, founder and head of the Advisory Services for Alternative Agriculture Projects (ASPTA), a non-governmental organisation that supports family agriculture and agroecology.

He argued that soft small or medium loans are not enough to overcome what he described as complex barriers to the expansion of direct seeding, the recovery of degraded land, and crop-livestock-forest integration.

Activists criticise the failure to incorporate agroecological practices in the government’s ABC programme, which Zarref said was designed for “latifundios (large landed estates) and monoculture.”

Agroecology, he added, is “a complex alternative that depends on the deconcentration of land ownership, the diversification of production, and avoiding the use of chemical and industrial inputs” – goals that he said are not in line with the spirit of the ABC.

The Agriculture Ministry’s Brandão, on the contrary, says the programme is aimed at small and medium-scale farmers, because it offers a maximum loan of one million reals (550,000 dollars) in order to better distribute the available resources. “The big agribusiness interests have other sources of credit,” he argued.

Above and beyond the ABC programme, the climate crisis opens up “new opportunities” for agriculture and agricultural research in Brazil, said the head of Embrapa’s environmental centre, Celso Manzatto.

It is a question of developing “green agriculture”, a concept that encompasses, for example, efficient, slow-release “smart fertilisers” and payments to farmers for environmental services, such as preserving forests.

Increasing productivity is one way to mitigate global warming, and in agriculture there is a huge margin for that kind of progress, said Manzatto, who for 16 years has been a researcher at Embrapa, which played a decisive role in turning Brazil into an agricultural powerhouse.

There are many places in Brazil where extensive livestock production averages one animal per two hectares. That means it would be easy to double productivity, which could have a significant impact on aspects that affect the climate, like deforestation caused by the clearing of rainforest to create pasture for cattle, he said.

The ABC programme requires a major effort to transfer technology, especially to small farmers, who in the past were excluded from the benefits of progress made, even by Embrapa, he acknowledged.

Adapting agriculture to climate change also opens up major opportunities for Brazil, which overcame the “nearly impossible” challenge of developing agriculture in tropical areas that is able to compete with the large temperate-zone agricultural producers, Manzatto said.

Brazil assumed its commitment to cut carbon emissions to contribute to a global agreement that would help keep the average global temperatures from increasing more than two degrees Celsius this century. It is a voluntary target adopted by a country that does not have to make a binding commitment because it does not belong to the industrialised world.

The reduction of deforestation in the Amazon jungle in the past few years has strengthened Brazil’s image in the climate change talks. But criticism from environmentalists is mounting because of the reform of the forestry code winding its way through Congress, which would make it easier to clear land in the Amazon jungle for agriculture and would ease the penalties for landowners who destroy woodlands.