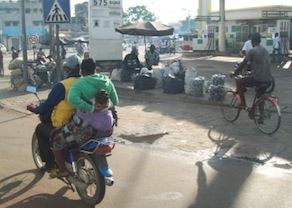 To bridge their shortfall, delegates at the 17th Conference of Parties (COP 17) climate talks proposed on Wednesday to address this so-called “emissions gap” at COP 18 in Qatar next year.

Documents under negotiation in Durban, South Africa acknowledge the science-based emissions reduction target of 25 to 40 percent by 2020. Those reductions and that timeline are what is needed to stay below two degrees Celsius. The draft text says this would be the target to be agreed on at COP 18.

“We need agreement on that science-based target next year at the latest,” said Karl Hood, Minister of Foreign Affairs of the Caribbean island of Grenada and representing the Alliance of Small Island States.

“And we want those targets to legally come into force before 2017.”

Hood told IPS waiting to close the gap until after 2020 is “unacceptable” and a “disaster for small island states” who are already suffering the impacts of climate change.

The world has months to curb emissions from burning fossil fuels before two degrees Celsius of warming will be impossible to stay below. Delay a few years and the extraordinary emission cuts needed could bankrupt the world’s economy and reverse development gains in most countries, climate experts warned at the largely deadlocked United Nations climate change conference here.

“We’re here to warn policy makers that we are dangerously close to not being able to meet the less than two degrees Celsius target,” said Bill Hare, Director of Climate Analytics, a non-profit climate science advisory group based in Germany.

The current pledges made by countries to cut emissions after the Copenhagen climate talks in 2009 will result in global warming of 3.5 degrees Celsius, said Hare a climate scientist. Two years later, those pledges remain essentially unchanged and that means the world’s options to stay below two degrees Celsius are narrowing Hare said in press conference during the COP 17 negotiations that conclude Friday.

“To put it bluntly, the longer we wait, the less options we will have, the more it will cost …and the bigger threat to the world’s most vulnerable,” he said.

Global emissions of fossil fuels have increased 49 percent since 1990 and reached a record of about 48 gigatonnes (billion tonnes) of CO2 in 2010 and likely 50 gigatonnes (Gt) of CO2 this year, he said. Thanks to the moderating affect of the oceans, the world has warmed only 0.8 degrees Celsius on average, however, many parts of the world are much warmer than that.

The science shows that global emissions need to fall to 44 Gt by 2020 and continue to decline by two percent per year, a rate that our fossil fuel-dependent world will find “extremely challenging” but still doable, he said.

If countries live up to their pledges made in Copenhagen global emissions are likely to rise nine to 11 Gt above the 44 Gt target creating an “emissions gap” that is quite considerable, said Niklas Höhne, Director Energy and Climate Policy of Ecofys, an energy consulting organisation.

“Our results are in agreement with the United Nations Environment Programme (UNEP) Bridging the Emissions Gap Report released at the opening of the Durban climate talks,” he told IPS.

The new UNEP report calculates a similar emission gap and outlines the way reductions can be made between now and 2020 to bridge that gap. Shockingly many of the items under intense debate at here at the COP 17 – biofuels, agriculture, carbon credits for forest protection, carbon capture and storage – are not considered important pathways to reduce emissions by scientists.

“With biofuels you have to be very sure they won’t result in a net increase in emissions,” said Höhne.

A number of new studies of palm oil biodiesel and maize ethanol show their net emissions are higher than fossil fuels when their entire lifecycle is calculated.

Biofuels are unlikely to be a significant method for reducing emissions, agreed Höhne. Agriculture is in the same category. Farming practices could be altered to reduce emissions but based on analysis using various reduction scenarios they would only be a small part of the “bridge”.

The emissions gap can only be bridged with a combination of improving energy efficiency in all sectors, significant increase in renewable energy including biomass power and shifting from coal to natural gas. The cost of making this shift is relatively low at 38 dollars a ton of CO2 avoided.

Wait until after 2020 and costs skyrocket. Every every dollar not invested today to reduce emissions from the power sector will require an additional investment of 4.3 dollars after 2020 to compensate for all the additional emissions between now and then said the International Energy Agency in its “World Energy Outlook 2011” report.

Waiting till 2020 is “a risk we don’t want to take,” said Höhne. Delegates here do understand all this, he believes. “They don’t act as if they understand,” he said referring to the lack of progress on a deal to substantially reduce emissions despite 17 years of negotiations.

These scenarios do not include potential emissions from natural sources — feedbacks — like thawing permafrost as the Arctic region rapidly warms. Permafrost hold huge volumes of carbon and methane accumulated over the past 750,000 years.

The first estimate of the near-term volume of global warming gases from permafrost thaw may be 170 Gt of CO2 over the next three decades a team of 40 scientists reported last week. That means global warming could be “20 to 30 percent faster than from fossil fuel emissions alone,” said Edward Schuur of the University of Florida in a release.

“At the moment climate change is not high on the agenda of all heads of states,” said Höhne.