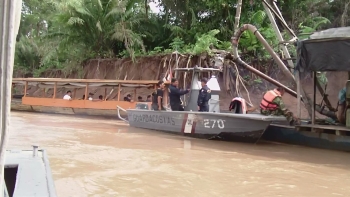 LIMA, Dec 2 2011 (IPS) - The armed forces in Peru, which already have an active role in fighting drug trafficking, are being given greater responsibility for maintaining public order under the government of President Ollanta Humala. They will now also be expected to crack down on illegal mining, and to intervene in social protests.

In the Apurímac and Ene river valleys (known as the VRAE region), which occupy parts of the Ayacucho, Apurímac and Cuzco regions in the south of the country, the armed forces have been fighting a remnant of the Maoist Sendero Luminoso (Shining Path) guerrillas for several years, destroying clandestine cocaine processing labs, seizing drugs and capturing national and foreign drug trafficking suspects.

The rationale is that in the VRAE, Sendero guerrillas are allied to the drug traffickers, so the military is fighting what are termed “narco-terrorist enemies.” These military operations were stepped up in 2008, during the 2006-2011 government of Alan García.

Between Oct. 7 and 12, army troops seized 1.5 tonnes of cocaine and arrested a group of suspected traffickers headed by a Colombian who was operating in the VRAE.

And in the first week of November, 2,000 soldiers launched a major operation against illegal miners’ settlements on the main rivers of Madre de Dios, a jungle region in the southeast, bordering Brazil and Bolivia.

Unauthorised gold mining in Madre de Dios has a serious impact on the environment because of the intensive use of mercury, heavy dredging equipment and deforestation of pristine jungle.

Military action against drug trafficking and informal mining is carried out within the scope of the law, the defence minister, retired general Daniel Mora, told IPS.

“The armed forces act in accordance with the decisions of the authorities. Military interventions are carried out strictly under the rule of law. We take action because the law authorises us to do so, and we do not transgress the bounds of our established duties. The armed forces do not seek confrontations with the civilian population; that is what we like least,” said Mora.

“Not only do we require an order,” he added, “we intervene only if the conditions are right. We do not want any human rights problems. That’s why we act only where an illegal situation exists.”

The government of President Humala, a retired army officer who took office Jul. 28, apparently wants to widen the scope of action of the armed forces.

Mora himself, who is also a Congressman and a member of the Congressional Defence Commission, voted in favour of a draft law that would expand the attributions of the armed forces to include breaking up social protests that “disturb the peace.”

On Nov. 22, the Defence Commission approved the bill, which empowers the armed forces, in areas where a state of emergency has been declared, to take control of internal order and governing of the zone, and carry out military actions with the support of the national police to maintain internal order; and they may use force in the face of other “violent situations,” the bill says.

In areas where a state of emergency has been declared, depending on the circumstances, the police may be subordinated to military command, says the bill.

According to the Ombudsman’s Office’s monthly report, in October there were 217 social conflicts nationwide, 154 of them active and 63 of them quiescent. Of the total, 124 were related to socio-environmental issues arising from extractive industries.

The bill also provides a legal framework for military participation in anti-narcotics operations.

In areas where an emergency has been declared, the armed forces – whether or not they are in overall control of public order – are empowered to carry out ground, sea and air interdiction of suspects of illegal drug trafficking, the text says.

The expansion of military powers with regard to public order is supported by representatives of the governing party, Gana Perú, and of Fuerza 2011, the party of former president Alberto Fujimori (1990-2000), who is serving prison sentences for crimes against humanity and corruption.

Together, the two parties have a majority in Congress, but the bill may also have support from smaller parties which usually back the government, like Perú Posible, the party of former president Alejandro Toledo (2001-2006), to which minister Mora belongs.

The militarisation of public order is being encouraged and social protests are being criminalised, said Aldo Blume, a researcher at the Legal Defence Institute (IDL), a local human rights organisation.

The bill augments legislative decree 1095, signed Aug. 31, 2010 by then president García, which opened the door for the military to exercise these new roles.

This phenomenon “does not belong in a democratic regime where the rule of law prevails,” Blume said in a commentary published on the IDL web site.

“It is true that public insecurity and the fight against crime, especially drug trafficking, are ever more complex problems, but repressive measures and restriction of civil rights are not the solution,” he added.

In the view of analyst Javier Azpur, coordinator of the Citizen’s Proposal Group (GPC), a coalition of NGOs active around the country, the Humala administration has a tendency toward militarisation.

During his electoral campaign, Humala promised that the defence and interior ministries would be run by civilians. But the present ministers, Mora and Óscar Valdés, respectively, are retired military men.

“It is fairly clear that the president wants to give the armed forces a significant role in spheres he regards as crucial to his administration. This seems to be due to his own training and background, as well as out of conviction,” Azpur told IPS.

“The army has a strong influence in the work of the interior ministry. It is also apparent that the presence that the military had in the VRAE under the previous government has been expanded. In addition, they have a leading role in the necessary fight against illegal or informal mining,” he said.

On Nov. 24, local people in the northern highland region of Cajamarca began an indefinite strike against the Conga gold mining project, which is jointly owned by U.S. mining giant Newmont and Buenaventura, a Peruvian company.

Local small farmers oppose the mining project in the area, because it would involve moving the water from four lakes high in the mountains into reservoirs the company would build, and the water displacement would affect an important aquifer and reduce water availability in the area.

Denying rumours that 2,000 soldiers had been sent to Cajamarca, the chief of the armed forces joint command, General Luis Howell Ballena, stated that “if the police feel they are being overwhelmed, they can apply to the president” for military support.

“If the armed forces intervene, it would mean the end of Humala among the rural sectors that gave him mass support, and of the strategy of dialogue and political solutions that the government has promoted,” said Azpur. “His avowed aim of representing the interests of the poor would lose credibility.

“To impose the Conga project by means of intense repression would mean adopting the policy forced on the country since the Fujimori regime. Broad sectors of society would view (Humala) as just another representative of the economic powers-that-be,” Azpur warned.