UNITED NATIONS, Dec 28 2011 (IPS) - Most of the cases brought before the Hague-based International Criminal Court (ICC) include gender-based crimes, but advocates say the court is still falling short in ensuring that women play an active role in decision-making and outreach at the highest levels. 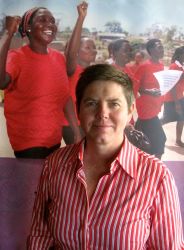 The ICC has made progress on some issues. With her election on Dec. 1, Fatou Bensouda became the first woman and the first African to be appointed chief prosecutor of the court, which focuses on genocide, war crimes and crimes against humanity.

“It is hugely symbolic that a woman has been elected,” said Brigid Inder, executive director of Women’s Initiatives for Gender Justice, an international rights organisation that advocates for gender justice through the ICC and domestic mechanisms in Uganda, the Democratic Republic of Congo, Sudan, the Central African Republic, Kenya, Libya and Kyrgyzstan.

“It is a wonderful and historic moment,” Inder told IPS.

However, she said access and outreach to victims remains a challenge, and noted that there is currently a huge backlog of 6,000 victims’ applications which have not been processed by the court.

Q: What is the link between the number of women in the ICC staff and the treatment of gender issues at the court? A: There are two issues: one is gender equality and another is gender competence. From our review and analysis of the court, we can see that the gender equality issue is good overall but we still found differences when we looked at the positions to which women are appointed. They tend to be clustered in the lower to mid-level positions, with few women appointed at (higher) level decision-making or leadership positions.

Gender equality is also about structural power within the hierarchy and not only the number of women appointed to positions. It is also about the capacity and opportunity for women to contribute to key decision making moments: the identification of cases, the construction of case hypotheses, the decision regarding the construction of charges. We need more improvement in those areas to increase the court’s gender capacity.

The second area touched upon is gender competence and this involves both men and women. Specifically, gender competence refers to the ability to identify and understand the gender implications and dimensions of all of the work of the ICC, and the different ways in which women and men, boys and girls, are affected by the kinds of violence that have been committed in conflicts.

And we see this as a responsibility for both men and women. When we talk about the gender competence of the court, we are referring to its ability as an institution to deliver gender-inclusive justice.

Q: Would a quota policy and affirmative action be an effective solution? A: One of the key advantages of the Rome Statute (the treaty that created the ICC) is that it explicitly identifies the need for gender legal advisers and for people to be hired with expertise in addressing sexual violence, including sexual violence committed against women and children.

The statute itself requires this expertise to be a part of the development of the institution. We think that this can certainly help in terms of women being appointed, but there is also a general article in the Rome Statute requiring fair representation, that is to say geographical representation so that States Parties are fairly represented in the staff of the ICC, and also a fair representation of men and women.

So there is a structural requirement for the court to address these issues and, I think, in a very positive and helpful way. It doesn’t mean a forced and false construction of creating special conditions, it is instead a recognition of the right of men and women to be appointed to those positions and also the need for the necessary capacity around sexual violence against women and the capacity to provide legal advice on gender issues that is a requirement of the statute itself.

Q: Is there a gap in terms of outreach and access for women victims? A: We have seen in our review of the ICC that 29 percent of the participants in the ICC outreach activities are women. That is a very low number: less than a third of the participants are women. And when you look at the cases before the ICC, almost all of them include charges of gender-based crimes.

There is a mismatch between the people who are victims of the crimes, the charges in the ICC cases, and those who are being reached by the court’s outreach activities. We can also see that there is a lower number of women who are applying to the court to be recognised as victims and who have been formally recognised to participate in the ICC cases.

There is a direct link between information, outreach and access. The court needs to develop more women-specific meetings and strategies, and to be more creative in the fora they are providing in order to reach women who may have less access to mainstream forms of media and formal communication systems within villages and communities. It appears women are requiring strategies that will allow them to access this information directly.

Q: Does the situation most often concern less developed countries? A: All of the conflict situations right now that are situations under investigation by the court would be described as developing countries. The court is also working in countries that have experienced long periods of armed conflict, which has usually caused disintegration of public institutions and infrastructure.

Often the security sector, including the police force, is no longer functioning. In many instances, the judicial system is also not operating or is functioning with high levels of corruption. The structure of communities has disintegrated from decades of conflict and suffering.

Q: How open has the ICC been to recommendations of your Gender Report Card since 2005, and have you seen any progress? A: We have seen progress over the seven years we have been reporting. The court has been in existence for almost 10 years. Certainly, they are learning lessons. Some lessons they are learning slowly, and in some areas these lessons are absorbed, while in other areas it appears the lessons are bound for unfortunate repetition.

It is an institution that is continuing to grow and develop and learn. We can see that they are being increasingly responsive to our advocacy around investigating and prosecuting sexual gender-based crimes, which have now been charged in six of seven situations and in eight of 14 cases.

The ICC has the best record in relation to charging the gender-based crimes of any of the international tribunals. The challenge for the court now is the quality of the charges and the efficacy of the prosecution strategies. This is where they have been slow to learn some of the lessons.