WASHINGTON, Jan 30 2012 (IPS) - Two days after some 400 people were arrested during a protest organised by Occupy Oakland on the U.S. west coast, members of Occupy DC say they have no plans to leave despite the threat of police action. 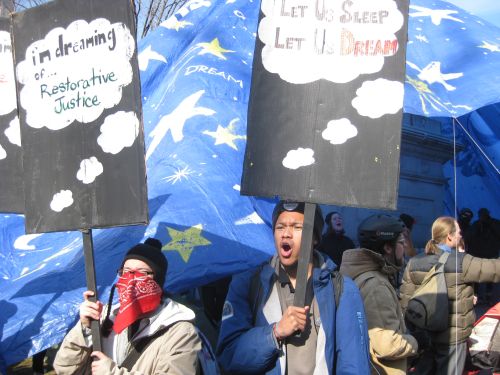 Protesters have been camping out at McPherson Square since October. Credit: Amanda Wilson

Gathered at McPherson Square in Washington, most were unfazed by the National Park Service’s intention to enforce a “no camping” rule starting at noon on Monday. The occupiers gathered under a “Tent of Dreams”, a blue tarp over a statue, to showcase solidarity and waved slogans that read “Eviction? Bring it!”

“We are going to take a stand and stay as long as possible,” Carla Boccella, a registered nurse, told IPS.

The protesters have been camping out at McPherson Square since October without any Park Service action. The enforcement follows a House oversight subcommittee hearing where Republican lawmakers, led by Rep. Darrell Issa, questioned why the occupiers were allowed to disregard a no-camping rule on Park Service property.

An Occupy DC press release stated that the protesters will “defend the public space we have used as our center for activism” and “peacefully resist this politically motivated attempt to suppress the free speech of the disenfranchised 99%.” Some protesters even expected arrests.

“I think it’s going to get to arrests, maybe not in the morning. I think the stance the occupiers have taken is almost a challenge to the government. I do think that there will be a crackdown,” Boccella told IPS.

The protesters won’t be evicted, but they could be subjected to citations or arrests if they continue to camp.

The occupiers have no intentions of abandoning the site completely. James said he’d sleep on the sidewalk in front of the public library with fellow “homeless bothers and sisters” and come back to the site during the day. Similarly, many protesters are looking for places to stay around the park.

“I think there are some plans for people to stay around the park. I think people are also looking at other places to occupy in the city. I know some of the occupiers have relocated to warmers locations and are planning on coming back in spring so they may even try to re- encamp,” Boccella told IPS.

Along with the protesters, the homeless are also significantly affected by non-camping laws. According to the National Coalition for the Homeless, city ordinances prohibiting camping in certain public places are a prominent tool to indirectly criminalise homelessness.

There are an estimated 6,500 homeless people living in D.C., which has the third worst poverty rate in all of the U.S., according to Census Bureau data. Unemployment rate in the District’s Ward Eight is highest in the nation. There’s a wide income gap between the District’s rich and the poor, and one of the widest income gaps between whites and blacks in the country.

Some of the local homeless eagerly joined when the politically- homeless occupiers started erecting tents in areas they often frequented. The occupiers shared free meals and donated clothing with the homeless and helped them with free medical help. The homeless depended on such services that were not provided for them by the government, Boccella told IPS.

The protesters were composed mostly of young people and college students, some older individuals, a few hippies and a handful of homeless people. Protesters like Boccella, a nurse, made sure the occupiers had their basic first aid needs met while advocating for healthcare for all.

Some others, like the elderly Jan Chastain who sat knitting near the library tent, came to the site everyday to cook meals and give her support for the political causes.

“People have said that they can’t describe the occupy movement with one word. I think there is a word to describe it: Justice,” Chastain told IPS.

Non-member volunteers, like Justin Martin from the Unitarian Universalist Congregation that provided full meals to the occupiers, stood by the “Tent of Dreams” to support the protesters’ right to stay in the park.

“I think the Occupy movement itself has grown beyond the people sleeping on the ground. I think nothing is going to stop that. I think it’s wonderful to have people here reminding us every day about income inequality, about corporate control of our country, and I hope that they get to stay,” Martin told IPS.

Many cities have ramped up Occupy evictions in the past months, claiming health and safety concerns or municipal code violations.