ACCRA, Feb 29 2012 (IPS) - When Jack Sabadgou left Ghana for Switzerland 10 years ago, he left his infant daughter behind to be raised by her mother. Now he wants his child back, and he is running out of time in a bid to save her from the banned traditional practice of female genital mutilation. 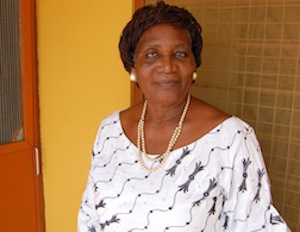 Florence Ali, the president of the Ghana Association for Women’s Welfare, has dedicated her life to the fight against female genital mutilation. Credit: Jonathan Migneault/IPS

Sabadgou’s daughter, Yuma, is now 13 years old and she lives in the village of Bawku, in northern Ghana, where people still adhere to traditional practices, including FGM. After Yuma’s grandmother was diagnosed with breast cancer, she blamed her illness on evil spirits, which, she claims, punished her because her granddaughter has not yet been cut.

“The issue is a sickness,” says Sabadgou from his home in Switzerland. He says his mother does not understand that her cancer has nothing to do with evil spirits or her granddaughter.

“I don’t want to lose two people,” he says, fighting back tears. “I love them both.”

Female genital mutilation was criminalised in Ghana in 1994. The United Nations and the World Health Organization (WHO) have condemned the procedure, which involves the removal of a woman’s external genitalia, including the clitoris and inner labia.

The WHO says the practice has no health benefits and causes only harm. It can result in recurrent bladder and urinary tract infections, cysts and infertility.

But in villages like Bawku, the practice continues in secret.

And Sabadgou’s desperation to save his daughter from this is palpable even a continent away.

Sabadgou returned to Ghana in early February to gain legal custody of his daughter so that he could take her to safety in Switzerland. He filled out paperwork and spoke with Bawku’s leaders about his concerns with FGM, but his pleas fell on deaf ears. He has since returned to Switzerland.

In Ghana’s northern regions FGM is generally practiced between December and February. Sabadgou believes his daughter has until December before her life will irreversibly be changed for the worse.

Florence Ali, the president of the NGO the Ghana Association for Women’s Welfare, has been Sabadgou’s only ally in Ghana.

Before dedicating her life to the fight against FGM, Ali was a midwife. Women and their unborn babies died in her care due to complications from female genital mutilation.

One woman was not able to deliver her baby due to the scarring of her vagina. Ali was not equipped to do a Cesarean section and the mother and child died.

Mariama Yayah, the director of Ghana’s Department of Children, says FGM is practiced in Ghana to strip women of sexual pleasure and ensure they stay faithful to their husbands.

Many in Ghana’s northern regions see the practice as a normal part of womanhood, she says.

Sabadgou plans to return to Bawku in December to let the girls there know that the practice is not acceptable.

“It’s going to be a fight,” he says. “It’s not going to be easy.” He says no one in his village supports his stance against FGM. But it is a belief, he says, that he is prepared to die for.

In Ghana, people who practice the banned procedure can serve five to 10 years in prison if they are prosecuted. But authorities are not doing enough to curb the practice, says Sabadgou.

The WHO estimates that 92 million girls in Africa over the age of 10 have undergone FGM and there are only 22 countries on the continent that have laws against the practice. Mali, for example, has no law banning female genital mutilation.

In 2008, the World Health Assembly passed a resolution to eliminate female genital mutilation.

Ali says that in 2011 an assembly of African leaders in Malabo, Equatorial Guinea, supported a draft resolution from the U.N.’s 66th ordinary Session of the General Assembly to ban FGM worldwide. “We are hoping that at the next General Assembly meeting, we (will) have a worldwide ban on FGM,” she says.

For Sabadgou the fight against FGM in Ghana starts with awareness. “We need to talk about the issue,” he says. “It needs to start now.”

He says the country’s media has not done enough to denounce the custom and he wants ministers from Ghana’s northern regions to discuss the issue in parliament.

Ghana’s Department of Children has done advocacy on the issue but its resources are limited.

Ali’s organisation is even more strapped for cash. She has a cramped office next to a schoolyard in Accra. Hundreds of children play in a football field outside while she raises her voice to discuss her fight against FGM over the surrounding noise.

“It is not easy to combat FGM but we are still fighting to flush it out of the system,” Ali says. “We have a long way to go to fight against FGM. Everybody has a role to play.”