VIENTIANE, Feb 2 2012 (IPS) - A landmark concert featuring artistes from eight of the ten South East Asian Nations (ASEAN) took place here on Jan. 21, in an effort to build a regional community through the common language of music. 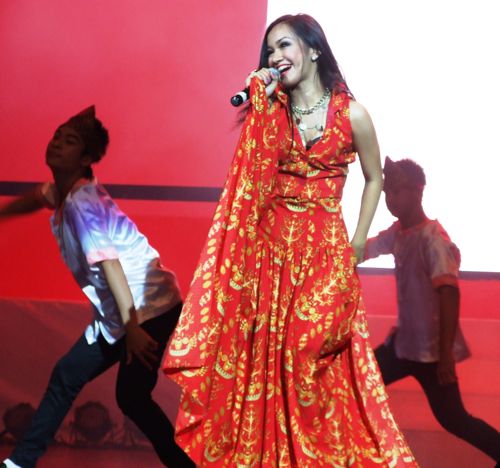 Still, the performers and the organisers of the event agree unilaterally that regional governments need to play a major role in promoting this shared culture through dedicated national efforts.

“Laos took the initiative in organising this first ASEAN concert and we hope other member countries will take turns hosting the event every year,” Khamphanh Phonthongsy, the Lao representative on the cultural sub-committee of ASEAN’s committee of culture and information (COCI) told IPS.

Organized by the Lao ministry of information, culture and tourism, the concert featured representatives from Indonesia, Thailand, Vietnam, Brunei, Philippines, Malaysia, Laos and Cambodia. Singapore and Myanmar were the only countries that did not send performers.

Each country artist sang two songs, one in their own language and one in English.

Though there was no live orchestra, most of the musical numbers were accompanied by dancers adorned in their traditional dress, which added extra colour to an already vibrant evening.

“All the dancers were local,” explained Phonthongsy. “ASEAN performers sent us DVDs of their dance routines and we trained Laotian dancers to perform them.”

The singers and dancers only rehearsed once together the day before the concert. The smooth movement of the Laotian dancers on stage proved that there are deep similarities between the musical cultures of the regions.

“I used to search YouTube for ASEAN music but now I can experience it for myself. I (was) so excited to be part of this first ASEAN concert and think we need to do more,” said Laotian pop star Tee Oudalai.

Vietnamese pop star Lo Ngoc Hau agrees. She said that TV channels in her country do not air musical programmes from other countries in the region. “I have to listen to CDs (to find out about ASEAN music),” she lamented.

The Lao national television network ran a live broadcast of the two-and-a-half-hour concert from the national cultural hall in Vietiane and beamed the show to 20 other countries via satellite feed.

Sadly, the Lao organisers told IPS, no other member country took up the feed to broadcast it on their local channels.

Filipino artist Jan Pablo argues that the common denominator for most ASEAN countries is agriculture, a theme that runs through many of the region’s traditional folk songs. Though most of the performers sang in different languages, Pablo believes this common theme could be exploited to bond the region together via musical exchange.

“We can influence people though music,” he told IPS. “But we need more publicity and promotion. Government radio stations must help in this, since we cannot expect commercial radio to make us popular.”

The concert reflected the rich diversity of ASEAN music, featuring numerous items that could potentially become cultural hits in the region.

Speaking to IPS after the concert, Brunei pop star Putri Noriza said that the audience seemed excited by the songs “because they came for a cultural exchange.”

However, she isn’t sure the time is ripe for introducing the Malay dangdut or joget rhythms – popular dance forms with beats as infectious as Indian bhangra or Latin America’s lambada – as a form of dance music for the region, even though Indonesian singer Indri Tribuana received an encore for her dangdut performance.

“Some say that they don’t like it, but when they hear it for the first time they change their minds,” noted Tribuana. “I chose dangdut because it represents my country and most Indonesians love it.”

Pablo argues that the domination of Anglo-American recording companies in the region has made it very difficult for someone singing in their local language to make it big in the region.

Even within the Philippines, he complained, most commercial broadcasters prefer English music because they believe it will generate the most revenue.

“If you want to become popular singing original Filipino music you have to do it through the pubs and the underground (music scene) – not commercially,” he stressed.

The omnipresence of Western music in the region was a primary reason for organisers’ stipulation that each artist performs one of their two songs in English.

But though this is the official language of communications within the regional bloc, few of the performers were fluent in it. Despite memorizing English songs using CDs, these performances paled in comparison to the numbers done in a local language.

ASEAN has set 2015 as the date for integrating the ten nations into one community, but often music and culture take a backseat while business people and politicians discuss trade and economic integration.

The COCI was set up in 1979 with the aim of promoting regional integration through cultural exchanges. It acts through national committees, which usually function under their respective information or cultural ministries.

However, prior attempts to unify the region through music, like the ASEAN Golden Voice Festival pioneered by Vietnam in 2008 or Thailand’s 2009 ASEAN concert in honour of King Bhumibol Adulyadej’s 60th anniversary of coronation, did not make it onto COCI’s official ASEAN calendar.

Khamphou Phiasakha, secretary for ASEAN COCI said that he was awaiting approval of next year’s concert from the committee of permanent representatives to ASEAN at their meeting in Thailand later this year.